The Jaguar AJ-V8 is a compact DOHC V8 piston engine used in many Jaguar vehicles. It was the fourth new engine type in the history of the company. In 1997 it replaced both designs previously available on Jaguar cars: the straight-6 Jaguar AJ6 engine (or rather its AJ16 variant), and the Jaguar V12 engine. It remained the only engine type available on Jaguar until 2002, when the Jaguar AJ-V6 engine was added to the list. The AJ-V8 is available in displacements ranging from 3.2 L to 5.0 L, and a supercharged version is also produced. Ford Motor Company used this small V8 in other products as well, including the Lincoln LS the 2002-2005 Ford Thunderbird as well as in several Land Rovers.

The AJ-V8 was designed to use Nikasil-coated cylinders rather than the more-common iron cylinder liners. However, like the BMW M60, high-sulphur fuel reacted with the Nikasil liners and caused engine failures. Jaguar replaced affected engines, and has used conventional cast-iron linings ever since.

The engine uses a two-state Variable Valve Timing system to switch the intake cam timing by 30°. Newer engines use a more sophisticated system which can vary intake timing incrementally up to 48°. The Lincoln version was made in the United States.

The supercharged version of the AJ26 is used in the high-performance R versions of Jaguar's cars. The engine was updated with AJ27 specifications for 2000. It produces 370 hp (276 kW) and 387 ft·lbf (525 N·m) with the help of an Eaton supercharger (modified roots-blower). The supercharged engine did not use variable cam timing as the normal benefits of improved volumetric efficiency are not noticeable on a boosted engine

Vehicles using the supercharged version include:

The 3.9L (3934 cc) AJ30/AJ35 variant is a unique displacement used only by Ford and Lincoln and is built in Ford's Lima, OH engine plant. Bore is 86 mm and stroke is 85 mm. The AJ35 version introduced for the 2003 model year added variable valve timing of the intake camshafts and electronic throttle control. While the block, crankshaft, pistons, and connecting rods are all unique to this displacement, many other parts are shared with the AJ-V8 engines produced in the UK by Jaguar.

The AJ133 is a completely new design introduced in 2009. It shares only the cylinder head bolts and exhaust tappets with the previous engines. It is so far available in only one displacement - 5.0 litres, and incorporates spray-guided direct injection and variable camshaft timing. The supercharged variant uses a sixth-generation, twin vortex system (TVS) supercharger for improved efficiency.

A de-bored supercharged version of the Land Rover 4.4 is that company's high-performance engine. It displaces 4.2 L (4197 cc/256 in³). Applications:

Aston Martin hand-assembles a special version of the AJ-V8 for the V8 Vantage. This unit displaces 4.3 L (4280 cc/261 in³) and produces 380 hp (283 kW) at 7000 rpm and 302 ft·lbf (409 N·m) at 5000 rpm. This engine is unique to Aston Martin and features race-style dry-sump lubrication, which enables it to be mounted low to lower the centre of gravity. The engine is assembled by hand at the AM facility in Cologne, Germany, which also builds the V12 for the DB9 and Vanquish. The cylinder block, cylinder heads, crankshaft, connecting rods, pistons, camshafts, inlet and exhaust manifolds, lubrication system and engine management are all unique to the Aston Martin version.

In May 2008, Aston Martin released a new design that used pressed cylinder liners instead of cast-in liners. This allowed for thinner liners, and a higher capacity of 4.7L for the V8 Vantage. Power output increased to 420bhp (an 11% increase on the previous 4.3L unit) and peak torque to 470Nm (a 15% increase). 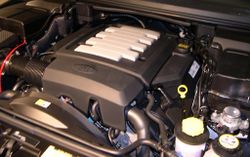