The Ford car was thoroughly updated in 1941, in preparation for a decade of unpredictability surrounding World War II. The 1941 design would continue in an aborted 1942 model year and would be restarted in 1946 and produced until the more modern 1949 Fords were ready.

The "ignition key" for these cars was actually used to operate a bolt lock which, on one end, unlocked the steering column (a feature destined to return, mandated, decades later), and on the other end unblocked the ignition switch, allowing it to be operated. Starting the car was then accomplished by pressing a pushbutton on the dashboard, another feature destined to return with the advent of "smart keys." 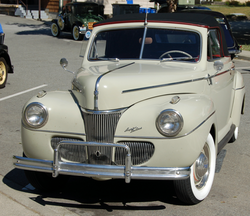 Fords for 1941 were much more modern with a wide body that nearly covered the running boards. The front and rear fenders were still pronounced, but were now integrated more into the body and the headlights were pushed all the way up and out over the front wheels. The 1941 grille was a three-part affair with a tall center section bookended by twin kidneys low on the fenders and vertical bars all around. The 1941 was a bigger car with a 194.3 in (4935 mm) overall length. Body styles included Tudor and Fordor sedans, a sedan coupe, a business coupe and convertible coupe, sedan delivery wagon, and woody station wagon. The pickup truck continued with the 1940 standard Ford styling. 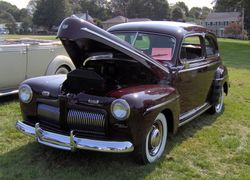 Ford halted its car and truck lines on February 10, 1942 to begin war production, but not before a short run of 1942 cars was built. Changes were made to the car besides a three-part "electric shaver" grille — the frame was lowered and softer springs were used to improve the ride. War rationing required auto makers to black out their chrome trim, and a Special Fordor model was produced with no chrome at all for military use. The pickup received new styling as well, with heavy vertical bars, and truck production lasted through March 3.

Civilian production resumed in July 1945, with an early start to the 1946 model year filling the public's thirst for new cars. The 1946 Ford was identical to the 1942 model under the skin, though a heavy new grille with horizontal bars and red accents modernized the car somewhat. One notable change was to use the 239 CID engine which since 1939 had been used in Mercury and Trucks,and capable of 100 hp (75 kW)for the first time. With steel in short supply, Ford produced a distinctive "Sportsman" convertible with wood side panels. In the movie Back to the Future, 1955 Biff's black car was a 1946 Ford convertible.

The 1947 Ford line was similar to the short 1946. Visual differences included the removal of the red accents from the grill and the two small lights located just above it. Ford began titling 1947s in February 1947. For the first few weeks, the 1947 model was identical to the 1946. Ford then restyled the body slightly first by moving the parking lights from above the grill to below each headlight. Exterior moldings were changed from grooved to a smooth design. A new hood ornament with a blue plastic insert was installed. New hubcap design became available in March. Interior dash color was changed from red accent to gold. By September the roof mounted antenna was moved to the cowl. Horns were moved to in front of the radiator from the engine compartment. The final 1947 models were titled in November. 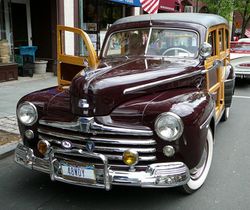 1948 was the final year for the old-style Ford, with an all-new model launched partway through the year. The wood-sided Sportsman convertible would end this year with just 28 built, and the all-wood bodies on the woody station wagons would be replaced with steel for the 1949 season. The old car-based trucks were replaced by the F-Series this year.