From Ford Wiki
Jump to navigation Jump to search
For the English cricketer, see Alan Mullally.

Alan Roger Mulally (born August 4, 1945) is an American engineer and businessman. He is currently the President and Chief Executive Officer of Ford Motor Company.

Mulally was previously executive vice president of Boeing and the CEO of Boeing Commercial Airplanes (BCA). Mulally began his career with Boeing as an engineer in 1969. Mulally was largely credited with BCA's resurgence against Airbus in the mid-2000s.

Mulally was born in Oakland, California. He graduated from the University of Kansas in 1969 with Bachelor of Science and Master of Science degrees in aeronautical and astronautical engineering. He is an alumnus of the Kappa Sigma Fraternity and is its 2007 Man of the Year.[2] He received a Master's degree in Management (S.M.) as a Sloan Fellow from the Massachusetts Institute of Technology (MIT) Sloan School of Management in 1982.[3] He has three sons and two daughters and is married to the former Jane "Nicki" Connell.[4]

Mulally was hired by Boeing immediately out of college in 1969 as an engineer. He held a number of engineering and program management positions, making contributions to the Boeing 727, 737, 747, 757, and 767 projects.

He led the cockpit design team on the 757/767 project. Its revolutionary design featured the first all-digital flight deck in a commercial aircraft, the first two man crew for long range aircraft, and a common type rating for pilots on two different aircraft. He worked on the 777 program first as director of engineering and, from September 1992, as vice-president and general manager. Later he was the Vice President of Engineering for the commercial airplane group. He is known and recognized for elevating Phil Condit's "Working Together"-philosophy through and beyond the 777-program. In 1994, Mulally was promoted to senior vice president of Airplane Development and was in charge of all airplane development activities, flight test operations, certification, and government technical liaison. In 1997, Mulally became the president of the Information, Space & Defense Systems and senior vice president. He held this position until 1998 when he was made president of Boeing Commercial Airplanes, Chief Executive Officer duties were added in 2001.[3]

Following the forced resignations of Phil Condit in 2003 and Harry Stonecipher in 2005, Mulally was considered one of the leading internal candidates for the CEO position.[5] When Mulally was passed over in both instances, questions were raised about whether he would remain with the company.[6]

For Mulally's performance at Boeing, Aviation Week & Space Technology named him as person of the year for 2006.[7] 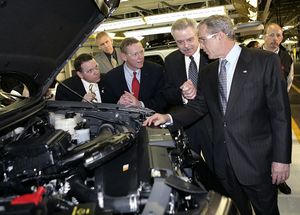 Mulally was named the President and CEO of Ford Motor Company on September 5, 2006, succeeding William Clay Ford, Jr., who remained as Executive Chairman of the company's Board of Directors.[8] Mulally drew flak over calling his Lexus LS the 'finest car in the world,' just as Ford was about to announce his selection as CEO.[9][10]

One of Mulally's first decisions at Ford was to bring back the Taurus car name. He said that he could not understand why the company previously scrapped the Taurus, which had been a best seller.[11] Mulally took over "The Way Forward" restructuring plan at Ford to turn-around its massive losses and declining market share.[12] Mulally revived the Ford Taurus and his cost cutting led to the company's first profitable quarter in two years.[13] Dividends to shareholders were also suspended.[14] He presided over the sale of Jaguar and Land Rover to Tata, an Indian car manufacturer. Later, he said he had "no regrets" over the sale, preferring to concentrate on Ford.[15]

In 2008 amid mounting losses during an economic downturn, Ford announced a proposal on December 2, 2008 to cut Mulally's salary to $1 per year if government loans were received and used by Ford.[16] During hearings for government loans to Ford, he and other industry leaders were criticized for flying to Washington, D.C. in corporate jets. During a subsequent meeting, he traveled from Detroit to Washington by hybrid car, while selling all but one of Ford's corporate jets.[17]

Mulally was credited with stabilizing Ford's financial position, so it currently does not face the threat of bankruptcy unlike General Motors and Chrysler.[18]