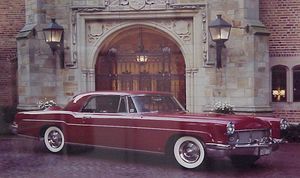 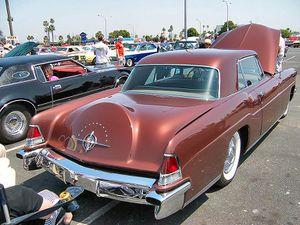 Its inspiration was the original V12 Lincoln Continental of the 1940s, which had been possibly the most notable car of that decade. Ford, often regarded as producers of many competent cars but few exciting ones, felt that they needed a bit of that old glamour back.

Also in the mix was the other Continental, Bentley's, to which the car bore a reasonable resemblance, both in looks (bar the front end) and in style.

The new Continental was intended to be not the largest nor the most powerful automobile, but rather the most luxurious and elegant American car available. Aside from its '40s Continental inspiration, it was designed to recapture the spirit of the great classics of the prewar period—with prices to match.

What emerged was something quite unlike other American cars of the period. While other makes experimented with flamboyant styling, chrome everywhere, and all the glitz and glamour they could manage, the Continental Mark II was almost European in its simplicity of line and its understated grace. There was something of the style of the early Ford Thunderbird at the front, with a tasteful egg-crate grille and a long, curving hood with straight fenders to the headlights. The straight fender line went back to behind the doors, at which point the line kicked up a little before curving back down to the taillights. In fact, it could be said that the Continental looked like the Thunderbird except larger and more elegant. Little chrome was used compared to other vehicles of the time, and the only two-tone paint combinations were limited to roofs that were a color different from the body's. The car had power steering, power brakes, power windows, power seats, and power vent windows. The vanes on the wheel covers were individually bolted inside the frame of the cover. Those unique wheel covers command a price of $400-500 each in resale markets today. It sported a high greenhouse (the portion of the car from the window sill to the top of the roof) and a wraparound windscreen. Gas entered the fuel tank via a swingaway left tailight. Other cars that had this arrangement included some Cadillacs and the 1956 Chevrolet.

Ford was known, since the Model T, as a maker of lower-end cars and trucks and had difficulty with its image in middle and upper markets. The Continental Mark II was designed to change that perception once and for all, and the target was GM and their established brands of Pontiac, Oldsmobile, Buick and, in particular, Cadillac. Ford won the battle with the Mark II, but lost the war when they pulled the plug on the Mark II in May 1957.

Emulating the original Continental, the Mark II had a spare tire hump in the trunk lid. For authenticity, the spare tire was actually mounted beneath it—unlike later Lincolns, in which this was just a styling feature. Loading groceries behind that spare was difficult, although Frank Sinatra likely did not do much shopping at the Piggly Wiggly.

Technically, the Continental was never a Lincoln. A new division, the Continental Division, was formed to make it—and officially, the car should only be called a Continental Mark II—but many ignored that. The car was sold through Lincoln dealerships and was maintained through them. It bore the four-pointed star prominently on its hood and (very large) on the trunk's "spare tire" that soon became the Lincoln emblem. The drive train was pure Lincoln, and the car's forebears and descendants were Lincolns; therefore, they're commonly thought of as Lincolns.

That Lincoln drive train featured the new standard 368 cubic inch Lincoln V8 engine, producing 285 HP in 1956 and 300 HP in the 1957 model year. It was effectively a factory-blueprinted engine, due to the selection of the best, most perfect-to-specifications parts from off the regular Lincoln production line. That engine was allied with a three-speed Lincoln automatic transmission, and both were subject to extensive testing before use.

Most of the car was effectively hand-built to an exacting standard, including the application of multiple coats of paint, hand sanding, double lacquering, and polishing to perfection. Harley F. Copp was the chief engineer for the Continental Division and later became the assistant chief engineer for Ford Division Product Engineering in the late 1950s, reporting to Hans Matthias, the chief engineer. Mr. Copp testified for the plaintiffs in the infamous Pinto gas tank explosion civil suits vs. Ford. The collector car club can be found at www.lcoc.org.

At the car's selling price of $10,000, Ford estimated they lost over a thousand dollars per car. At the time, $10,000 was equivalent to the cost of a new Rolls-Royce or more than two top-of-the-line Cadillacs. Compensated for inflation, this figure would be around $70,000 today. Ultra-high priced cars today are marketed in the $250,000 price range. In 1956, any car marketed at $10,000 was at a very rare price point; it was this high price that doomed the car. Only the very rich could afford one, and scarcely over 3000 cars were built. About 1300 were sold in the last quarter of 1955 after the car's October debut at the Paris Motor Show; another 1300 or so in 1956; and 444 in 1957, some with factory-installed air conditioning. At first, Ford was willing to lose money on each car because of the reflected glory on the rest of their range, but after the company became a public corporation, its tolerance for these losses fell. In hindsight, the recession of the late 1950s would have killed off the car anyway.

Famous owners included Elvis Presley as well as Frank Sinatra, the Shah of Iran, and a cross section of the richest men in America. The car was featured in a few scenes in the 1956 movie High Society, with Frank Sinatra, Louis Armstrong, Bing Crosby, and Grace Kelly.

Today, approximately half of the cars still exist (around 1500) in varying states of repair. There's an active owners' club, the Linclon and Continental Oweners Club [www.lcoc.org] and most parts required to keep them going are available, helped by the car's use of standard Lincoln mechanical components. Prices range between around $8000 for a running example in poor repair to around $70,000 in concours condition; thus, a car in perfect condition costs now (adjusted for inflation) about the same as the new one did in 1955—the only known exception being the aforementioned Mark II owned by Elvis Presley which, in 1999, sold for US$250,000 at a charity auction organized by Elvis Presley Enterprises and held at the Grand Hotel in Las Vegas.

From the vantage point of today, we can say that the Continental Mark II was successful at being what it was intended to be: an American Rolls-Royce or Bentley, and a re-creation of the grand cars of the thirties. Unfortunately, the harsher economics of postwar life meant that there was no profit in building such a thing, and even as powerful a company as Ford couldn't stand to lose money for long.