The Edsel Villager was a station wagon produced by the former Mercury-Edsel-Lincoln (M-E-L) Division of the Ford Motor Company of Dearborn, Michigan, and sold through its Edsel marque from 1958 to 1960. Like the two-door Edsel Roundup and premium Edsel Bermuda station wagons, the Villager was built on a 116 in wheelbase shared with Ford's station wagons, as well as core body stampings. The Villager and the Ranger were the only two model names that existed throughout the Edsel's three-year life span as an automobile marque.

The Villager represented the lower trim level available within the Edsel brand for station wagons, but differed from the two-door Roundup by being offered in six and nine passenger styles. The Villager was available in a four-door configuration only.

All 1958 station wagons shared the Ranger's engine choices, with a 361 in³ V8 as standard. All wagons came with a three-speed manual transmission. Buyers also had the option of a three-speed automatic transmission with a standard column-mounted gear selector, or during the 1958 model year, they could choose Edsel's highly touted but trouble-prone Teletouch automatic, which placed its drive-selection buttons in the steering wheel hub.

To differentiate the wagons offered by Edsel from their Ford counterparts, they were fitted with Edsel's front fascia and grille assembly. The wagons also received unique boomerang-shaped taillights for 1958. The shape of these taillights posed a problem when used as turn indicators – the left-hand taillight appeared as an arrow pointing right and vice versa from a distance. For 1959, the Villager received round dual taillights set in belt-line high chrome pods. In 1960, the Villager used taillights similar to the Ranger of that year.

During its first year in production, Edsel sold more Villagers than Roundup and Bermuda station wagons combined. Despite overall declining Edsel sales in 1959, sales of the 1959 Villager (7,820 units) outpaced the combined three-model ranges of station wagon production in 1958 (6,470 units) by well over 1,000 vehicles.

For 1960, Villager output dropped, directly attributable to Edsel's 43-day production cycle that began in mid-October 1959 and ended in late November 1959. The lowest production number for any Edsel model during its three years was the 1960 nine-passenger Villager station wagon, with just 59 units built. 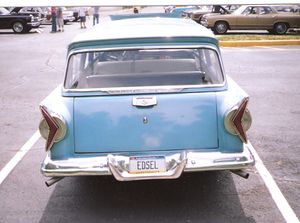