There have been four generations of Mazda automobiles which went by the name of Cosmo, although they are not all particularly related. All were GT cars, with the first proving a successful launch for the Mazda Wankel engine and acting as a halo vehicle for the new Mazda brand. Later Cosmos competed in the ultra-high luxury performance market in Japan with the final JC Cosmo (1990-1995) sold as the Eunos Cosmo - Eunos was a luxury sales channel similar to Toyota's Lexus brand.

The first Mazda to bear the Cosmo name (called the 110S) was one of the first 2-rotor rotary engine powered cars. A prototype was introduced at the 1964 Tokyo Motor Show, and 80 pre-production Cosmos were produced for the Mazda test department (20) and for dealership testing (60) between 1965 and 1966. Full production began in May 1967 and lasted through 1972, though Cosmos were built by hand at a rate of only about one per day. The car was also featured in the show Return of Ultraman.

Cosmos were built in five batches:

In 1968, Mazda went racing with the Cosmo. They selected one of the most grueling tests in Europe to prove the reliability of the rotary engine, the 84-hour Marathon de la Route at the legendary Nürburgring circuit in Germany. Two mostly-stock Cosmos were entered, along with 58 other cars. One major change to the cars' 10A engines was the addition of a novel side- and peripheral-port intake system: A butterfly valve switched from the side to the peripheral port as RPMs increased. The engines were limited to 130 PS to improve durability.

The cars ran together in fourth and fifth place for most of the race, but the all-Japanese car was retired with axle damage in the 82nd hour. The other car, driven by Belgians, completed the race in fourth overall. This was to be the only racing outing for the Cosmo - the next Mazda race car would be a Familia Rotary (R100).

The Series I/L10A Cosmo was powered by a 0810 two-rotor engine with 982 cc of displacement and produced about 110 hp (thus the 110 name). It used a Hitachi 4-barrel carburetor and an odd ignition design - two spark plugs per chamber with dual distributors. A 4-speed manual transmission and 14 in wheels were standard.

Visual changes included a larger grille under the front bumper with two additional vents to each side of this "mouth". Only 1,519 were ever made, and just six were imported into the United States. The price was up a bit to 1.48 million yen (US$4,390).

Talk show host Jay Leno owns a 1970 Series II Cosmo which was featured on the Speed Channel series My Classic Car in March, 2006. It was believed to be the only remaining Series II Cosmo in the United States.

However, Mazda's U.S. division "found another in the garage of Phoenix-area car collector Glenn Roberts and made an offer that he couldn't refuse," according to Car and Driver magazine's September 2007 issue ("A Tale of Two Rotaries").

The second generation CD Cosmo appeared in 1975 and lasted until 1981. It was known as the Cosmo AP in Japan, and sold internationally as the Mazda RX-5, though in some export markets its piston powered counterpart was called the Mazda 121 (a name later applied to Mazda's subcompact model).

Mazda America used the Mazda Cosmo name and offered it from 1976 through 1978. The CD Cosmo/RX-5 series was a flop internationally as Mazda tried too hard to "americanize" the car. It was however an enormous success in Japan where over 55,000 where sold in the first year alone. Due to its poor sales as an export, the series-II version from 79-81 was not exported and remained on domestic sale only.

The Cosmo was Mazda's 'large' compact rotary coupe and based on the Mazda RX-4 floorpan and mechanics, but slightly heavier due to body design and more luxurious appointments, including a 5-link rear suspension and rear disc brakes. It was available with the 12A and 13B engines.

See [1] www.MazdaCosmo.com - For more information on this model.

The third generation HB Cosmo from 1981 shared the Mazda HB chassis with its twin, the Mazda Luce (marketed overseas as the Mazda 929). The HB Cosmo was available as a coupe, hardtop and sedan. Its Mazda Luce counterpart was not available in coupe form. The HB Cosmo/Luce was the only car in automotive history to offer a choice of both Gas and Diesel piston engines and Rotary engines.

Mazda offered three different rotary engines for the HB series. A 12A-SPI, 12A-turbo and 13B-RESI. The latter available with automatic transmission only. The 1982 12A-turbo Cosmo coupe was officially the fastest production car in Japan until being overtaken by the FJ20ET powered R30 Skyline RS.

The HB Cosmo & Luce were sold in Japan only, with the 929 being the export version (which was not available with the rotary engine options). While the sister models (the Luce & 929) were replaced in 1986, the Cosmo variant remained in production at a trickle until 1989. 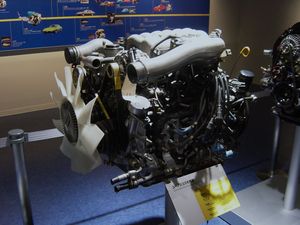 The Eunos Cosmo (loosely based on the 1985 MX-03 concept car) started production in 1990 on the new JC platform. The Eunos Cosmo was the top-line touring flagship of the Eunos luxury channel. It is the only Mazda to use a triple-rotor engine. The car was a 2+2 coupe and was loaded with power amenities. Only an electronically controlled 4-speed automatic transmission was available.

Two engines were available, the twin turbo 13B-REW and the 20B-REW. The triple rotor 20B had 2 Litres(1962 cc) of displacement, making it the largest capacity rotary offered for sale by Mazda. It produced 300 hp (224 kW) and 300 ft·lbf (402 N·m) with twin turbochargers. The JC series Cosmo set several firsts in Automotive history. Its 13B-REW and 20B-REW engines were the first series production twin sequential turbo systems to be offered for sale. The better known FD RX-7 didn't receive its 13B-REW engine until early 1992. Plus was the first production car in the world to get a GPS option & the first in Japan to use the "Palmnet" serial data comms system for ECU-to-ECAT operation.

The Cosmo was speed limited to 180 km/h to suit Japanese regulations, but the 20B-REW version was capable of 255 km/h if given a free run [3]. With over 380 Nm of torque available at just 1800 rpm, the Cosmo could launch from standstill to freeway speeds quickly; however, this came at the expense of heavy fuel consumption. The JC Cosmo was expensive even by today's standards, as Mazda still has not matched the sales price of this car some 18 years later for anything else in its range.

The Cosmo was manufactured from February 1990 until September 1995, and gathered a total of 8,875 sales. A split of 60/40 sales between 13B-REW and 20B-REW variants made the triple rotor 20B-REW version a rare car. Although the Cosmo remained a Japanese market-only vehicle (export had been proposed originally under the Eunos sales channel or the defunct USA-only Amati sales channel. [3] ), the Cosmo has found its way to RHD countries such as Australia, New Zealand, Norway & the UK thanks to limited import regulations for private importers from these countries.