From Ford Wiki
Jump to navigation Jump to search
For a complete overview of all Taurus models, see Ford Taurus.

The Fifth-generation Ford Taurus is an automobile manufactured by the Ford Motor Company from 2008 until 2009. It is the fifth in six generations of the Ford Taurus. However, it is sold under the Taurus name only in the United States and Canada since the Ford Five Hundred was sold in Mexico.

This generation of the Taurus is sold in the Middle East as the Ford Five Hundred.[1]

The Ford Taurus was discontinued in late 2006 due to slumping sales. [2] However, this caused a controversy within the auto industry, with popular automotive websites such as Autoblog [3] and The Truth About Cars [4] expressing their disappointment at Ford for letting the Taurus nameplate decline. MSNBC interviewed many Ford workers who felt that Ford unjustly abandoned the car that had done so much to revitalize Ford and the US industry. In an October 25, 2006 USA Today editorial, "How Ford starved its Taurus" it was noted that the Japanese stick with their winners and make them better (such as the Toyota Corolla, which has been in continuous production since the 1960s),[5] while Detroit automakers retires cars or entire division nameplates in search of "the next big thing".[6]

However, after Alan Mulally became Ford's CEO, rumors were rampant that he was interested in reviving the Taurus. These were fueled by the fact that he said in an interview with the Associated Press that he was baffled to find out that the Taurus had been discontinued when taking position as CEO at Ford, as well as stating that he believed that discontinuing the Taurus was a mistake, and that the Five Hundred should have been named "Taurus" from the beginning.[7] The rumors of a possible Taurus revival were confirmed in mid 2007, when the revamped versions of the Five Hundred and Freestyle were unveiled as "Taurus" and "Taurus X" at the 2007 Chicago Auto Show, a decision that was influenced strongly by Mulally.[7] In a later interview, Mulally explained that the fact that the Taurus was well known and had a positive brand equity associated with it strongly influenced his decision to revive the name.[8] 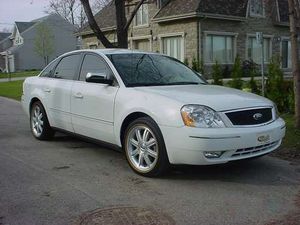 The exterior of the Fifth-generation Taurus is largely carried over from that of the Five Hundred.

The Taurus has a different front fascia that has Ford's signature three bar grille, new headlights, a new front bumper with fog lights, and side fender vents. The Taurus also gains new wheels, each differed on whether the SEL or Limited model was specified. Around the back, the Taurus has Toyota Altezza style clear taillights and an added roof mounted Satellite radio adapter. However, despite these new design features, the Taurus' shape has been criticized for looking too similar to that of the Volkswagen Passat. [9]

As with the exterior, the interior of the Fifth-generation Taurus is largely carried over from the Five Hundred. However, it offers many subtle differences such as using a darker shade of woodgrain, a new steering wheel, among other changes.

The radio is a new design that has chrome trim around the buttons, a new double tiered bin is in the center console, and there is a new shifter that is of a different design. However, the most notable feature of the Fifth-generation's interior - a feature that was new for the Taurus - was Ford's SYNC system, developed by Microsoft. This feature accepts voice commands, and can connect the driver's cell phones and MP3 players to the car, while organizing personal information. [10]

The fifth generation Taurus is now offered in three models; the SE, SEL and Limited. The SE is the base model that costs approximately $24,000 USD, with the middle option SEL costing around $26,000 USD And the top of the line version Limited, which costs $30,000 USD. [10] This generation of Taurus uses the 263 hp 3.5 L Duratec 35 V6 which replaces the 203 hp (151 kW) Duratec 30 3.0 L V6. The Five Hundred/Freestyle's ZF-Batavia CVT, which had maximum torque capacity of 221 lb·ft (300 N·m), is also replaced with a Ford-GM joint venture six-speed automatic capable of withstanding the Duratec 35s additional torque. The Aisin AW six-speed automatic that was used on FWD Five Hundred and Montegos was also replaced by the new six-speed. [11] 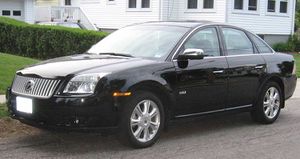 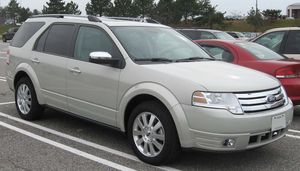