The Ford 335 engine family were a group of small-block V8 engines built by the Ford Motor Company between 1970 and 1982. The significance of the Numerals '335' designated to this series of Small block Ford V8 engines is relatively unknown. Conjecture relating to this designation revolves around a prototype 335 CID (Cubic Inch Displacement) engine Ford developed for the Marine industry; to design a V8 motor eliminating the need for water to pass through the inlet manifold and to delete the need for a separate cam timing cover. The series was nicknamed Cleveland after the Cleveland, Ohio engine plant in which most were manufactured. The 335 was used as an option in mid-sized vehicles and trucks concurrently with the larger 351 member of the Windsor small-block family as well as the mid-sized FE V8 family. Although all three of these engine families continued in production the Cleveland, only outliving the FE by a half-decade, was eventually abandoned in favor of the more compact Windsor design.

The 335 series was very different internally from the similar-looking Windsor series. The 335 Cleveland used smaller 14 mm spark plugs in one of two different cylinder heads, both with 2 valves per cylinder. The 4V heads had massive valves canted to the sides with a "poly-angle" combustion chamber. A novel feature of the engine is that the heads appear to twist, that is that the engine to head surface is not parallel to the valve cover surface — installed the heads are at an angle while the more horizontal valve cover surface has the covers extending mostly vertical. This allows for a narrower engine profile. These covers are secured with 8 bolts, as opposed to 6 on the Windsor.

Inside the block, large main bearing caps are specified for durability, allowing 4-bolt mains on some engines. The oiling system has been widely criticized but has not proven any less reliable than the Windsor line. 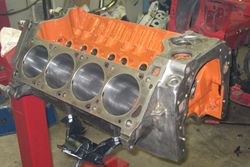 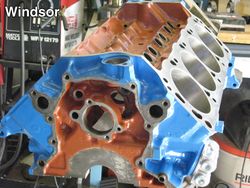 The 351 Cleveland was introduced in 1969 as Ford's new performance car engine and was built through the end of the 1974 model year. It incorporated elements learned on the 385 big-block series and the Boss 302, particularly the poly-angle combustion chambers with canted valves and the thin-wall casting technology.

Both a 4V (4-barrel carburetor) performance version and a 2V (2-barrel carburetor) basic version were built, both with 2 valves per cylinder. The latter had a different cylinder head with smaller valves, smaller ports, and open combustion chambers to suit its intended applications.

All of the 351C and 351M/400 engines differ from the 302/351W by having an integrated timing cover casting in the front of the block to which the radiator hose connects. 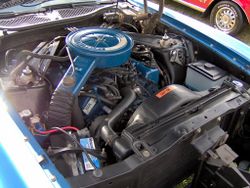 The majority of 351 Cleveland engines are H-code 2V (2-venturi carburetor) versions with low compression. They were produced from 1970 through 1974 and were used on a variety of Ford models, from ponycar to fullsize.

The M-code version was produced from 1970 through 1971. Both years offered quench heads but 1970 offered a slightly higher (advertised) 11.0:1 compression ratio whereas in 1971 the chamber was opened up slightly reducing the advertised compression to 10.7:1. The 1970 4V head is identified with the proper date code casting and a "4" cast on the upper corner of the head. The 1971 4V head is identified with a "4*" (four-dot) casting at the same location. Hydraulic lifters were also specified, with the M-code producing about 300 hp (224 kW). 2-bolt main caps were used along with a cheaper cast iron intake manifold.

The R-code 351 Cleveland for 1972 was considerably different. It had reduced compression for emissions compliance and used open-chamber heads. It had a solid lifter camshaft, however a four barrel carburetor was retained. It produced 275 hp (205 kW) using the new SAE net system.

The Q-code "351 Cobra Jet" version was produced from May 1971 through the 1974 model year. It was a low-compression design that included open-chamber "4V" heads, a special intake manifold, special hi-lift long duration hydraulic camshaft, special valve springs and dampers, a 750 CFM 4300-D Motorcraft Carburetor, dual-point distributor, and 4-bolt main bearing caps. It was rated at 266 hp (198 kW) (SAE net) for 1972 when installed in the Mustang and 248 hp in the Ford Torino and Mercury Montego. The horsepower rating dropped in 1973 to 246 hp for the 4-barrel for the intermediate Fords, and still retained the higher 266 hp rating in the Mustang. The 351 CJ (now referred to simply as the "351 4V") was rated at 255 hp in 1974 and was only installed in the Ford Torino, Mercury Montego and the Mercury Cougar.

Note that there was also a 302 "Windsor"

This engine was built only in Australia, and was intended to give their consumers a five liter alternative to the 351 Cleveland as the Ford "Windsor" series of engines was not commonly available there. Utilizing a locally produced 351 Cleveland block, 302 cu in (5.0 L) was attained by reducing the stroke of the 351C from 3.5 to 3 inches (89 to 76 mm). Additionally, the 302C cylinder heads were designed locally, with smaller combustion chamber to compensate for the reduced stroke of the engine.

This combination of closed combustion chambered quench heads with smaller 2 barrel style ports made a more powerful setup known in the USA as "Australian heads". These heads interchange directly onto 351C engines, and are highly sought outside of Australia as a low-cost method to increase compression ratio. They are a good street alternative to the over ported 4 barrel heads. Using the 302C cylinder heads on an otherwise unmodified 351C will increase the compression ratio beyond a safe level for regular pump fuel. Using the small chamber 302C cylinder heads properly requires engine design changes (deck clearance, piston design, cam shaft specifications) optimized for the intended use.

The big-block FE engine family was getting rather tired and outdated, and the 385 family could not meet the efficiency requirements of the time. At the same time, the small-block Windsor engines were too small and high-revving for Ford's fullsize car and truck applications. So the company went to work on a new small-block to meet the desired levels of economy while still providing the kind of big-block torque that was needed to move 2+ ton vehicles.

The Ford 400 engine was based on the 351 Cleveland but was produced with a half inch taller deck height to allow for a crankshaft with a longer stroke. The 400 also featured larger main-bearing journals and had "square" proportions, with a 4.0 in (102 mm) bore and stroke; it therefore displaced 402 cu in (6.6 L), making it the largest small-block V8 made at that time. It was introduced in model year 1971 with a full half-inch (12.7 mm) longer stroke than the 351 Cleveland, making it the longest-stroke Ford pushrod V8 engine. A long-stroke engine has good low-end torque. This was a good compromise given Ford's requirement for an engine to power heavier mid-size and full-size cars and light trucks. The M-block, as it later became known, was the last pushrod V8 block designed by Ford. The M-block also shares some elements with the Windsor engine family: bore spacing, cylinder head bolt-patterns and crankshaft journal dimensions.[1]

The 400 was seen as a smaller and lighter replacement for the big Ford 385 engines, the 429 and 460, in Ford's big cars. Weighing just 80% of a similar big block, it was originally available in Ford's Custom, Galaxie and LTD lines, and in Mercury's Monterey, Marquis, and Brougham. Later, it would power the Ford Thunderbird, the Lincoln Continental, Mark V, mid-size Fords and Mercurys, and Ford light-duty trucks.

The vast majority of 400 blocks use the same bellhousing bolt pattern as the 385 family big-block to make it compatible with the higher torque-capacity C6 transmission used on the large cars and trucks. There were a small number of 400 block castings that use a "small block" pattern on the rear for mounting an FMX transmission. These castings are rare. The 400 was modified in 1975 to use unleaded gasoline.

When the 351 Cleveland was withdrawn after the end of the 1974 model year, Ford needed another engine in the 351 cubic inch (5.8 L) class, since production of the 351 Windsor was not sufficient and the 390 FE was being retired as well. To replace the 390, Ford took the 400 engine's tall-deck block and de-stroked it, with the shorter throw crankshaft from the 351 Windsor, and taller pistons, to produce a 351 cubic inch (5.8 L) engine whose components were largely compatible with the 400. This engine was called the 351M and as a back-formation the taller-deck block became known as the M-block.

The M designation is commonly referred to “Modified”, and is derived from the use of both "Cleveland" (block, heads) and "Windsor" (crankshaft) components in the same engine. A "Modification" for the parts intended application so to speak.

Another origin of the M designation may have come from where the engine blocks were cast. It follows the naming convention set forth by the 351C (Cleveland) cast at the Cleveland Foundry and 351W (Windsor) where the majority of the blocks were cast at the Windsor Casting Plant. From the introduction in the Model Year 1975, the 351M engine blocks (which are the same as the 400 engine block) were all produced at the Michigan Casting Center (MCC) in Flat Rock, MI or at the Cleveland Foundry (CF) also known as the Cleveland Casting Plant (CCP). To help distinguish it from the other two different 351s, the logical choice was to use the Michigan Casting Center hence the “M” designation.

The 351 Cleveland had a well known, positive reputation in the public. For a couple of years after the introduction of the 351M, Ford marketing called the engine the "351 Cleveland". This led to confusion as to what 351 version was actually in the vehicle.

Later car enthusiasts incorrectly refer to this engine as a "351 Midland" presumably a reference to Midland, Michigan a city just northwest of Saginaw or reference to an iron foundry in Midland, Texas. But the Ford Motor Company never owned a “Midland” factory.

Many car enthusiasts of the day however did not particularly like this motor, due to the taller deck height, extra weight and different bell housing bolt pattern. As such jokes about its use of shared parts (Cleveland and Windsor) began to circulate referring to it as a 351 Clendsor, Weveland, or Clevor.

For the 1977 model year, Ford decided to replace its aging FE big-block 360 and 390 engines in its light truck line with its new 351M and 400 engines. For light truck use, beefed-up blocks were designed. These enhancements were added to all M-block engines starting with the 1978 model year.

1979 was the final year the M-block engines were used in cars. After that, the Ford 351 Windsor at 5.8 L was the only large car engine used. Reduced demand for large engines due to fuel economy regulations led to the abandonment of the Cleveland production line that produced the 351M and 400 engines after 1982.

The M-block engine was designed when first-generation pollution controls were already in place. Most Ford V8s required bulky and unsightly external tubing to feed Thermactor air into the exhaust manifolds and exhaust gas to the EGR valve below the carburetor, but this was all built in to the M-block engine.

This all made adapting the M-block to the second generation of emissions control equipment harder. One requirement of the second-generation equipment was an oxygen(O2) sensor in the exhaust, which had to be placed before the Thermactor air was added. Since Thermactor air was injected right into the block's exhaust ports in the M-block, there was nowhere for the O2 sensor to go.

It would have been possible to alter the M-block to work, but it would have required significant effort and cost. Ford decided to simply scrap the M-block engines and replace them with updated 351 Windsor engines at the small end, and a combination of the 6.9 L Navistar International diesel and the 460 at the top end. 1982 was the last year the M-block was sold.