The Ford AU Falcon is a full-size family car, manufactured by the Ford Motor Company of Australia between September 1998 and September 2002. The AU sported a radically different design that was dubbed "New Edge", to attract the younger generation with its "out there" looks.[1] Other changes included a 35 kg (77 lb) reduction in weight for the base car, 17.5 per cent stiffer bodyshell, and an eight per cent improvement in fuel consumption.[2]

The AU Falcon was developed after considering proposals to replace the Falcon platform with one derived from an overseas model, such as the American Ford Taurus, European Ford Scorpio, or the Japanese Mazda 929. These were eliminated in favour of a substantial redesign of the Australian platform, due to concerns about towing, interior size, and local employment. Design started in 1994 and the program cost 700 million Australian Dollars before product launch. It was launched under the slogan You've come a long way baby.[3]The AU featured Ford's New Edge design style, and an optional IRS, for the first time on a Falcon. The IRS was a double wishbone design on an isolated subframe, standard fitment on the XR6 VCT, XR8 and Fairmont Ghia, and was an option on most other sedan models (although not with limited slip differential - this combination was reserved for IRS XR models).

Sales of the AU did not match those of the previous model, the EL Falcon , partly due to a lack of enthusiasm by customers for the New Edge styling, alteration of fleet sale pricing, and the long term decline in the market for large cars. 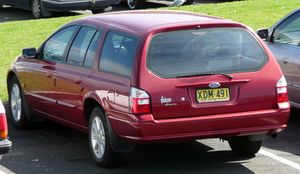 Many of these issues were addressed with the AU Series II (April 2000) and Series III (November 2001) updates, which brought with them minor styling changes that gave the cheaper models styling features from the Fairmont, a laminated firewall to reduce NVH and incremental power upgrades for the V8, among other things.

During this period the Windsor was phased out of production with the last being sent to Australia. These Windsors were then hand assembled by Tickford Engineering and turned into the most powerful EFI Windsor V8 made in the world. It was stroked to 5.6 litres and boasted 250 kW (335 hp) and 500 N·m (369 lb·ft) of torque. The six cylinder engine was not forgotten during this period, with the XR6 version receiving VCT, making 172 kW (231 hp) . The same engine, detuned to 168 kW (225 hp) through the use of a quieter exhaust system, was fitted to the Fairmont Ghia. 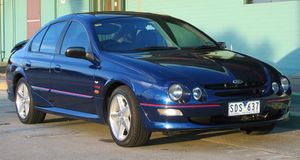 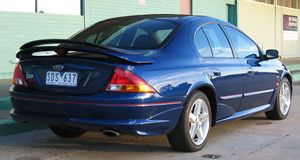 The base model AU Falcon was called the Forte, which was the replacement of the old GLi and was marketed to fleets and families. When new the car was priced at $30,690 AUD.

The more 'up-spec' model was called the Futura, which was also marketed to families. The Futura had a more conservative grille than the Forte. The Futura had more options than the standard Forte, like cruise control, and alloy wheels. The price of the car when new was $34,990.[4]

A limited edition AU Falcon model was made and was called the 'Classic' model and was designed while series I was in production. It was an independent model from the Forte and Futura which features included the AU Falcon Utility Vehicle's grille, 'Classic' badging, alloy wheels, a low level spoiler, and a 'warm charcoal interior. The price when new was $30,690.[5]

The Ford Falcon S, for Sports, was designed as an entry-level sports edition, with added features such as a painted grille, alloy wheels, S decals on the rear quarters, and a high level spoiler. The colour choices were limited to Hot Chilli Red, Liquid Silver, Dynamic White, Galaxy (Metallic Blue) and Silhouette (Black) and the car was a sedan only model.

The Fairmont was the entry level luxury model for the Falcons. The Fairmont had all of the qualities of the Futura but included extra features that included a honeycomb grille, a 80 second headlamp off delay, wood grain inserts, unique 15" wheels, dual horns, Fairmont badging on the boot lid, and an analogue clock. The car came in sedan and station wagon. Above that was the Fairmont Ghia, which was the highest non-performance specification Falcon available. It had even more features that included unique wheels, more wood grain inserts and other features.

The XR Series was the performance end of the range, comprising of the XR6 HP, XR6 VCT and the XR8, which was the 'hero' car of the range, although the aging Windsor V8 struggled to keep up with Holdens new LS1 engine. All had the standard body kit that the XRs always have.

The body of the AU Falcon utility was different in design from the equivalent Holden Commodore ute in that the cab was separate from the cargo tray (the tray was an integral part of the body shell in the Holden) - resultantly this allowed the rear to accept different after market body types, including tray decks, service bodys, and camper van shells. Unlike the sedan, the AU Falcon utility vehicles were very popular. The model options were XL, XLS, XR6 and XR8.

Towards the top end of the market were the T-Series models, the Falcon XR8 based TE50, the Fairmont Ghia based TS50 and the Fairlane based TL50. These were marketed under the FTE name [6], FTE being an acronym for Ford Tickford Experience, a joint venture between Ford Australia and Tickford [7]. The FTE T Series models, which were produced from 1999 to 2002, featured hand-built engines with an engraved plaque bearing the name of the engine builder.