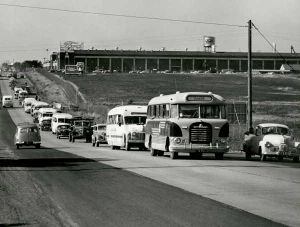 Ford Australia is the Australian subsidiary of Ford Motor Company and was founded in Geelong, Victoria in 1925 as an outpost of Ford Motor Company of Canada, Limited. At that time, Ford Canada was a separate company from Ford USA. Henry Ford had granted the manufacturing rights to Ford in British Empire (later Commonwealth) countries (excepting the UK) to Canadian investors.

Its first products were Model Ts assembled from Complete Knock Down (CKD) kits provided by Ford of Canada. Nevertheless, it is best known in more recent times for producing the Falcon, originally a U.S. model introduced in Australia in 1960, but adapted to Australian requirements and road conditions. Since the release of the XA model in 1972, Falcons have been fully Australian designed. It also produces a four wheel drive model called the Territory.

Ford Australia is the only Australian car manufacturer which designs and manufactures its own unique high-volume engines.[1] 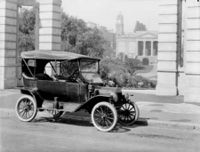 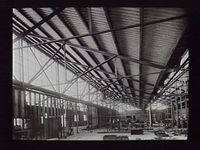 The Ford Australia plant under construction in Geelong, 1926.

On March 31, 1925 Ford announced that Geelong, Victoria was to be the Australian headquarters. The first Australian built Ford was a Model T that came off an improvised production line in a disused Geelong woolstore in June 1925, while work started on a factory in the nearby suburb of Norlane. In 1928 the factory switched to the Model A and was followed by the Ford V8 in 1932.[2]

In 1934 the company invented the ute. The inventor of the ute was Ford engineer Lewis Bandt.[2] During the Depression, banks would not extend credit to farmers to purchase passenger cars- in the belief they were unnecessary luxuries. However, they would lend money for the purchase of "working" vehicles. The ute fulfilled the need of farmers to have a workhorse which could also be used "to take the wife to church on Sunday and to the market on Monday".

In 1956 the company bought a large tract of land in the northern Melbourne suburb of Broadmeadows, and in July 1961 announced that the new Melbourne factory would become the company headquarters.[2]

Ford has two main factories, both in Victoria: located in the Geelong suburb of Norlane and the northern Melbourne suburb of Broadmeadows. The Ford Discovery Centre, a museum of the history of the Ford Motor Company in Australia is also located in Geelong.

Ford has also designated as one of five (worldwide) full service Regional Product Development Centre, specifically for the Asia Pacific and African regions. Products launched so far include the Ford Ikon and Fiesta in India and the Ford Bantum ute and Ikon (a re-badged Fiesta) in South Africa. Future projects include a global light truck program.[3]

The Laser was produced in Ford's plant at Homebush in Sydney, from 1981 until September 1994 when the plant closed, after which they were fully imported from Japan. The Laser was replaced by the European Ford Focus in 2002. It is currently offered in sedan and hatchback variants with a 2.0L engine, which is one of the market leaders in sales. The Fiesta, heavily promoted as a product of German engineering, has been also a decent seller. The 2010 Ford Focus will be built at the company's Broadmeadows plant [1].

Mid-size cars assembled in Australia included the Ford Anglia, Escort and Cortina from the UK. These were adapted for the Australian market: for example, from 1972, the Cortina was available with the option of either a 3.3 litre or 4.1 litre 6 cylinder engine. In 1977, lack of capacity meant that the Cortina wagon was in fact assembled in Renault's (now long since closed) Australian factory.

The Cortina's replacement, the Mazda-based Telstar, was initially assembled in Australia. In 1989 the Telstar sedan was replaced by the locally assembled Nissan-based Ford Corsair. When Nissan shut down its Australian manufacturing operations in 1992 the imported Telstar resumed its former position. In 1995 the Telstar was dropped in favour of the Mondeo, imported from Belgium.

Ford Australia dropped the Mondeo in 2001, arguing at the time that the segment of the market in which it competed was in decline, but 2007, it announced that it would introduce the new Mk IV model in Australia.[2]

The North American Ford Falcon was assembled in Australia in 1960. The Australian and American product lines separated during the mid 1960s when the US Ford product proved inconsistent with Australian desires and requirements; In fact the initial Falcon required extensive re-engineering beyond standard RHD adaptation for Australian conditions. Since its initial offerings the Falcon has proven to be Ford Australia's most popular car.

Ford has manufactured over three million units since 1960, and has topped the sales charts on many occasions. Currently the Falcon lineup is offered in sedan, station wagon, and utility body styles, however in the past panel vans and hardtops were offered. Falcons have dominated the ranks of taxis in Australia and New Zealand, along with sister car, the Ford Fairlane, and have been widely used as police cars, especially in performance variants.

Since 2004, the Ford Territory has been built on the same production line as the Falcon. The Territory has regularly been the most popular SUV in Australia since its release.[4]