The Barra engines are a family of straight 6s and V8s assembled by Ford Australia since 2002. The V8s are built in the USA by the Ford Motor Company and are shipped un-assembled to Australia, for assembly at the FPV Factory. Production of the straight 6 is scheduled to continue until at least 2013, when an all new Falcon is rumoured.

This engine was first launched in 2002 with the BA Falcon and was a development of the previous Intech E-Gas engine. The E-Gas engine is designed specifically to run on Autogas only. It features a Vialle closed-loop single-point LPG injector-less carburetion system in lieu of the standard sequential petrol injection system. The engine was carried over to the current BF Falcon.

These were found in the BA Falcon and the SX Territory and were produced between 2002 to 2005.

This engine was produced for the BA Falcon XR6T between 2002 to 2005. It is similar to the Barra 182, except it has a slightly lower compression ratio, a single Garrett GT40 turbocharger and an intercooler.

This is the current engine found in the BF Falcon and SY Territory and has been in production since 2005. It is similar to the Barra 182 except the exhaust and intake valve timing act independently in the VCT system. However, the slight increase in power is also due to an increase in compression ratio.

These are found in the BF Falcon XR6T and the Turbo Territory and have been in production since 2005. It is the same as the Barra 190 except it has a slightly lower compression ratio, a single Garrett GT40 turbocharger and an intercooler. 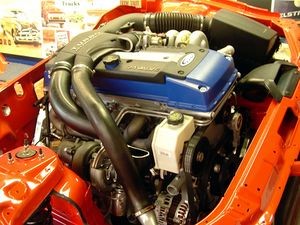 This is the most powerful I6 ever produced by Ford. Production commenced in 2004 and it is found in the BA/BF Falcon based FPV F6 Typhoon and Tornado models. The increase in power is achieved through the use of a Garrett GT3540 turbocharger.

The Barra 195 is the latest version of the naturally aspirated engine and is found in the current Ford FG Falcon sedan and ute (the BF III wagon uses the old Barra 190). The extra power and improved fuel economy are due to a revised inlet manifold and a new cylinder head. Although the engine specifications state that this unit produces 391 N·m (288 lb·ft) of torque on 91 RON petrol, when fuelled by 98 RON, it can produce 420 N·m (310 lb·ft); more than the identically sized V8 in the BMW M3.

The figures for the revised turbo engine for the FG XR6 Turbo mimics the old FPV turbo I6, however this is an incorrect assumption. The engine employs a new turbocharger and intercooler in conjunction with the Barra 195s updates. The result is that the FG XR6 Turbo is actually faster than both FPV's BF Typhoon and the FG XR8, despite having less power than either.

The high power variant of the FG's turbo I6 is found in the new FPV F6, the fastest mass produced car in Australia. Featuring a larger turbocharger and intercooler, this engine is now the most powerful 6 cylinder engine manufactured in Australia and produces more torque than any Australian engine, including the V8s. It is also the first Australian engine to produce more than 100 hp (75 kW) per litre. As a result, the F6's rolling acceleration from 80 km/h (50 mph) to 120 km/h (75 mph) is 2.8 seconds; quicker than a Porsche 911 Turbo, despite hauling more weight with less torque and less power.

The Barra V8s are based on the Modular engine, however they are assembled in Australia. All are of the 5.4 litre (330ci) variant with SOHC driving 3 valves per cylinder and feature VCT. The Falcon was the first vehicle in the Ford world to have the VCT Modular engine. There are higher performance V8s called the Boss 260 & 290, and from November 2007, Boss 302 with DOHC and 4 valves per cylinder. They are named in this way due to the kilowatt output of the engines.
Common specifications to V8s
Bore: 90.2 mm
Stroke: 105.8 mm
Displacement: 5408 cc
Number of valves: 24

This was an optional engine on the BA Falcon and produced between 2002 to 2005.

Note: Barra 220 is the BA V8 5.4L upgrade for the Falcon models below the XR series.

Is an option on the BF Falcon. The extra power comes from a slight increase in compression ratio. This is done safely with the addition of another knock sensor. In production since 2005.

Note: Barra 230 is the BF V8 5.4L upgrade for the Falcon models below the XR series.

This engine was found in the BA and BF XR8. Although it produced more power and torque than the Barra 240T, the V8's peaky tuning meant it was actually slower.

Featured in the BA FPV GT, this hand built engine produced more power than the 260. This engine was later slotted unchanged into the FG XR8.