This article is about the multipurpose entertainment facility. For the rehabilitation center, please see Betty Ford Center.

Ford Center is owned by the City of Oklahoma City and opened on June 8, 2002, three years after construction began. It is located adjacent to the Robinson Avenue exit of the I-40 Crosstown Expressway in downtown Oklahoma City. The 'Ford Center' name comes from a naming rights deal with the Oklahoma Ford Association and Dealerships.

The facility is the premier component of the city's 1993 Capital Improvement Program, known as Metropolitan Area Projects (MAPS), which financed new and upgraded sports, entertainment, cultural and convention facilities primarily in the downtown section with a temporary 1-cent sales tax assessed. Despite the "metropolitan" moniker of the improvement program, the tax was only assessed inside city limits.

Oklahoma City officials had long planned to upgrade the facility in order to remain competitive for NCAA events, concerts, and conventions (see MAPS-III)[clarification needed]. Many critics[who?] had felt that Ford Center was a large facility but did not have many of the luxuries of other arenas.

Originally billed and marketed as a "state-of-the-art" facility, Ford Center was constructed to minimum NBA and NHL specifications. The arena was built without the luxury amenities because of local concerns on expenditures on an arena without a major-league tenant. The city had thought that it could shell-in updated NBA or NHL amenities and improvements to Ford Center once a team announced it would relocate to the city.

Recognizing that a local investor group had purchased a team as well as the "new NBA model", city leaders revised their plans for upgrading the facility and desired to upgrade Ford Center immediately to remove any doubt about its competitive amenities and potential profitability should a team relocate. Originally city officials had hoped to include Ford Center improvements as part of a planned 2009 MAPS-III initiative.

Ford Center is located immediately across the street from the Cox Convention Center, a marketing point often used by city officials (since Cox Center itself has a 15,000-seat arena).

On March 7, 2008, the citizens of Oklahoma City passed a $121.6 million initiative designed to renovate and expand the Ford Center and to build a practice facility for the relocated Seattle Supersonics team which is now known as the Oklahoma City Thunder. Financing consists of a temporary 15-month, 1-cent sales tax that will be paid by Oklahoma City residents and shoppers beginning January 1, 2009.

The city held the temporary tax initiative in March 2008 to facilitate the relocation of the NBA's Seattle SuperSonics or another relocation franchise. It is expected that the refurbishment will turn the Ford Center into a top-tier NBA facility.

Naming rights for the 'new' facility are currently under discussion per terms of the lease agreement between the Professional Basketball Club LLC and the City of Oklahoma City, however preference is being given to the Oklahoma Ford Association, who is the current sponsor. 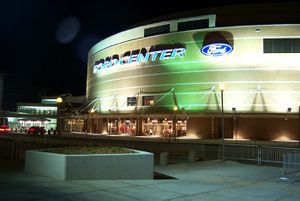 The Ford Center at night.

The primary tenant of the Ford Center is the Oklahoma City Thunder of the National Basketball Association (see NBA information below). Ford Center also hosts Oklahoma City Blazers of the Central Hockey League and the Oklahoma City Yard Dawgz of af2 on a part-time basis. During scheduling conflicts, the Blazers or Yard Dawgs will move their home games to the Cox Convention Center's arena, across the street. The Ford Center has hosted many WWE events such as RAW, SmackDown!, and Unforgiven 2005. A record-setting Raw was held in the arena on June 30, 2008 with 11,560 fans on hand. This was the most WWE tickets sold in Oklahoma in WWE history,Also RAW had came to The Ford Center on September 25,2006.

Ford Center hosts a number of games and events from Oklahoma City University, the University of Oklahoma, and Oklahoma State University along with those from local highschools and post-secondary organizations. Ford Center is also used for other events, including major concert tours, conventions, National Hockey League preseason and exhibition games, and notably professional wrestling shows such as Unforgiven 2005, RAW and Smackdown!.

Ford Center will host the 2009 Big 12 Conference Men's Basketball Tournament. In early July, UFC president Dana White announced that they are working on bringing an event to the Ford Center within the next 6-8 months.[2] It would be the first UFC event held in the state of Oklahoma since UFC 4, which was at the Expo Square Pavillion in Tulsa on December 16, 1994.

After the city of New Orleans, Louisiana and surrounding area was devastated by Hurricane Katrina in 2005, the NBA reached a deal with the City of Oklahoma City which allowed the New Orleans Hornets franchise to temporarily move to the Ford Center. The New Orleans Hornets leased the facility for the 2005-06 season and exercised the option with the city to extend for the 2006-07 season. Ford Center received a $200,000 renovation (primarily to lighting and sound) as part of the Hornets' lease. The Hornets played their last game at Ford Center on October 9, 2007, a preseason game.

The hosting of the Hornets arguably gave Oklahoma City the edge it needed to land on the radar of professional sports. Long being considered by many as too small to host a major-league team for a variety of reasons, support for the Hornets during their two-year stay caught the attention of the NBA and other sports leagues. Attendance for Hornets games at the Ford Center averaged 18,716 fans in 2005-06 (36 games) and 17,951 fans (35 games) in 2006-2007. David Stern was quoted as stating that "Oklahoma City was at the top of the relocation list of cities" and during the Hornets' last home game he all but assured local fans that the NBA "had not played its last game in Oklahoma City." 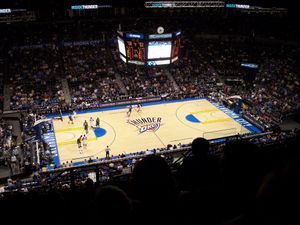 Oklahoma City hosted Minnesota and later on beat them for their first win.

Oklahoma City billionaire investor Clay Bennett of the Professional Basketball Club LLC purchased the Seattle SuperSonics and Seattle Storm franchises from Howard Schultz in 2006. The deal included a provision that gave Seattle officials one year to solve its arena situation or allow Bennett to seek relocation.

After an April 2008 league approval, it was announced on July 2, 2008 that the Sonics franchise would be relocating to Oklahoma City and would play at Ford Center. The agreement retires the "SuperSonics" moniker, color, and logos--possibly to be used by a future NBA team in Seattle. On September 2, 2008, the team announced they would be called the Oklahoma City Thunder. The Storm remained in Seattle and was sold by Bennett to local Seattle investors.