The original Ford Cologne V6, also known as the Ford Taunus V6, 640L, was a 60° cast iron block V6 engine built by the Ford Motor Company in Cologne, Germany, hence the name. It was closely related to the Ford Taunus V4 engine, adding two cylinders and no longer requiring a balance shaft.

Over the years, the Cologne V6 has evolved from the engine displacements of 1.8, 2.0, 2.3, 2.4, 2.6, 2.8, 2.9 and 4.0 litres engines. All except the Cosworth 24v derivative and later 4.0 litre SOHC engines were pushrod overhead valve engines, with a single camshaft between the banks. The Cologne V6 is still in production. It is still a viable engine and does not closely resemble the original engines it evolved from.

There is talk that it is scheduled to be replaced, however Ford has made no formal announcement and recent news suggests it will remain in use in the Mustang as a base model engine into 2010. The new version of the Ford 4.0 L engine is listed as having 210 hp with 240 ft·lbf (330 N·m) torque. Dyno tests by owners, and manufacturers of aftermarket products, have shown this engine to be underrated in reported hp.

Originally, the Cologne V6 was installed in cars intended for Germany and continental Europe, while the British "Essex" V6 was used in cars for the British market. Later, the Cologne V6 largely replaced the Essex V6 even for British-market vehicles. These engines were also used in the United States, especially in compact trucks.

The older fuel injected Cologne engine is lighter and more powerful than the equivalent Essex V6 even though its maximum engine displacement is smaller, but it produces less torque (Cologne V6 162 lb·ft (220 N·m) versus Essex V6 174 ft·lbf).

The Cologne V6 was made to be very compatible in installation with the Taunus V4, having the same transmission bolt pattern, the same engine mounts, and in many versions, a cylinder head featuring "siamesed" exhaust passages, which reduced the three exhaust outlets down to two on each side. The latter feature was great for compatibility, but poor for performance. The 2.4, 2.9 and 4.0 had three exhaust ports as in the photos, making them preferable.

The engine was available in both carburetted and fuel injected form.

The second generation Cologne V6 was introduced in 1974. It displaced 2.8 L (93.03 mm Bore, 68.5 mm Stroke, Template:Convert/LoffAonDorSoff) and used a geared camshaft design. The European version used a "siamesed" two-port exhaust manifold, identical to the one used on the I4, while the American version used three-port heads. The European approach was useful in that existing cars with the I4 engine could be upgraded with relative ease. Output was rated at 90 to 115 bhp (86 kW) for the US market and anywhere from 130 to 160 bhp (119 kW) for the European market, depending on the model.

In Europe the 2.8 was produced with carburetor (132 bhp), mechanical fuel injection (Bosch K-Jetronic, 160 bhp), and electronic injection (Ford EEC-IV, 150 bhp). Electronic injection only featured on the 2.8 Granada models for one year before being replaced with the 2.9 unit.

Tuning options are very limited with the Bosch K-Jetronic models. The siamesed inlet and exhaust ports of the 2.8 only respond well to forced induction or an overbore; normal tuning will yield only minor power results. The MFI 2.8 Cologne ( Capri / Sierra 2.8i ) uses a very restricted induction setup, and there is no open air kit available due to this.

TVR Tasmin/280i used the Cologne 2.8 with Bosch K-Jetronic fuel injection, as did the early TVR 'S' series in 2.8 and revised 2.9 efi injection form. 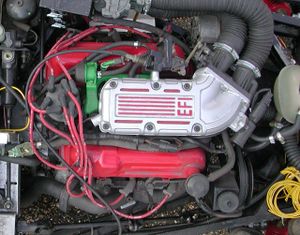 Above view of a 2.9 litre; front is to the right. Note the pronounced stagger of the cylinder banks. This is a fuel injected engine. The plenum chamber is silver, and the fuel rail is painted green. 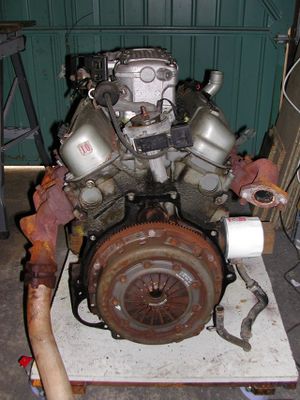 View of a 2.9 litre from the rear, flywheel side; note the 60° between the cylinder banks. 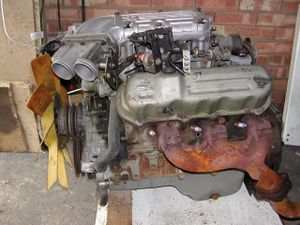 Left side of a 2.9 litre. Unlike the 2.8, the 2.9 does not merge the three exhaust ports into two manifold pipes.

In Europe, this engine was commonly fitted with the Bosch L-Jetronic fuel injection system, married to Ford's EEC-IV engine management. Because of this difference over the 2.8 L model, this version was a more popular candidate for after market modification (typically turbocharging) from such well known companies as Janspeed and Turbo Technics.

The North American version of this engine suffered from several serious reliability issues over its lifespan.

Cylinder head cracking was very common in early models, but affected all model years. Compared to the relatively stout European heads, the North American 2.9 had apparently been subject to a reduction of material around the valve stem guides and rocker shaft mounting pedestals. Some engines would suffer from this failure after overheating only once, while some would fail without overheating at all.

The cylinder heads underwent a redesign for the 1989 model year, receiving additional material in some problem areas. This helped to reduce the chances of this specific failure, but it was still an issue. Some of these head castings are supposedly printed with the "89TM" designation, but there has been no verification of these claims as the "86TM" designation is usually found on the 1989 and newer heads as well. The redesigned heads also have larger diameter bosses for accessory mounting than the 1st design heads.

After-market heads are also available from World Products, with better design improvements to the early OEM design. These heads use the early model narrow bosses for accessory mounting, so fitment of 1989 and newer accessory brackets will require modification.

Additionally, oiling problems were common, and added to the poor reputation of the North American 2.9. Although these problems mainly affected poorly maintained or high mileage engines, it occasionally affected low-mileage engines with proper maintenance as well. The symptom of these problems is serious valve train noise. This is due to a number of design faults. Valve train oil pressure was entirely dependent upon a supply fed through the two center cam bearings. Even slight bearing wear could cause complete loss of oil pressure to the hydraulic valve lifters, rocker shaft, and rockers. Excessive internal "bleeding" through the half-moon camshaft thrust plate also contributed to this, though this can possibly be remedied by reinstalling the thrust plate in an upside-down position.

In the event that a cylinder head crack occurs, coolant can often enter the crankcase, contaminating the oil. This quickly leads to cam bearing damage, triggering valve train oil pressure loss. As a result, these two design faults have led to catastrophic engine failure in many North American 2.9s.

Regardless of these problems, many of these engines are still on the road in the US, and when maintained properly, can be highly reliable powerplants. Regular oil changes and stringent cooling system maintenance is essential if owners of early-model 2.9s wish to avoid trouble.

A special DOHC version of the 2.9 was created by Cosworth Engineering in 1991 ( Code BOA ). Although it shared the same block as the standard 2.9 (with a few machining operations left out to improve strength), power output was up to 195 PS (143 kW) and torque was boosted to 203 ft·lbf (275 N·m) at 4500 rpm. This engine was used in the Ford Scorpio Cosworth 24V. It was always mated to an improved A4LD ( A4LDe ( small e)) automatic gearbox. No manual versions were available.

The engine used an almost 3-metre (9.8 ft) long duplex chain to drive the camshafts, tensioned by a hydraulic tensioner. The oil pump was driven by a shaft located where the camshaft previously was. The ignition was replaced by a distributorless EDIS-6 system which had no moving parts at all.

The engine was known for its substantial increase in power delivery above 4000 rpm relative to the unmodified version; in recent years the engine has become a popular choice as a replacement engine for Ford Sierras.

An improved version of this engine ( code BOB ) was available in the restyled 1995 Ford Scorpio. Differences included two simplex chains with two hydraulic tensioners and the addition of a variable length intake system called VIS. Power output was increased to 210 bhp (157 kW). This was mated to a fully electronically controlled A4LDE (big E) Autobox. 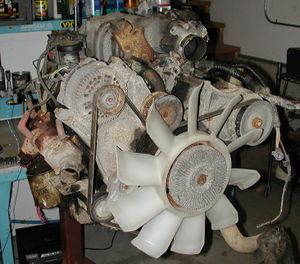 This evolutionary redesign of the American 2.9 solved many of the reliability issues that plagued its predecessor. A beefier cylinder head design eliminated the 2.9's common failure of cracked heads. Hydraulic roller lifters replaced the simple hydraulic lifters used in the 2.9, which were sometimes overly sensitive to oil contamination, often requiring the lifters to be replaced prematurely. However, one major design fault was not completely eliminated: Valve rockers and upper pushrod tips still received poor oil supply, resulting in eventual wear to these areas, and consequential valvetrain noise as a result of the increased clearance. Required replacement of these parts is common in older engines.

A somewhat-related SOHC version was introduced for the 1997 Explorer alongside the pushrod. It uses a jackshaft in place of a camshaft to drive a timing chain to each cylinder head. Three timing chains are used, one from the crank to the jackshaft, one in the front of the engine to drive the cam for the left bank, and one on the back of the engine to drive the cam for the right bank. This chain arrangement was prone to failure and Ford acknowledged this by extending the warranty on vehicles with this engine. The SOHC version is the last Cologne engine still in production, though it is rumoured it be phased out in the coming years, possibly in favor of the new Cyclone. It featured a variable length intake manifold and was good for 210 hp (157 kW) and 245 lb·ft (332 N·m)f. Ford Power Products sells this engine as the SOHC-640.

A number of companies have produced forced induction versions of the engine.

A limited number of 24V BOA/BOB's have been Forced also.

In 1991 increased capacities for the 2.8 and 2.9 engines (3.5 and 3.7 liters, respectively), were first developed and introduced by D.P. Davies and sold by his company, VeeTech Engineering, in the UK. Two companies still produce large capacity conversions on the 2.8 & 2.9: Power Engineering and Specialised Engines..

Other Cars using the Cologne V6