From Ford Wiki
Jump to navigation Jump to search
For other Ford vehicles marketed as Ford Maverick, see Ford Maverick.

The Ford Escape (designated U204) is a compact SUV sold by the automaker Ford Motor Company introduced in 2000 as a 2001 model year and priced below the Ford Explorer. The Escape was sold in Europe as the Ford Maverick.[1] It was jointly developed with Mazda, in which Ford owns a controlling interest, and was released simultaneously with the Mazda Tribute. In the United States, Ford's Mercury division released a luxury version called the Mariner starting with the 2005 model year.

A hybrid version of the Escape was released in 2004, making it the first hybrid SUV.

The first generation Ford Escape was released in North America for the 2001 model year. It was slotted below the larger truck based Explorer in Ford's lineup, but was larger than the small SUV offerings from Honda and Toyota.[3] At the time, most sport utility vehicles used a truck based Body-on-frame design. Solid rear axles were commonly used due to their ability to carry heavy loads at the expense of a comfortable ride and good handling. Ford realized that most SUV owners did not take their vehicles off road, and decided instead to use a car-like Monocoque design with a fully independent suspension and rack and pinion steering for the Escape.[4] Although not meant for serious off-roading, a full time all wheel drive system supplied by Dana was optional which included a locking center differential activated by a switch on the dashboard.[5] The all wheel drive system normally sends most of the power from the engine to the front wheels. If slipping is detected at the front, more power will be sent to the rear wheels in a fraction of a second. The entire braking system was built by Continental Teves including the ABS and various related suspension components.[6] CKD production began in 2002 at Ford Lio Ho Motor Co. in Taiwan for various Asian markets.[7]

Crash test results for the Escape have been mixed. In the New Car Assessment Program administered by the USA based National Highway Traffic Safety Administration, the car received 5 out of 5 stars for driver protection and 4 out of 5 stars for passenger protection in a 35 mph (56 km/h) frontal impact.[8] The SUV received 5 stars for both driver and rear passenger in the side impact test. In the Insurance Institute for Highway Safety's 40 mph (64 km/h) frontal offset test, 2001-2004 Escapes received a score of "Marginal".[9] Vehicles equipped with the optional side air bags received a score of "Good" in the 31 mph (50 km/h) side impact test, while those without the optional air bags received a score of "Poor".[10]

All Escapes are equipped with a passive Immobiliser called SecuriLock. This feature includes a RFID chip embedded in the key which is read by the car each time the vehicle is started. If the vehicle fails to receive a valid confirmation signal from the key, the vehicle will not run even if the key is perfectly cut to match the original. Theft, Injury, and Collision losses reported to insurance companies for the Escape are among the lowest in its class.[11]

In 2004, the Ford Escape Hybrid was released. This hybrid electric vehicle is 75% more fuel-efficient than the regular Escape according to Environmental Protection Agency tests and was the first sport utility vehicle available to the public with hybrid technology. The Escape Hybrid also offers a 110 volt AC (150 watt) plug-in outlet, for powering small household accessories, as an option. The internal combustion engine in the hybrid model uses the Atkinson cycle for improved efficiency.

In January 2006, at the Washington Auto Show, Ford showed a prototype for an Escape Hybrid that would allow E85 fuel to be used.

The Escape and Tribute were updated for 2005 with a new base engine (the 2.3 L [2261 cc, 140 cu in][12] Duratec 23), which replaced the Zetec 2.0 L (1983 cc, 121 cu in) 127 hp (95 kW) 4-cylinder.[13] The most powerful engine remained the 200 hp (150 kW) Duratec 3.0 L (2976 cc, 181 cu in)[12] V6, with new engine mounts. Ford also added advanced airbag and seatbelt safety systems, an intelligent all wheel drive system, and exterior changes. 2005 was the first model year an automatic transmission was available on the base four-cylinder models. The automatic shifter was moved from the column to the console on all models equipped with automatic transmissions. Ford also deleted the recline feature on the rear seats to improve the safety of occupants in the rear seats in the case of a rear crash. 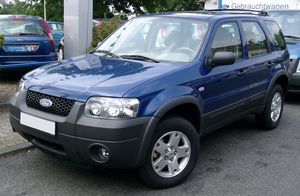 From 2001 to 2004 the Ford Escape was sold in Europe under the Maverick name, and replaced a rebadged version of the Nissan Mistral/Terrano II. Only two versions were made, the 2.0 L Zetec inline 4 engine with manual transmission and 3.0 L Duratec V6 with automatic transmission, both using gasoline as fuel. The absence of a diesel version did not help sales and the vehicle was temporarily discontinued in late 2003.

The Maverick was reintroduced in 2005 in certain European markets with the Duratec V6 engine. It was announced that the Maverick would be assembled in Russia for the Russian market. As of 2006, the Maverick was no longer sold in Europe, leaving Ford without a compact SUV until the 2009 Ford Kuga was introduced.

The Maverick was primarily designed for on-road use - sold with normal road tires, and to be used with front-wheel drive most of the time. A second "gear lever" for the transfer gearbox enabled four-wheel drive mode with no centre differential and a limited slip rear differential - this precluded using full-time four-wheel drive on the road as it caused undue wear on the transmission and tires.

A revamped 2007 Escape went on sale in the second half of 2006 for the Asian and Pacific markets (except South Korea, where the North American-market Escape is sold).[14] Major external changes include a redesigned front bumper, grille, headlights and hood, and rear bumper, as well as LED taillights.

On the inside, changes include a floor-mounted automatic transmission shifter, in place of the old column shifter, as well as a redesigned center stack comprising of audio and climate controls. Climate control is automatic on all models except the XLS. The Limited model also features full color-coded bumpers, wheel arch and side moldings, as well as side mirrors with integrated LED indicators. Rear drum brakes have been replaced by disc brakes all round.

The 3.0 L V6 has been modified to reduce fuel consumption by over 10%, while the 2.3 L 4-cylinder has improved mid-range torque and an electronic throttle, as well as a slight increase in power to 109 kW (146 hp). Both engines had been certified to meet Euro III emission regulations. A four-speed automatic carries over and is the sole transmission choice.

In the USA, the Escape has been recalled 10 times, although the bulk of the problems only affected the first model year.[15] In April, 2007 Ford announced it would recall nearly 500,000 Escape SUVs produced between 2001-2008 due to reported engine fires. Ford recalled those Escape year models because of improper sealing in the anti-lock braking system that could cause contamination and a short.[16] Ford has said the fires did not cause personal injuries and the Escape hybrid was not affected.

The 2008 Ford Escape debuted at the 2007 Los Angeles International Auto Show.[18] The North American-market Escape and its Mazda Tribute/Mercury Mariner siblings were redesigned in order to stay competitive with other new compact SUVs, however most of the internals have been carried over for the 2008 model year. The Escape still uses the CD2 platform[19]. Ford also included an electronic stability control system standard on the 2008 Escape.[20]

The updated Escape received some styling cues from the Explorer, Edge, and Expedition. Changes include a new grille with larger headlamps in the front fascia, while the sides were revised with cleaner lines and rounder wheel arches. The interior is also completely redesigned, including the newest standard Ford family navigation system.[21]

Other mechanical changes include a new 18.5 mm (0.73 in) rear stabilizer bar, revised suspension tuning, a new air induction system for the 3.0 L V6, and a new exhaust system on all Escapes. The braking system for the Hybrid versions has been revised with a vacuum assist unit that reviewers have said give the brakes a consistent feel over the entire travel of the brake pedal.[24] Previous versions of the Hybrid were reported to have a slightly mushy brake feel, primarily due to the fact that for the first part of the brake travel and braking the system is regenerating power instead of engaging the brake pads against the rotors.

Also in 2009, Ford's SYNC system is standard on the Hybrid, Hybrid Limited, and conventional Limited models, and optional on the XLS and XLT.

The Escape underwent some minor aerodynamic changes for 2009, including a revised front chin spoiler and rear tire spoilers. Along with the addition of rear tire spoilers is an optional 17" chrome-clad wheel equipped with a new Michelin "Low-Rolling-Resistance-Tire", slightly increasing ground clearance and improving traction over the standard 16" wheels and tires. Another new feature is Ford's Easy-Fuel capless fuel filling system.[25]

According to the IIHS, the 2009 Ford Escape, along with its cousins, the Mercury Mariner and the Mazda Tribute, received top marks for its performance in the frontal, side, and rear crash tests.[26] The vehicle received an overall score of "Good" in all categories and was named a "Top Safety Pick".