The Ford FE engine was a Ford V8 engine used in vehicles sold in the North American market between 1958 and 1976. A related engine, the Ford FT engine, was used in medium and heavy trucks from 1964 through 1978. The FE filled the need for a medium-displacement engine created by the discontinuation of the Lincoln Y-block V8 engine. The FE joined Ford's other V8s which included a small Y-block and the big block MEL engines.

FE series engines powered most full-size Fords, some mid-size and performance models, and many Mercurys from 1958 until 1971, and pickup trucks from 1965 through 1976.

Specific models that used FE engines include the AC Cobra MKIII, AC Frua, high-performance Ford Mustangs between 1967 and 1970, many Ford Galaxies including racing cars, some Ford Fairlanes, Ford Thunderbirds until halfway through 1968, and many others. The FE engine also saw use in industrial applications. 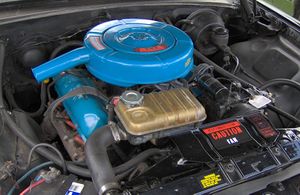 Introduced in 1958 as part of the Interceptor line of Ford V8 engines, the Ford 352 of 351.9 cu in (5.8 L) actual displacement was the replacement for the Lincoln Y-block. It is a 332 with 3.5 inches (88.90 mm) stroke and a 4 inches (101.60 mm) bore, and was rated from 208 bhp (155.1 kW) with a 2-barrel carburetor to over 300 bhp (223.7 kW) on the 4-barrel models. When these engines were introduced, they were called Interceptor V-8 on the base models and Interceptor Special V-8 on the 4-barrel models [6]. The Interceptor name has caused confusion as many members of the automotive hobby[who?] mistakenly presume that if it says Interceptor it is a Police Interceptor; in fact the Interceptor was the base-performance engine in 1958. For the 1959 model year, the FE engine series was renamed the Thunderbird V-8 and the Thunderbird Special V-8[7]. This series of engines usually weighed over 650 lb (290 kg).[8] 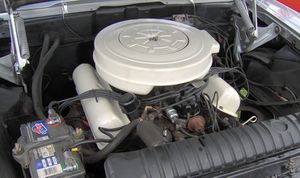 Edsel 361 engines were assembled in Cleveland Ohio, and Dearborn Michigan. They were standard equipment in the 1958 Edsel Ranger, Pacer, Villager, Roundup and Bermuda[10], and optional in the 1959 Corsair, Villager and Ranger[11]. The Edsel 361 was the very first FE block engine to be offered for sale in any market, having been introduced to the public on September 4, 1957, almost two months before any 1958 Fords were sold[12]. Edsel 361 engines were also issued to law enforcement agencies and other emergency municipal services as the 1958 Ford "Police Power Pack."[13] 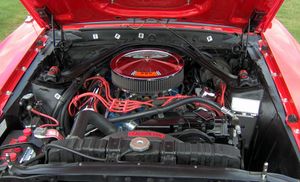 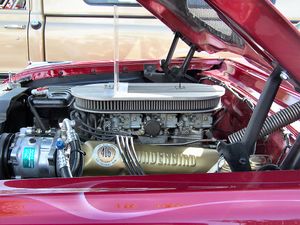 406 with TriPower intake and carbs, on a Ford Galaxie.

The 406 was developed purely for racing and was sold to the public only to meet racing targets. It was available for less than two years before it was replaced by the 427.

Testing of the 406, with its higher power levels, led to cross-bolted mains — where the main bearing caps were not only secured by bolts at each end coming up from beneath but also by bolts coming in from the sides through the block, a spacer was used between the cap and the block face. Each spacer was custom fitted. This design prevented the main bearing caps from "walking" under extreme racing conditions. This cross-bolting can be found today in many of the most powerful and modern engines from many manufacturers. 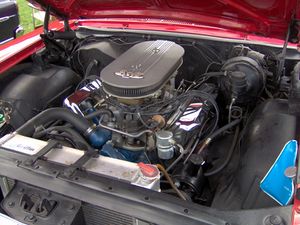 Ford's 427 V8 was introduced in 1963 as a race-only engine. It was developed for NASCAR stock car racing, drag racing, and serious street racers. The true displacement of the 427 was actually 425 cu in (7 L), but Ford called it the 427 because 427 cu in (7 L) was the maximum displacement allowed by NASCAR. The stroke was the same as the 390 at 3.78 inches (96.01 mm), but the bore was increased to 4.23 inches (107.44 mm). The block was made of cast iron with an especially thickened deck to withstand higher compression. The cylinders were cast using cloverleaf molds—the corners were thicker all down the wall of each cylinder. Many 427s used a steel crankshaft and all were balanced internally. Most 427s used solid valve lifters with the exception of the 1968 block which was drilled for use with hydraulic lifters.

Two different models of 427 block were produced, the 427 top oiler and 427 side oiler. The top oiler version was the earlier, and delivered oil to the cam and valvetrain first and the crank second. It gained a reputation for insufficient crankshaft lubrication under severe usage; under extremely hard acceleration oil in the pan would tend to slosh back, uncovering the oil pickup. The side oiler block, introduced in 1965, sent oil to the crank first and the cam and valvetrain second. This was similar to the oiling design from the earlier Y-block. The engine was available with low-riser, mid-riser, or high-riser intake manifolds, and either single or double four-barrel carburetion on an aluminum manifold. Ford never released an official power rating. Other models were rated at over 400 hp (299 kW).

In addition, Ford also produced tunnel-port heads and matching intakes for the FE engine. These lacked the limitations imposed by the other intakes' need to squeeze the intake port between two pushrods by running the pushrods through the intake ports in brass tunnels.

The 427 FE engine is currently enjoying a surge in popularity among Ford enthusiasts, and there are now a few companies producing aftermarket aluminum or iron replacement blocks. 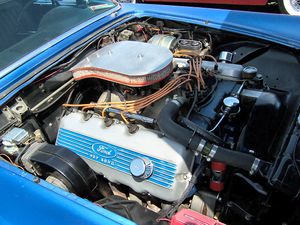 427 SOHC in a Ford Thunderbird

The engine was based on the ultra high performance 427 side-oiler block, providing race-proven durability. The block and associated parts were largely unchanged, the main difference being use of an idler shaft instead of the camshaft in the block, which necessitated plugging the remaining camshaft bearing oiling holes.

The heads were newly-designed cast iron items with hemispherical combustion chambers and a single overhead camshaft on each head, operating shaft-mounted roller rocker arms. The valvetrain consisted of valves larger than those on Ford wedge head engines, made out of stainless steel and with sodium-filled exhaust valves to prevent the valve heads from burning, and dual valve springs. This design allowed for high volumetric efficiency at high engine speed.

The idler shaft in the block in place of the camshaft was driven by the timing chain and drove the distributor and oil pump in conventional fashion, with the same practical limit of about 7,000 rpm for the stock oil pump (a maximum of 20.5 US gallons (78 L) of SAE 40W per minute at 70 psi (480 kPa). An additional sprocket on this shaft drove a second, six foot long timing chain, which drove both overhead camshafts. The length of this chain made precision timing of the camshafts a problem at high rpm and necessitated a complex system of idlers.

The engine also had a dual-point distributor with a transistorized ignition amplifier system, running 12 amps of current through a high voltage ignition coil.

Ford's plan was cut short, however; although Ford sold enough to have the design homologated, NASCAR effectively legislated the SOHC engine out of competition (despite permitting the hemi), and the awaited 1965 SOHC vs. Hemi competition at the Daytona 500 season opener never occurred. This was the only engine ever banned from NASCAR. Nevertheless, the 427 found its niche in drag racing, powering many altered-wheelbase A/FX Mustangs (after NHRA banned it from stock classes),[22] and becoming the basis for a few supercharged Top Fuel dragsters, including those of Connie Kalitta, Pete Robinson, and Lou Bany (driven by "Snake" Prudhomme).[22] 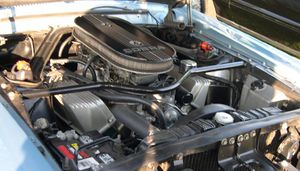 The 427 was impractical to manufacture economically for street use; it required tighter tolerances during manufacture than Ford's regular engine plants could deliver. Therefore, Ford combined attributes that had worked well in previous incarnations of the FE: a 3.98 inches (101.09 mm) stroke and a 4.13 inches (104.90 mm) bore, creating an easier-to-make engine with nearly the same displacement. The 428 cu in (7 L) engine used a cast nodular iron crankshaft and was externally balanced.

The 428 Cobra Jet, launched in April 1968, was a version of the 428 FE engine built for performance rather than cruising smoothness. The 428 Cobra Jet could be made on a regular production line, not requiring the exacting tolerances required by the 427. The 428SCJ used special cylinder head casting # C8OE-6090-N. This casting had larger intake ports and valves than production FE. The Cobra Jet used a strengthened version of the 428 block with an extra main bearing webbing and thicker main caps than the standard block. The CJ used heavier connecting rods with a 13/32 rod bolt and a nodular iron crankshaft casting # 1UB. The engine was underrated at 335 hp (250 kW) at 5200 rpm. The 428 Cobra Jet actually produced 400 to 410 hp (299-306 kW).

The 428 Super Cobra Jet used the same top end as the 428 Cobra Jet but the crankshaft, connecting rods, and pistons are different. Cast high-performance pistons, a nodular iron crankshaft casting # 1UA was used as well as heavier 427 "Le Mans" connecting rods with capscrews instead of bolts for greater durability. The heavier connecting rods and the removal of the centre counterweight on the crankshaft 1UA, required an external weight on the snout of the crankshaft for balancing. An engine oil cooler was standard equipment with the Drag Pack and 3.9 or 4.3 rear end gear ratios. This engine was also underrated at 335 brake horsepower (250 kW).

With the 428 the FE series block had been taken to the extremes of its capacity; no more growth was possible. The FE advances in engine technology had allowed its use across 3 decades. These advances included a thinwall casting process that made the engine comparatively light for its displacement, and the use of nodular iron for its crankshafts.

In the late 1960s however, Ford reviewed their entire engine family. The 335-series engines, commonly referred to as Cleveland engines, were designed to replace the largest of the small-block Windsor engines, with the 335 beginning at 351 cu in (5.8 L). The medium range of displacement needs was met by the 400M engine, a Cleveland-style block with a raised deck allowing it to use a longer stroke crankshaft giving a displacement of 400 cu in (6.6 L). The 385-series engine was to replace the MEL line in large cars and trucks. These began to be fitted to cars starting in 1973. However, the 385-series 429 replaced the 428 in some applications. The FE engines were gone from Ford cars by 1972 but lingered in trucks into the mid-1970s. In the late 1970s the Dearborn Engine Plant that produced these engines was completely retooled to produce the 1.6 L engine introduced in the Ford Escort in 1981.

In the late 1980s when both Ford and GM revamped their V8 offerings, many of the FE's designs were incorporated in the new engines, including the deep skirt, cross-bolting of the mains and thinwall casting.