From Ford Wiki
Jump to navigation Jump to search
For a complete overview of all Falcon models, see Ford Falcon (Australia).

The Ford FG Falcon is a full-size car produced by the Ford Motor Company of Australia since 2008. The FG series is the current model of the Ford Falcon and is the seventh generation of the car. It was first previewed at a press event on February 17 2008. The FG moniker references the now discontinued Fairmont Ghia and is said by Ford Australia to be the most technologically advanced Falcon in history. The FG Falcon has achieved a ANCAP 5 Star safety rating, being the first and only Australian manufactured car to do so. It achieved a score of 34.6 out of 37, whereas its main rivals, the locally built Holden Commodore and Toyota Aurion achieved only 27.5 and 30 respectively.[1]

The base engine is the same 4-litre straight-six from the previous model, the BF, but tweaked for better performance and fuel economy. It now uses VCT and produces 195kW at 6000 rpm. The turbocharged version of the straight-six now produces 270kW at 5250 rpm, and is available in the XR6 Turbo and G6E Turbo. The XR8 now uses the 5.4-litre Boss V8 that was previously in the BF series FPV GT and produces 290kW at 5750 rpm. There is an LPG E-Gas engine available on the 4.0L I6 models[2].

The Ford FG Falcon is sold in 7 different trim levels. There are three distinct groups. The base, G Series and XR. The G Series represents the premium luxury variants and the XR's are the sport variants. The models are XT, G6, G6E, G6E Turbo, XR6, XR6 Turbo and XR8. The ute variants include the base Falcon Ute, the R6, XR6, XR6 Turbo, and XR8. 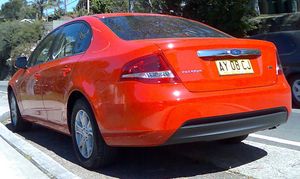 The XT is the base model of the FG Falcon range and costs $36,990 (AUD). The XT has a business class suspension tune: the rear suspension is Ford's Control Blade IRS, and the front suspension is virtual pivot link, the same architecture as found in the Territory. The brakes and plastic wheel covers are carried over from the BF Falcon. The engine is the revised I6 Barra Engine which now produces 195kW at 6000rpm and 391Nm of torque. The standard transmission is a new 5-speed auto, replacing the previous 4-speed. The ZF 6-speed auto is a $2,000 (AUD) option, and has quicker performance and slightly better fuel economy. The new styling is based around the kinetic design Ford Europe uses for their cars. The interior has been improved from the previous model. The centre console has been lifted to make for a more luxurious and spacious feeling. The interior is more roomy and has better entry and exit for front and rear passengers. The XT is now better equipped, it has a MP3 compatible CD player, 3.5mm auxiliary audio input jack, single zone automatic climate control, cruise control, 60/40 split fold-down rear seat back, front and rear power windows, four airbags, Dynamic Stability Control (DSC) with Emergency Brake Assist and a driver fatigue warning system[3]. From 1 September 2008, all XT models have been specified with alloy wheels as standard equipment, previously an extra-cost option.[4]

The base model in the XR range and features the same 4.0L I6 engine found in the XT and G6 and G6E. It has the same features as the XT, plus a 6-Speed manual transmission, 17 x 8 inch 5-spoke alloy wheels, Sports Control Blade Independent Rear Suspension (IRS), Sports body kit with side skirts and rear bumper, rear spoiler, front fog lamps, leather wrapped steering wheel with mounted audio controls, alloy pedal covers and cloth sports seats. It can also be had with an automatic transmission, with a choice of 5- or 6-speed. The latter proves to have slightly quicker acceleration than the manual. It sells for a base price of $39,990 (AUD).

The Turbo model of the XR6, plus 18 x 8 inch 5-spoke alloy wheels, limited slip differential, and upgraded front brakes. It uses the same 4.0L I6 Turbo engine as found in the G6E Turbo.

The XR8 has the same features that are found in the XR6 Turbo. The bulging hood and supporting emblems on the side skirts differentiate it from other XR models. The V8 is taken directly out of the previous model FPV GT, with 290kW of power and 520Nm of torque. However, it's slower than the XR6 Turbo despite having a 20kW advantage, and is also less economical and agile through corners due to the heavier front end.

Up from the XT, this is the base model in the G series. The G6 is the direct replacement for the Futura. It is powered by the same 4.0L engine and is mated to the same five speed auto. . Besides the suspension, which is the sport-luxury tune found in the G6E, the drivetrain of the car is the same as the XT. Equipment levels are increased in the G6. It comes with front fog lights, a leather wrapped steering wheel with mounted audio controls, rear parking sensors, sports body kit with side skirts and rear bumper, 17 inch alloy wheels. The G6 sells for $39,990 (AUD.[5] 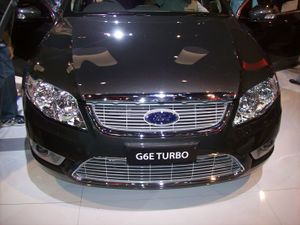 The G6E is a step up from the G6, it is the replacement for the old Fairmont Ghia. It includes all of the features of the G6, plus a ZF six-speed automatic transmission, dual zone automatic climate control, a premium audio system, leather seats, Bluetooth mobile phone integration, reversing camera, curtain and side thorax airbags, an 8-way power adjustable driver's seat, 17 x 8 inch 10-spoke alloy wheels, front scuff plates and an overhead sunglass console. It also features Mercedes-Benz styled side indicators on the side mirrors, similar to that on premium European cars. The G6E sells at $46,990 (AUD).

The G6E Turbo is the same as the G6E, except it has a I6 Turbocharged engine and other slight modifications, such as 18 x 8 inch 7-spoke alloy wheels, a boot mounted spoiler and iPod integration. The engine is the same as found in the XR6 Turbo, giving it a 0-100km/h sprint time of just 5.1sec. The G6E Turbo sells at $54,990 (AUD). 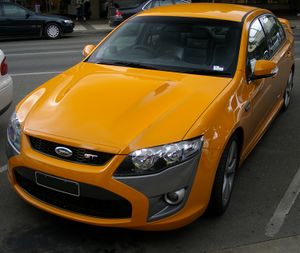 As usual for a Falcon range, Ford Performance Vehicles have made high performance variants of the range. They include the F6, GT, GT-P and the GT-E of the sedan range, and the F6 ute, Pursuit and Super Pursuit of the ute range. The two F6 models feature a 4.0L turbocharged DOHC 24 valve in-line six cylinder engine, which produces a maximum power of 310kW at 5,500rpm and maximum torque of 565Nm across the range from 1,950 to 5,200 rpm. All other models have a 5.4L Boss V8 engine, which produces 315kW at 6,500rpm and 551Nm of torque at 4,750rpm.