Ford Field is an indoor football stadium located in Detroit, Michigan that is the current home field of the NFL's Detroit Lions. It is across the street from Comerica Park. It regularly seats 65,000, though it is expandable up to 70,000 for football and 80,000 for basketball. The naming rights were paid for by Ford at $40 million over 20 years; the Ford family (including Lions owner William Clay Ford, Sr.) holds a controlling interest in the company.

Ford Field was originally planned to be an outdoor stadium, simultaneously with Comerica Park, which opened in April 2000, as part of a public project to replace Tiger Stadium and the Pontiac Silverdome. Ford Field was constructed after Comerica Park, opening in 2002. It cost an estimated $430 million to build, financed largely through public money and the sale of the naming rights.

The stadium's design incorporates a six-story former Hudson's warehouse, which had stood since the 1920s. Architecturally, the stadium shares a likeness with its sister stadium Ford Center, a multipurpose sports/concert arena located in downtown Oklahoma City. Hammes Company, a real estate development company in Brookfield, Wisconsin, developed the new stadium, as well as the warehouse.[1]

The presence of the warehouse allows for a seating arrangement that was unique among professional American football stadiums at the time of Ford Field's opening. The majority of suites at Ford Field are located in the Hudson Warehouse along the stadium's southern sideline, as are the lounges that serve the premium club seats on that side of the field. The bulk of the grandstand seats are located along the northern sideline and both endlines, with gaps in the stadium's upper half at the southwest and southeast corners. The upper deck on the stadium's northern sideline also contains one level of suites and a smaller section of club seating. A similar design was implemented at the renovated Soldier Field, albeit with the use of a new structure (as opposed to an existing building) to house four levels of suites.

Unlike most indoor stadiums, Ford Field allows a large amount of natural light to reach the FieldTurf field, thanks to immense skylights and large glass windows at the open corners. The windows along the ceiling are frosted to mimic old factories that are prevalent in Metro Detroit. The southwest corner provides the seating bowl and concourse with sunlight year-round and also offers fans a view of downtown Detroit. To prevent the stadium from becoming an overly imposing presence in the Detroit skyline, the playing field and lower bowl (100 level) were set below street level, similar to the design at adjacent Comerica Park.

Ford Field is one of the only venues in the NFL that has end zones in the east and the west (the others being Dolphin Stadium, the Georgia Dome and Cleveland Browns Stadium). The NFL has a rule against this type of construction, due to the sunlight which can be a major distraction to the players on the field. The NFL had to give permission for the east/west end-zone construction, because the Hudson's warehouse would have had to been altered otherwise. The natural light is not a distraction to the players in a day game, because the light only reaches as far as the sidelines, leaving the field still properly lit with the combination of artificial stadium lighting and sunlight.

The stadium has also been used to host the MCBA finals, where Michigan high school marching bands compete to be the best in the state. 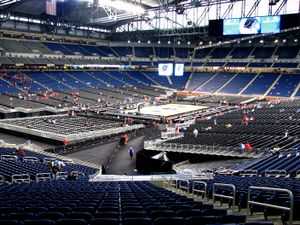 Ford Field hosted Super Bowl XL on February 5, 2006 as the Pittsburgh Steelers defeated the Seattle Seahawks, 21–10 to win their 5th Super Bowl championship. It also marked the final game in the 13-year career of Detroit native and 10-year Steelers running back, Jerome Bettis.

The stadium is home to the Motor City Bowl featuring a top Mid-American Conference team and a Big Ten Conference team. It has also hosted the annual Mid-American Conference Championship Game since 2004. On December 13, 2003, Ford Field hosted the largest crowd ever to attend a basketball game, as 78,129 people packed the stadium for the Basketbowl, where the University of Kentucky defeated Michigan State University, 79–74. The MHSAA Football Finals also take place on Thanksgiving weekend, drawing over 60,000 fans.

The University of Detroit Mercy and Ford Field hosted the 2008 NCAA Basketball Tournament regional semifinal and final games (March 28 and 30, 2008), will host the 2009 Final Four (April 4 and 6, 2009), hosted by University of Detroit Mercy, and the 2010 Frozen Four (April 8 and 10, 2010). For the 2008 NCAA Basketball tournament, the court was placed in the center of the football field rather than in an end of the stadium. This was the first time this configuration was used for NCAA Tournament play with the new 70,000 seat capacity rule in effect.[2]