The Flathead was the first independently designed and built V8 engine produced by the Ford Motor Company for mass production and ranks as one of the company's most important developments. Before the 1932 introduction of this engine (and the accompanying Ford V-8 automobile), almost all production cars aimed at the average consumer used straight-4 and straight-6 engines. "Multi-cylinder" engines (like V-8s and even V-16s) were produced, but were not intended for mass-consumption. In the United States the Flathead was replaced by the Ford Y-block engine in 1954.

The Flathead was licensed to other producers, including car and truck manufacturers in the Soviet Union. It was used by Simca in France until 1961 for cars and even later on the Simca V8 military truck.

The Flathead was on the Ward's 10 Best Engines of the 20th Century list.

This design had the camshaft above the crank, as in a modern pushrod operated overhead valve engine. Valves for each bank were mounted inside the triangular area formed by the "Vee" of cylinders. The intake manifold fed both banks from inside the Vee but the exhaust had to pass between the cylinders to reach the outboard exhaust manifolds. Such an arrangement transferred exhaust heat to the block, imposing a large cooling load; it required far more coolant and radiator capacity than equivalent overhead valve V-8 engines. The simple design left much room for improvement, and the power available after even low cost modifications was usually substantially more than could be obtained from an overhead valve inline six cylinder engine of similar displacement.

A simple three-main bearing crank used the common V8 practice of using each throw for two connecting rod big ends, one for each bank. The short crankshaft proved quite durable in comparison to six cylinder engines when roughly handled. For these reasons, the flathead Ford became a favorite among hot rodders, and this in turn led to a rich supply of aftermarket performance parts. With the use of specialized pistons or connecting rods the stroke of the crank could be increased by welding and regrinding as a method of increasing engine displacement, usually in combination with overboring as described below. The sought after crank by hot rodders is the four inch (102 mm) stroke Mercury version. It can be identified by the clean out plug in the front of the crank. It measures 5/8" on the Mercury crank and 3/8" on the 3 3/4" Ford crank. These 4" cranks came in the 49 to 53 engines.

As with any V8 the block was relatively light for the displacement supported. The bottom of the block formed the parting line for the main bearing caps. The most complex part of the block was the exhaust passage routing. As the exhaust valves were on the inside of the V and exhaust flow was initially downward, the path had to pass around the cylinders. Since each cylinder was also surrounded by a water jacket, the space for the exhaust flow was somewhat restricted, so the exhaust passages were tall and narrow in some locations. The gas flow past the rough sand castings could be greatly improved by polishing the passages. The capacity of the block for overboring (beyond normal boring for wear compensation) was limited by the configuration and the metal available. It was prudent to overbore before relieving and polishing the ports, as a casting flaw such as a sand pit might be revealed, usually fatal to further use of the block. The blocks with the factory 3 3/16 (3.1875) inch bore can usually be safely bored 1/8 inch over standard to 3.3125 inches (84.14 mm) and sometimes can be bored 3/16 inch over standard to 3.375 inches (85.7 mm), increasing displacement a little over 12%.

The engine built from 1932 to 1935 had poured main bearings which required skill and machine shop equipment to refurbish. Part of the 1936 production and all production from 1937 to the end of flathead V8 production had both replaceable shell main bearings and connecting rod inserts (unlike the contemporary GM products), enabling straightforward and low cost rebuilding, another reason why the Ford was a favorite of amateur mechanics.

Also unlike the GM products, Ford products used an oil pump for lubrication for the main and rod bearings, as do all modern vehicle combustion engines. While this offered no special performance advantage it did eliminate a complex oil jet system in the oil pan. As a side benefit to a prospective purchaser of a used vehicle, this also enabled the condition of the connecting rod and main bearings to be determined indirectly by observation of the analog oil pressure gauge after the vehicle was warmed up, provided that oil of normal viscosity was in use.

The left side exhaust manifold exhausted to the front, where a crossover pipe took the exhaust to the forward end of the right side manifold, in turn exhausting to a single pipe at the rear. A common conversion was to block off the right forward manifold entrance and route the left side exhaust to a new pipe to form a dual exhaust system with better flow characteristics. These typically involved installation of free-flowing mufflers, which if at a legal noise level still allowed low frequency sounds to pass, giving a characteristic rumbling dual exhaust sound to these systems. In the 1950s shortcut exhaust outlets with manually removed covers were added to street machines in emulation of vehicles intended for high speed straight line racing on dry lake beds, typically located just behind the front wheel, although chromed external runners sometimes extended to just forward of the rear wheel. These covers and their pipes were referred to as lake plugs, also used legally in sanctioned drag racing and illegally in unsanctioned performance demonstrations.

More extreme modifications were to improve the airflow by removing material from top the block between the valves and the cylinders (called relieving), increasing the size of the inlet and exhaust passages, called (porting) and by polishing the sand-cast surfaces to improve gas flow. Increased compression ratios could be cheaply obtained by milling material from the head or by obtaining aluminum heads as aftermarket parts. Higher capacity intake manifolds were similarly available. Changing the camshaft to a higher performance version required head removal so that the valves could be held up out of the way, so this was usually done only as part of a substantial rework of the basic engine.

A popular modification for the flathead was conversion to an overhead valve configuration, and many such modification kits were available, including the Ardun heads[1] from Zora Arkus-Duntov who was to go on to fame as the "father of the Corvette". These conversions were not initially demanded by hot rodders looking for extra power, as they had not yet exhausted the capabilities of the flathead configuration, but were demanded by users of the engine in trucks and other such high load applications, where the constant flow of hot exhaust through the block to the exhaust manifolds caused the entire engine to overheat; the overhead valve heads routed the exhaust out more directly, and away from the block.

Ford flatheads are still hot rodded today, with a special land speed record class for flathead engines. The current record holder achieves 700 hp (525 kW) and 300 mph (483 km/h).[2] Note that the car broke 300 mph (480 km/h) but did not set a record. You have to make two passes in order to have a record. 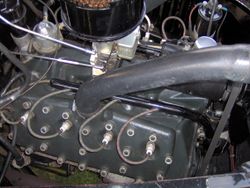 Types are classified by their displacement.

The original Flathead engine displaced 221 cu in (3.6 L). The engine block was cast as a single piece for durability ("monobloc") and a single-barrel carburetor fed the engine during 1932 and 1933 and produced 65 hp (48.5 kW) and 75 hp (56 kW) respectively. In 1934 a two barrel down draft carburetor was introduced which resulted in 85 hp (63 kW). Production of the original flathead 221 lasted from 1932 through 1936. These engines can be identified by having the water pumps located at the front of the heads. A similar 221 flathead was used in Fords for 1937 and 1938 but the block was revised to have the water pumps mount to the block. The new design also relocated the water outlet from the front of the heads to the top center of the heads. Output was 85 hp (63 kW). The 1932 through 1938 motors used twenty one studs to hold down each head and are known as "21 stud" motors. This motor continued to be made into the 1950s in Europe

In late 1938 Ford introduced the "24 stud" engine, named because it uses twenty four studs to hold down each head. This engine was introduced at the same time as the 239 motor. The power rating remained the same. This engine was used through 1942 for civilian use and saw some use in military vehicles during World War Two. Collectively all 221 motors are commonly referred to as "85 horse" motors.

Ford introduced the 239 cu in (3.9 L) motor in 1939. This was done to provide a more powerful engine for the Mercury cars which Ford Motor Company started making in 1939. This engine is very similar to the late 221 motors with the exception of having a larger bore and higher power. Initially the 239 was rated at 95 horsepower (71 kW) but that was changed to 100 horsepower (75 kW) in 1941 with no real change in power produced. The 239 was produced through 1953 with a major redesign in 1949. The 1949 to 1953 motors have a revised cooling and ignition system. Collectively all 239 motors are referred to as "100 horse" motors. This engine was used in Ford's transit buses during their short stint in the transit bus business from the late 1930s to the early 1950s

A 136 cu in (2.2 L) version was introduced in the United States in 1937. The engine was produced in Europe in 1935 and 1936. Producing 60 hp (45 kW), the engine was used in the many standard-line Ford vehicles based on the car platform of the era. It was not very popular with U.S. buyers who were used to the faster 85 horsepower (63 kW) cars. The engine was very popular as a powerplant for midget race cars after World War II. This engine is most commonly referred to as the "60 horse" flathead, or the V8-60. It was replaced by the 226 straight-6 in the 1941 Fords.

While earlier Ford V8s had the distributor driven directly from the forward end of the camshaft, and so at an inconvenient location for maintenance, this final flathead used a right angle gear drive from the camshaft, placing the distributor atop the engine near the front and so readily accessible. The fuel pump was mounted centrally atop the rear of the engine, driven by a reciprocating pushrod from a lobe on the camshaft. High mileage engines were subject to pushrod wear that affected fuel delivery, corrected by the addition of a simple aftermarket cap to the pushrod.

In the song "Hot Rod Lincoln", the engine referred to in the original lyrics was a Lincoln V-12 not mentioned in the Commander Cody version.