The Ford Focus is a compact car sold in the North American market. It was introduced in 1999 as a 2000 model year as a replacement for the Ford Escort and the Mercury Tracer. It received a revamp for the 2005 model year, and the second generation was introduced for the 2008 model year. Sales in the United States for calendar-year 2007 comprised 173,213 units, [1] making it the #3 best-selling domestic-nameplate car (behind the Chevrolet Impala and Cobalt), #9 best-selling of all cars and #16 best-selling vehicle, according to Reuters Top-20 U.S. Vehicle Sales Scorecard.

After 2005, the North American version was sold in the U.S., Canada, Mexico and some Latin American countries, while the newer European version was available in other worldwide markets. The European Focus II replaced the older model Focus in Mexico by early 2007. Unlike previous small Fords in the North American market, including the Pinto, the Escort, no Mercury version was sold. The U.S. Focus is the smallest of Ford's sedans, listed from smallest to largest: Focus, Fusion, Taurus, and Crown Victoria.

For MY 2008 the Focus was completely restyled, including Ford's signature bar grill design. It was unveiled at the 2007 North American International Auto Show. A two-door coupe is offered for the first time in addition to the 4-door sedan. 3-door and 5-door hatchbacks as well as the wagon were dropped. The interior was drastically redesigned, implementing Ford's "Ice Blue" lighting for the first time. It also features a message center on the top of the dashboard, which displays radio information.

According to Design Head Lon Zaback, the new Focus "appears to be a little bit shorter and have shorter overhangs. It has a much more sporty appearance because of some of the proportional things we did with it."[14] New features include ambient lighting, new seats, brushed aluminum dashboards, and the new Ford Sync to integrate electronics into the automobile.

The Microsoft designed Sync technology allows Bluetooth connectivity with enabled phones, MP3 player hookups, and voice activation for both calling on Bluetooth synced phone as well as voice-activated browsing of media players, as well as other features for phone connectivity and will also be fully upgradable. Sync is optional equipment on the 2008 Focus SE with an MSRP of $395. It is standard equipment on the 2008 Focus SES. [15]

Optional ambient lighting in the Focus uses LEDs placed in the front and rear footwells and the cup holders. "The driver or front-seat passenger can choose from seven different colors—red, blue, aqua, purple, white, green and yellow—by cycling through a dash-mounted switch." Standard equipment will include a tire pressure monitoring system.

The 2.3 liter Duratec engine is discontinued for the redesign, leaving only the 2.0 liter Duratec 20 engine. Power is increased in the 2.0 liter engine, up to 140 hp (104 kW) from 136 hp (101 kW), along with other changes to increase fuel efficiency. The chassis was lightened and stiffened and overall weight is decreased by 30 lb (14 kg) from the previous model. Highway mileage is rated at 35 mpg using the new 2008 United States Environmental Protection Agency‎ standards.[16]

Like many compact cars, demand for the Focus has increased because of high gasoline prices in 2008. The Focus currently takes 7.6 percent of the U.S. small car market. To meet the this increasing demand, Ford increased output for 2008 by 30%.[17]

The Insurance Institute for Highway Safety has given the Focus a Good overall rating in the frontal offset crash test and an Acceptable rating in the side impact test. Front and rear side curtain airbags and front seat-mounted torso airbags are standard.[18][19]

When the third generation of the International Ford Focus debuts in 2009 or 2010, it will be sold in North America and in all other worldwide markets.[24]

Presently, Ford uses the Wayne Stamping & Assembly facility for the manufacturing of the Focus. It is located in Wayne, Michigan. The other former facility is located in Hermosillo, Sonora, Mexico. The plant in Wayne currently builds all varieties of the car. The Mexican plant used to build the ZX3/ZX5/FocusSVT hatchbacks prior to consolidation of production in Michigan in 2006. That cleared the way to assemble the Ford Fusion, Mercury Milan, and Lincoln Zephyr/MKZ in Hermosillo.

Besides rallying, the Focus is also used in the National Auto Sport Association Spec Focus Series(SF). A Focus was once used in the Sports Car Club of America Speed World Challenge Touring Car Championship.

The Focus is also gaining popularity in Rally racing, partially due to the NASA Rally Spec Focus program. 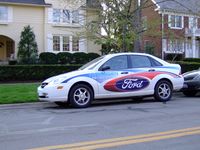 There is a Ford Focus Fuel Cell Vehicle (FCV).

On 2005 and 2006 models in the US and Canada, the second generation Focus are coded with a 'ZXx' designation. ie ZX3, ZX4, ZX5, ZXW; these designations have been removed from Ford's website and the call-outs deleted from the liftgates/trunklids of 2007 models. 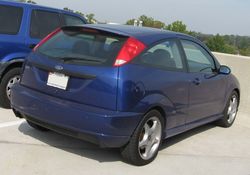 These additions, coupled with an increased 10.2:1 compression ratio, bumped horsepower from 130 to 170 while still achieving good fuel economy and low emissions. Ford went to German manufacturer Getrag to provide a six-speed manual transmission which is shared with the Mini Cooper S. This transmission was a twin layshaft design and included a dual mass flywheel to eliminate vibration. Other changes to complete the package included sharper steering through an increased boost ratio in the steering rack, larger disc brakes on all four corners and stiffened suspension with larger anti-roll bars. Inside the car was offered with several leather bits including seats, and steering wheel. The shifter knob, emergency-brake handle, and their respective boots are also in black leather. Options included a powered glass sunroof, 8 speaker Audiophile sound system with 8" sub-woofer, a cold weather package with heated seats, traction control, a 115V block heater, and heated side mirrors and, for 2003 and 2004 models, HID xenon headlamps. 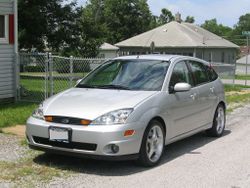 In 2003 the SVT was offered in the 5-door bodystyle and an all new European Appearance Package for 3-doors only. It included all available options plus full leather Recaro seats and 15 spoke dark argent colored wheels. The exterior was available in two new colors, Screamin' Yellow and Competition Orange. The only option the 5-door did not include were the sideskirts. In 2004, its final year of production, the Euro package was available in the 5-door model as well. Also the 5 spoke wheels were no longer available and a 6 spoke design was the replacement.

2005-2007 ZX4 ST The North American SVT Focus was discontinued in 2004. Its replacement is the ZX4 ST sedan, which has a 2.3 litre, 151 hp (113 kW) (154 ft·lbf (209 N·m) (SAE) Torque) Duratec driving a 5 speed MTX-75 manual transmission with reverse lock-out. While horsepower is down from the SVT, acceleration is only slightly affected due to the higher differential ratio. The 2005 ST had the same dampers and stabilizer bars that the SVT used, but with significantly softer springs. The ST has a unique interior and 16" wheels. It is also equipped with a spoiler, color-keyed fascia, and 4-wheel anti-lock disk brakes. Handling balance is roughly the same as that of the SVT but has a milder ride due to the softer springs and generates less grip due to the narrower 205/50R16 all season tires. The 2005 ST included everything from the SES package with additional options such as heated seats, heated mirrors, full leather interior, sun/moonroof, and the Audiophile package controlled by a Blaupunkt headunit. 2007 was the final year for the 2.3L engine in the Focus. For the 2006 and 2007 ST's the suspension geometry was changed in an effort to provide a softer ride.

Despite its radical styling (the hatchback version in particular), and some controversial safety recalls in North America, the car has been a sales success across the globe, even in the United States, where Ford has traditionally failed to successfully sell its European models. It was elected Car of the Year in 1999. The Focus won the North American Car of the Year award for 2000.

The Focus, unlike the Escort, was never offered in a panel van body style in the U.S.; however, a commercial Focus is available in Europe.

In the US spec models, despite a series of major recalls early in the car's life[25], reliability has steadily been improving.[26] The Focus received a Consumers Digest Best Buy Rating for 2005,[27] an award that takes numerous factors into consideration, including reliability and recall history, although Lemon-Aid still described it as "glitch ridden" up until at least 2004.

Since its launch in 1998, the first generation Focus has won over 60 awards including 13 Car of the Year awards in both Europe and North America, and more recently, the best family car ever (Autocar UK 2003). The Focus was on Car and Driver magazine's Ten Best list for five consecutive years between 2000 and 2004. Motor Trend magazine had also given the Focus favorable reviews, with comments like "As entry-level sedans go, few can touch Ford's Focus on the fun-to-drive front".[28]