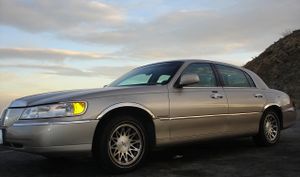 The Ford Panther platform is one of Ford Motor Company's full-size, rear-wheel drive sedan automobile platforms; the other is the Australian Ford Falcon.

As of the 2008 model year, it is the oldest vehicle platform in current use in North America. It uses the body-on-frame construction with live rear axle suspension common when it was introduced, but now almost exclusively found in heavy SUVs and trucks. It was introduced in 1978 for the 1979 model year as the response to downsizing of full-size cars from AMC, Chrysler, and GM. As downsizing continued in the 1980s, Pontiac, Oldsmobile, and Buick, as well as AMC and Chrysler dropped out of the traditional full-size segment entirely. During trying periods for Ford it was scheduled for cancellation on several occasions, as early as 1985. It has outlasted its GM counterpart, the B-platform which was used for the Chevrolet Caprice and Buick Roadmaster, along with its extended-wheelbase version the D-platform used for Cadillac Fleetwood, until their cancellation in 1996. The durability resulting from the body on frame construction (which allows easier repair after minor collisions), the cars' low price, and their relatively simple design make the Panther cars appealing as fleet vehicles, including police interceptors and taxicabs. The Lincoln Town Car appeals largely to older clients and is the most commonly used limousine in the United States and Canada, due to it's ability to be easily "stretched" by lengthening the frame, without compromising chassis strength. The Panther platform is still in production as of 2008 and is currently committed to production until at least 2011. [1]

The first Panthers were the Ford LTD and Mercury Marquis. Both were available in coupe, wagon, and sedan bodies. In 1980, the Lincoln Continental and the Continental Town Car were introduced on the Panther platform. The following year the Town Car became a model line of its own as the Continental name was applied to the Mark VI for 1981. While Lincoln coupes based on the Panther platform were discontinued in 1983, Ford and Mercury coupes lasted until 1987, and wagons were manufactured until 1991. After that, and an extensive redesign of the Ford and Mercury bodies, only full-size four-door sedans were produced. The Town Car's body was extensively reworked for 1990 and again for 1998.

The Panther platform is currently produced only at Ford's St. Thomas Assembly plant in Canada. Prior to its closure on 31 May 2007, the Wixom Assembly Plant was also a Panther assembly site (Lincoln Town Car). Assembly of the Town Car resumed at the St. Thomas plant in January 2008 following paint shop and other upgrades. Ford says they will continue the platform until at least 2011.

Vehicles that have used the Panther platform

Ford had considered a new global rear wheel drive platform, which could replace both Panther and Australia's Falcon and Territory. However in January 2009 Ford announced such efforts have been canceled,[1] leaving Panther without a direct replacement. In recent years, Ford has introduced new full-sized sedans based on the Ford D3 platform.

The Ford Interceptor concept (Ford D2C platform), debuted at NAIAS in 2007, was speculated to be a replacement for the Ford Crown Victoria, but nothing has been announced.