The Ford Pinto was a subcompact manufactured by the Ford Motor Company for the North American market, first introduced on September 11, 1970, and built through the 1980 model year. The rebadged Lincoln-Mercury version, the Mercury Bobcat debuted in Canada in 1974, and subsequently in the U.S. in 1975.

The AMC Gremlin arrived on the market on April 1, 1970, six months before the Pinto. As with the Pinto, which derived heavily from the Ford Maverick, the Gremlin derived from the AMC Hornet.

A team of stylists at Ford was assigned to design the Pinto's exterior and interior. However, Robert Eidschun's design of the exterior was eventually chosen, in its entirety. This was unusual, as most cars consist of several elements, each designed by a different stylist. The clay models of the Pinto were finalized in December 1968, which is when Eidschun left Ford to join Chrysler, where he went on to design elements of the successful Dodge Charger and Plymouth Duster.

While the previously introduced Ford Maverick offered either straight-6 or V8 engine and twin bench seats, the Pinto offered a straight-4 engine and bucket seats — more in keeping with small imports such as the Volkswagen Beetle and Toyota Corolla. Pintos were manufactured in St. Thomas, Ontario; Edison, New Jersey; and in Richmond, California.[1] 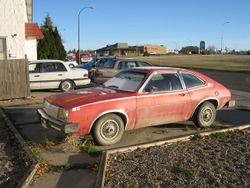 Mercury Bobcat, a mechanical twin of the Pinto

For many years, Ford sold many small models from its British line as captive imports, including the Ford Cortina. The Pinto would be later complemented by the imported, but even smaller front wheel drive Ford Fiesta, and formally replaced by the more modern Escort, patterned after the front wheel drive Volkswagen Rabbit, for the 1981 model year.

Compared with imports, seating was very low to the floor. Styling somewhat resembled the larger Ford Maverick in grille and tail light themes, but had a smooth fastback profile. Body styles included a two-door coupé with a conventional trunk, a three-door hatchback called the Runabout, a two-door station wagon, and the Ford Pinto Cruising Wagon, produced from 1977 to 1980 and styled to resemble a small conversion van (very much the trend in the late 1970s) complete with a round "bubble window" in the side panels. There was even a top of the line Pinto Squire, which had faux wood sides like the flagship Ford Country Squire. There were appearance packages, but never a factory performance package similar to the Cosworth Vega or the 304 V8 Gremlin X.

The car's mechanical design was conventional, with unibody construction, a longitudinally-mounted engine in front driving the rear wheels through either a manual or automatic transmission and live axle rear end. Suspension was by unequal length control arms with coil springs at the front and the live axle rear was suspended on leaf springs. The rack and pinion steering had optional power assist, as did the brakes.

Road & Track faulted the suspension and standard drum brakes, calling the latter a "serious deficiency". But they praised the proven 1.6 L Kent engine, adapted from European Fords. The much larger 2300 found in arch-rival Chevrolet Vega was an innovative brand new design using an aluminum block and iron head. This new engine design suffered from serious reliability problems. Consumer Reports rated the 1971 Pinto below the Vega but above the Gremlin.

Though the cars were thoroughly forgotten for some time, the Pinto seems to be enjoying success as an amateur-level vintage racing car, owing to its light weight, rear-wheel drive (RWD) layout, willing and durable Ford of Europe engines, and good car and parts availability.

Except for 1973 and 1980, the Pinto was available with two engines. The first was always the smallest and least powerful of the two and was the standard engine offered. The second was always a larger, more powerful engine available at an extra cost. For the first five years of production, only four cylinder inline engines were offered. As can be seen in the following breakout of available engines, Ford changed the power ratings almost every year.[2]

Of particular note is the introduction in 1974 of the Template:Convert/LoutAoffDbSoff OHC I4 engine. This engine would be updated and modified several times allowing it to remain in production into 1997. Among other Ford vehicles, a turbocharged version of this engine would later power the performance based Thunderbird Turbo Coupe, Mustang SVO, and the European-built Merkur XR4Ti.[2]

Initial Pinto deliveries in the early years used the English (Template:Convert/LinAonDsSoff) and German (2,000 cc/120 cu in) engines tuned for performance (see below). The 2,000 cc engine used a two barrel carburetor where just one bore was bigger than that used on the Maverick. With the low weight (not much above 2,000 lb/910 kg) and the SOHC engine it rated a 10.8 second 0-60 time. With the advent of emission control requirements, Ford moved from the European sourced to domestically sourced engines, using new or modified designs. New safety legislation impacted bumpers and other parts adding to the weight of the car, reducing performance.

Through early production of the model, it became a focus of a major scandal when it was alleged that the car's design allowed its fuel tank to be easily damaged in the event of a rear-end collision which sometimes resulted in deadly fires and explosions. Critics argued that the vehicle's lack of a true rear bumper as well as any reinforcing structure between the rear panel and the tank, meant that in certain collisions, the tank would be thrust forward into the differential, which had a number of protruding bolts that could puncture the tank. This, and the fact that the doors could potentially jam during an accident (due to poor reinforcing) made the car a potential deathtrap.

Ford was aware of this design flaw but allegedly refused to pay what was characterized as the minimal expense of a redesign. Instead, it was argued, Ford decided it would be cheaper to pay off possible lawsuits for resulting deaths. Mother Jones magazine obtained the cost-benefit analysis that it said Ford had used to compare the cost of an $11 ($NaN today, allowing for inflation) repair against the cost of paying off potential law suits, in what became known as the Ford Pinto memo.[4][5] The characterization of Ford's design decision as gross disregard for human lives in favor of profits led to significant lawsuits. While Ford was acquitted of criminal charges, it lost several million dollars and gained a reputation for manufacturing "the barbecue that seats four."[6] Nevertheless, as a result of this identified problem, Ford initiated a callback which provided a dealer installable "safety kit" that installed some plastic protective material over the offending sharp objects, negating the risk of tank puncture."[7]

The most famous Ford Pinto product liability case resulted in a judicial opinion that is a staple of remedies courses in American law schools. In 1981 in Grimshaw v. Ford Motor Co.,[8] the California Court of Appeal for the Fourth Appellate District reviewed Ford's conduct, and upheld compensatory damages of $2.5 million ($NaN today) and punitive damages of $3.5 million ($NaN today) against Ford. It also upheld the judge's reduction of the punitive damages from the jury's original verdict of $125 million ($NaN today). Of the two plaintiffs, one was killed in the collision that caused her Pinto to explode, and her passenger, 13-year old Richard Grimshaw, was badly burned and scarred for life.

However, a 1991 law review paper by Gary Schwartz[9] argued that the case against the Pinto was less clear-cut than commonly supposed. Twenty-seven people died in Pinto fires. Given the Pinto's production figures (over 2 million built), this was no worse than typical for the time. Schwartz argued that the car was no more fire-prone than other cars of the time, that its fatality rates were lower than comparably sized imported automobiles, and that the supposed "smoking gun" document that plaintiffs claimed showed Ford's callousness in designing the Pinto was actually a document based on National Highway Traffic Safety Administration regulations about the value of a human life rather than a document containing an assessment of Ford's potential tort liability.

Due to the alleged engineering, safety, and reliability problems, Time magazine included the Pinto on its list of the fifty worst cars of all time.[5] 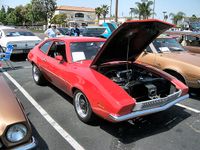 The Pinto Pangra is a modified sporting Pinto produced in limited numbers by a Ford dealer, FOULGER Ford in Arcadia, California. Approximately 55 were sold during 1973 and (to a limited degree) 1974, and in addition the components were sold in kit form. A Pangra cost approximately $5,000 ($NaN today).

The most visible modification was a slanted fiberglass nose with pop-up headlights. Internally, the stock 2 liter engine was fitted with an AK Miller turbocharger; a "Can-Am" suspension package with Koni dampers lowered the car and improved the handling; aluminum wheels with wider tires were fitted, as were Recaro seats, a revised dash with a new center console, full instrumentation, and a digital tachometer.