From Ford Wiki
(Redirected from Ford Prefect (car))
Jump to navigation Jump to search
For the character in The Hitchhiker's Guide to the Galaxy, see Ford Prefect (character).

The Ford Prefect is a line of British cars produced by the UK section of the Ford Motor Company, and a more upmarket version of its direct siblings the Ford Popular and Ford Anglia. It was introduced in 1938 and remained in production till 1941: returning to the market in 1945, it was offered till 1961. The car progressed in 1953 from its original perpendicular or 'sit-up-and-beg' style to a more modern 3-box structure.

Like its siblings, the car became a popular basis for a hot rod especially in Britain where both its lightweight structure and its four cylinder engines appealed to builders.

The Ford Prefect was introduced in 1938 and built by the Ford plant in Dagenham, Essex. The original Ford Prefect was a slight reworking of the previous year's 7Y, the first Ford car designed outside of Detroit, Michigan. It was designed specifically for the British market. It had a 1200 cc side valve engine with thermocirculation radiator (no pump) and the ability to be started by a crank handle should the battery not have sufficient power to turn the starter motor running from the 6 Volt charging system. The windscreen wipers were powered by the vacuum ported from the engine intake manifold - as the car laboured uphill the wipers would slow to a standstill due to the intake manifold vacuum dropping to near null, only to start working again as the top was reached and the intake vacuum increased. 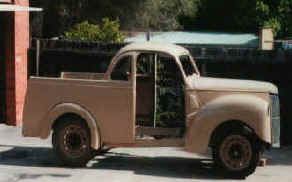 Post war, the Prefect design changed little in design until replaced in 1952. The headlamps moved into the wings and trafficators were fitted (internally lit semaphores springing out from the door pillars to signal left and right turns), though due to space restrictions these were left out on the Australian-built Ute. Only four door saloons were available on the home market, the two door sector being left to the Anglia but some were made for export.[3]

The brakes remained mechanically operated using the Girling rod system with 10 in (250 mm) drums and the chassis still had transverse leaf springs front and rear.

A Prefect tested by the British magazine The Motor in 1948 had a top speed of 61 mph (98 km/h) and could accelerate from 0-50 mph (80 km/h) in 22.8 seconds. A fuel consumption of Template:Convert/foutmig (Template:Convert/L/100 km mpgus) was recorded. The test car which had the optional leather upholstery cost £412 including taxes. In standard form they commneted that it was the cheapest 4-door car on the British market.[4]

In 1953 a much redesigned Ford Prefect was introduced alongside the similar Ford Anglia and remained in production until 1959. The old separate chassis had gone, replaced by integral construction, and coil independent front suspension supplanted the transverse leaf spring. Girling hydraulic brakes with 8 in (200 mm) drums were used. The old side valve 1172 cc engine was retained. Externally it can be distinguished from the Anglia by having vertical bars on the radiator grille and four doors.

Inside there were separate front seats trimmed in PVC with leather as an option and two circular instruments in front of the driver one containing the speedometer and the other a fuel and water temperature gauges. The gear change was floor mounted.The heater was an optional extra.

This was a reworked 100E body with the engine and four speed gearbox from the Anglia 105E, produced until replaced by the Ford Cortina. 38,154 were made [3], all in a two-tone colour scheme.

Drum brakes of 8 in (200 mm) diameter were fitted, hydraulically operated, and the suspension was independent at the front using MacPherson struts. The rear driven axle used semi elliptic leaf springs. The steering mechanism used a worm and peg system.

In addition to the UK, Ford Prefects were also sold in Australia, Argentina and Canada. The Canadian model was left-hand drive. The Australian built model was also available in a Coupe Utility or "Ute" form that had an open rear tray area similar in design to an American pick-up but based on the sedan and not derived from a truck or commercial vehicle. It was also license built in Latvia by Ford-Vairogs as Ford-Vairogs Junior.

In Douglas Adams's science fiction/comedy series The Hitchhiker's Guide to the Galaxy, one of the characters is an alien who adopted the name Ford Prefect while visiting Earth, believing that the name would be "nicely inconspicuous". Adams himself noted that Americans totally missed this joke (as this vehicle was never sold in the US). In the TV series, the character chose his name from a list including Anna Ford, Henry Ford and various other Ford automobile models. In the 2005 film adaptation, the character is seen to be nearly run over by a real Ford Prefect automobile.