The Ford River Rouge Complex (commonly known as the Rouge Complex or just The Rouge) is a Ford Motor Company automobile factory complex located in Dearborn, Michigan, along the Rouge River, upstream from its confluence with the Detroit River at Zug Island. Construction began in 1917, and when it was completed in 1928 it had become the largest integrated factory in the world.

The Rouge measures 1.5 miles (2.4 km) wide by 1 mile (1.6 km) long, including 93 buildings with nearly 16 million square feet (1.5 km²) of factory floor space. With its own docks in the dredged Rouge River, 100 miles (160 km) of interior railroad track, its own electricity plant, and ore processing, the titanic Rouge was able to turn raw materials into running vehicles within this single complex, a prime example of vertical-integration production. Over 100,000 workers were employed there in the 1930s.

Some of the Rouge buildings were designed by Albert Kahn. His Rouge glass plant was regarded at the time as an exemplary and humane factory building, with its ample natural light coming through windows in the ceiling. More recently, several buildings have been converted to "green" structures with a number of environmentally friendly features. However, many vehicular skeletons remain buried on the grounds of the Rouge.

In the summer of 1932, through Edsel Ford's support, Diego Rivera studied the facilities at the Rouge; these studies became a major part of his mural Detroit Industry, still on display at the Detroit Institute of Arts. 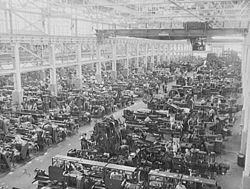 The Rouge's first products were Eagle Boats, World War I anti-submarine warfare boats produced in Building B. The original Building B, a three-story structure, is part of the legendary Dearborn Assembly Plant, which started producing Model A's in the late 1920s and continued production through 2004. After the war, production turned to Fordson tractors. Although the Rouge's coke ovens and foundry produced nearly all the parts of the Model T, assembly of that vehicle remained at Highland Park. It was not until 1927 that automobile production began there, with the introduction of the Ford Model A. Later Rouge products included the 1932 Ford V8, the original Mercury, the Ford Thunderbird, and four decades of Ford Mustangs. The old assembly plant was idled with the construction and launch of a new assembly facility on the Miller Road side of the complex, currently producing Ford F-150 and Lincoln Mark LT pickup trucks.

On May 26, 1937, a group of workers attempting to organize a union at the Rouge were beaten severely, an event later called the Battle of the Overpass. Peter E. Martin's respect for labor led to Walter Reuther, a UAW leader, allowing Martin to be the only Ford manager to retrieve his papers or gain access to the plant.[3]

After the 1960s, Ford began to decentralize manufacturing, building many factories across the country. The Rouge, too, was downsized, with many units (including the famous furnaces and docks) sold off to independent companies.

By 1992, only Mustang production remained at the Dearborn Assembly. Ford planned to replace that car with the front wheel drive Ford Probe, but public outcry quickly turned to surging sales. With the fourth-generation Mustang a success, the Rouge was saved as well. Ford decided to modernize its operations and built a new power plant to replace the original one, in which a gas explosion on February 1, 1999, killed six employees and injured two dozen more.

Tours of the factory were a long tradition. Tours of the facility began in 1924 and ran until 1980. They resumed in 2004 in cooperation with The Henry Ford Museum with multimedia presentations as well as viewing of the assembly floor.

The management of Dearborn Truck has decreed that no vehicles from other manufacturers may park in the main employee lot. A sign proclaims "Ford family vehicles only." Hourly workers from both Ford and Severstal facilities at the complex are represented by UAW Local 600.

The Ford's SS William Clay Ford was based out of the River Rouge Plant.

In 1999 Architect William McDonough entered into an agreement with Ford Motor Company to redesign its 85-year-old, 1,212-acre (4.90 km2) Rouge River facility.[4] The roof of the 1.1 million square foot (100,000 m²) Dearborn truck assembly plant was covered with more than 10 acres (40,000 m²) of sedum, a low-growing ground cover. The sedum retains and cleanses rain water, as well as moderating the internal temperature of the building, to save energy. The roof is part of an $18 million rainwater treatment system designed to clean 20 billion gallons (76,000,000 m³) of rainwater annually, and sparing Ford from a $50 million mechanical treatment facility.[5]