The Ford Shelby Cobra is a concept car that the Ford Motor Company unveiled at the 2004 North American International Auto Show in Detroit, Michigan. The Shelby Cobra concept is a roadster based on the original Shelby Cobra that Carroll Shelby developed in 1964.

In the case of the Shelby Cobra, the design is reminiscent of Carroll Shelby's performance-oriented sports cars that he developed in the 1960s. The first Cobra featured a large, high-performance Ford Windsor engine inside a small roadster that AC Cars had designed specifically for Shelby's vision. Likewise, the Shelby Cobra concept car is small and minimalist, eschewing conveniences found in most modern cars (such as air conditioning, a radio, anti-lock brakes, and even windshield wipers). In a press release to announce the debut of the concept car in 2004, Shelby echoed the aim of the design team: "That's the formula [...] It's a massive motor in a tiny, lightweight car." [1]

The double-overhead-cam cylinder heads and cylinders are fed by port fuel injection and racing-derived velocity stacks that are just visible within the hood scoop. For a low hood line, the throttles are a slide-plate design and the lubrication system is the dry-sump type, which relocates oil from underneath the engine to a remote tank. 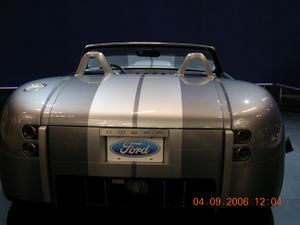 The rear of the Shelby Cobra concept.

The chassis for the Shelby Cobra concept car was based on an aluminum chassis used on the Ford GT production car, and modified to suit the concept car's front-mid engine placement. In fact, many parts of the GT were adapted for use in the Cobra, such as the suspension, several components of the frame, and the mounting brackets for the transmission (which is placed in the rear on the Cobra). Despite sharing large portions of its chassis with the Ford GT, the Shelby Cobra concept is almost 2 feet (0.61 m) shorter, with a wheelbase 7 inches (180 mm) shorter than the GT. 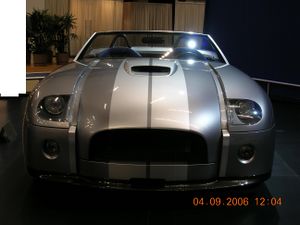 The front of the Shelby Cobra concept.

Although the Shelby Cobra concept was aimed to reflect the design of the older models of Cobras, the concept is dimensionally very different from the original. However, the design includes many common external features, such as a large grille opening, side vents, and large wheel arches. In line with Carroll Shelby's designs, the concept has a very minimalist look, which is continued in the interior. The concept omits many features common in modern cars, such as air conditioning and a radio. The placement of the transmission in the rear allowed for the driver and passenger seats to be placed closer together, adding to the compactness of the Cobra.

Ford has not yet announced any plans for producing the Shelby Cobra.