The Ford Telstar was an automobile sold by the Ford Motor Company in Asia, Australasia and Africa, comparable in size to the European Ford Sierra and the American Ford Tempo. It has been progressively replaced by the Ford Mondeo.

Like the smaller Ford Laser, the Telstar was in fact, based on a model produced by Mazda in Japan. It shared its platform with the Mazda Capella/626, the differences being confined to some styling, engine sizes, and specification. The first model (also known as the AR) was launched in 1983, replacing the Ford Cortina. Unlike the Cortina, or its Sierra successor, the Telstar was usually only available as a sedan or hatchback (known as the TX5). However, after 1988, a Telstar version of the 626 wagon was sold in Japan and New Zealand.

In Australia, the Telstar filled the gap in Ford Australia's product line-up, left by the Cortina in 1981. The original incarnation of the Telstar (the AR) was released in 1983 and was based on the first front-wheel drive Mazda 626 vehicle.

There was only one engine on offer – a 70 kW (94 hp) 2.0 L carburetor. The car boasted many distinctive features, such as push-button adjustable suspension (which it shared with its 626 sister car), and a digital instrument cluster (which it did not), and was Wheels magazine’s Car of the Year for 1983. 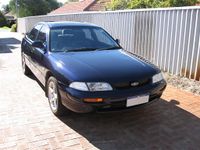 A facelifted model (the AS) arrived in late 1985, before the first all new model (the AT) appeared in 1987 with fuel-injection now standard.

Local assembly of the Telstar was short-lived, and for a while the model was almost replaced by the Ford Corsair, which was simply a facelifted version of the Nissan Pintara, as the two companies were sharing models under the Button Plan.

The two were sold side-by-side in the Ford range for a few years, with the Telstar only available as the high-performance TX5 hatchback. Later when Nissan ended manufacturing in Australia, the Corsair was dropped and the Telstar, fully imported from Japan, once again became Ford's offering in the medium size segment of the market, voted as Wheels magazine's Car of the Year for a second time in 1992 with the AX model (which boasted four-wheel-steering in top spec). It was replaced by the Mondeo in 1995.

In New Zealand, the Telstar, like the Laser, was assembled locally from 1983 (replacing the highly successful Cortina range) to 1997 (replaced by the Mondeo range), initially at Ford's original Seaview plant near Lower Hutt and later at the Ford/Mazda joint venture plant in Auckland, called Vehicle Assemblers of New Zealand (VANZ). The mechanically identical European specification Mazda 626 and Mazda 323 were initially assembled separately by Motor Holdings in Otahuhu but later joined the Telstar and Laser at VANZ.

The first generation Telstar was available in New Zealand in both sedan and TX5 hatchback forms, using Mazda 1.6L and 2.0L four cylinder engines. However, the absence of a station wagon version, in a market where there was strong demand for such vehicles, prompted Ford New Zealand to introduce a locally-assembled Sierra wagon in 1984.

As a result of this, New Zealand was the only major market in the world where the Telstar and Sierra were sold alongside one another, and it was not until 1988, that a Telstar wagon - unique to Japan and New Zealand - became available.

Another new Telstar generation appeared in 1992, in sedan and hatchback forms, using 1.8L and 2.0L fours, and a 2.5L V6. The wagon version of the previous generation Telstar, continued in local production (as did the Mazda 626) while the previous model sedan was offered as an entry-level model called Telstar Orion.

When the first Mondeos were sold abroad, Ford New Zealand offered a Telstar Contour and a Telstar Mystique (named after the US Ford and Mercury versions of the Mondeo respectively). A high performance V6 version, known as the Telstar Radisich after the New Zealand racing driver Paul Radisich, was also sold locally. The plant closed in 1997 and all of Ford New Zealand's product offerings are now fully imported.

The Telstar was always a popular seller for Ford New Zealand, and they are still common today in all generations on New Zealand's roads.

In Japan, the Telstar was introduced in 1982 on the new front wheel drive Mazda GC platform, in sedan and hatchback forms. A facelift was given in 1985.

This model was replaced in 1987 with a refreshed version on the Mazda GD platform. A station wagon appeared in 1990 on the old GD-based GV platform, while the sedan was updated the next year with the newer GE platform. From 1994 through 1996, a special Telstar II was produced alongside the Japan-only Mazda Capella on the CG platform.

The last Telstar, based on the GF platform, was released in 1997, but was only sold in Japan, as Ford was now marketing the Mondeo in the Asian-Pacific region. The Telstar was dropped by Ford of Japan in 1999, as the company sought to differentiate itself from Mazda by concentrating on European and American Ford models. Telstars were briefly available with Mazda's four-wheel steering.

In South Africa, the Telstar replaced the Ford Sierra in 1993, being assembled by Samcor alongside the Mazda 626. As in New Zealand, a Telstar Contour and Telstar Mystique were offered. In 1998, the Telstar was replaced by the Mondeo, which was later fully imported.

In Taiwan, the Telstar was locally assembled by Ford Lio Ho, the local Ford joint venture, in left hand drive, and remained in production in Malaysia until the early 2000s. It was also sold in Hong Kong, Singapore, Indonesia, Cyprus and the Philippines .