The Jaguar S-Type saloon was a model of automobile built by British manufacturer Jaguar. Available with 3.4 and 3.8 litre straight-6 Jaguar XK engines, the model was announced in 1963, but actual deliveries began in 1964.

In marketing terms, the 1963 S-Type was essentially a plusher version of the company's popular Mark 2 but with independent rear suspension, which general layout it shared with the larger Mark X saloon and the E-Type sports car. It shared the monocoque and much of its bodyshell with the Mark 2 including doors, windscreen and bonnet and much of the interior. The rear end was completely restyled around the new suspension and drew styling cues from the Mark X. The S-Type had a slightly revised front end with discreet eyelids over the headlamps, which were not altogether successful in their intended purpose of visually balancing the longer rear end. Heavier than the Mark 2, the S-Type was slower but had a better ride, however many felt that the handling was not improved.

It is thought that Jaguar developed the S-Type as a replacement for the Mark 2. The earlier car had been developed under the code name "Utah Mk II" and the S-Type was the "Utah Mk III". For various reasons – including the fact that the Mark 2 remained a strong seller in 1963 (six years old as a basic design at this point), and the Mark X was a poor seller – Jaguar decided to have all three models in its range concurrently.

In 1966, the Jaguar 420 saloon was added to the model range. (It should not be confused with the larger Jaguar 420G.) The 420 shared much of the basic bodyshell and technical specification of the S-Type but had the enlarged 4.2 L XK engine found in the facelifted version of the Mark X, the 420G. Visually, the 420 differed from the S-Type in having a completely revised front end, comprising new wings, bonnet and grille and a quadruple headlamp arrangement similar to that of the 420G.

The 420 was designed to bring a stronger visual resemblance to the 420G, and therefore a greater sense of continuity between the large and compact saloons of the Jaguar range. The extent to which this was a success is debatable, given that both the Mark 2 and S-Type remained in production alongside the 420, despite similarities in technical specification, for two years until 1968.

The S-Type was withdrawn in August 1968 with the arrival of the larger XJ6 but the name was revived in 2000 for the retro-styled mid-range Jaguar S-Type. 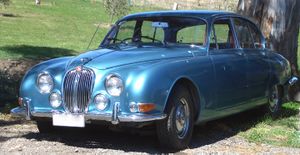