The Jaguar XF is a mid-size luxury car / sports sedan made by Jaguar Cars. It was launched in the UK in 2008 and replaced the S-Type in the company's lineup. The production version of the XF debuted at the 2007 Frankfurt Motor Show,[1] and customer deliveries commenced in March 2008. In January 2008, the XF was awarded the prestigious What Car? Car of the Year award, as well as taking away the prize in the executive car category. The XF was also awarded Car of the Year 2008 from What Diesel? magazine.

The XF was developed at Jaguar's Whitley design and development HQ in Coventry, UK and is built in Castle Bromwich, Birmingham, UK.

The Jaguar C-XF (for Concept-XF) was a concept car which indicated a new design direction for Jaguar Cars. It was revealed at the North American International Auto Show in Detroit, Michigan. The C-XF concept was a preview of the forthcoming Jaguar XF model.

Details of the concept were officially unveiled by Jaguar on 3 January 2007.

The current and previous generations of Jaguar cars were notably "retro" in design, being heavily influenced by styling cues from classic Jaguars from the 1960s. The C-XF represents a departure from that design strategy. Although the C-XF has four doors, its shape is very much that of a coupé, following a design trend started by the already successful Mercedes-Benz CLS-Class. Jaguar knows that this approach could limit the potential market for the car, but the thinking within Jaguar is that its current woes are down to an overly ambitious, poorly conceived and executed plan to turn Jaguar into a large-volume rival for BMW, Mercedes-Benz and Audi. So now, instead of building the 200,000 cars per year, mooted at the turn of the century it will aim for somewhat less than 100,000, turning Jaguar into an exclusive, low-volume manufacturer of high-quality premium sporting cars. Hence, before Jaguar's exit from the Ford group, the role of the large-volume rival against the established luxury German brands will be have been played by Volvo, the most successful and profitable company in now-defunct Premier Automotive Group, Ford's stable of luxury brands. The Jaguar XK was the first tentative step in this direction — the XF is the giant leap, as Ian Callum (Jaguar design director) puts it: "Jaguars should be perceived as cool cars, and cool cars attract interesting, edgy people." 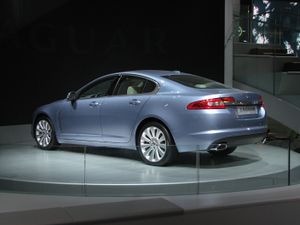 The styling of the finalised production XF varies from that of the C-XF only in a few small areas, most notably around front lights and nose, which incorporates an oval mesh grille harking back to the original XJ of 1968 and is destined to be a feature of future Jaguars. The boot lid has retained the S-Type's chromed blade to its edge, but now sports a "leaper" as well. Boot space and practicality is much improved over its predecessor, with the option of carrying a puncture repair kit instead of a spare wheel to create further space.

The basic sub-structure of the XF has been carried over from the S-Type, although the body has been stretched to meet crash safety requirements, and heightened to provide additional headroom while still retaining the "saloon within a coupé" proportions. The suspension and mountings are the same as that used on the XK, while the engine line-up is basically as that used in the S-Type. Three petrol engines are available, all carried over in modified form from the S-Type. The base model is the 3-litre V6, a heavily adapted version of the Ford Duratec V6. Two versions of the well-regarded Jaguar AJ-V8 engine are used in 4.2-litre form. The naturally-aspirated version produces 300 bhp (224 kW; 304 PS) whilst the supercharged used on the SV8 model produces 420 bhp (313 kW; 426 PS). Outside North America, the biggest-selling unit will be the 2.7-litre V6 twin-turbodiesel, this being the same AJD-V6 engine used in the S-Type and the XJ, in this application producing 207 bhp (154 kW; 210 PS). Sound and vibration insulation is provided by the addition of a special underbody tray and engine mounts, a tuned exhaust system, and a double bulkhead between the engine bay and passenger compartment. There is no manual transmission option, but its six-speed automatic gearbox has been programmed to shift 10% quicker than before, and can be manually selected using paddles behind the steering wheel. The normal drive selector lever has been replaced with a rotary dial that rises from the centre console once the engine start/stop button has been pressed.

Unlike its predecessor, the XF has no cloth interior option, with even the most basic model being fully trimmed in leather to even areas that have employed plastic on previous Jaguars. Real wood veneers remain a feature, but have been joined by aluminium trim to create a modern look to the passenger compartment. Another departure from the traditional Jaguar cabin ambiance is the use of pale-blue backlighting to the instruments, switchgear, and around major control panels. Some minor systems, such as the interior lighting, are controlled simply by touching the plastic light covers. The glove compartment also opens to the touch.

The XF’s entire body was developed using Computational Fluid Dynamics (CFD) before the car ever saw a wind tunnel. Every area from the outer skin to the lightweight, composite undertray to the cooling airflow (even the shape of the exterior mirrors) was optimised using this process. The higher, squarer tail is more efficient aerodynamically than a lower, rounded one, and the XF’s coupe-like roofline and raised bootlid lip improve airflow over the rear of the car. As a result, the XF has the best aerodynamic performance, in terms of drag, of any production Jaguar ever and is better than the race-bred, limited edition XJ220 supercar.

The Jaguar XF's standard audio system comprises a 140 Watt amplifier driving eight speakers and, dependent on the specification of the model chosen, there are two other audio options available.

The B&W system has been reviewed by journalists at Autocar magazine, who proclaimed it the best in-car system they have ever heard.[2]

The XF has been reviewed by two different shows on British TV: Top Gear (Driven By James May) and Fifth Gear. Models were also featured transporting the judges in the "Boot Camp" editions of the 2008 series of The X-Factor on ITV.

The Jaguar XFR, has a new AJ-V8 GenIII engine, which is supercharged and has been bored out to 5.0 litres ( from 4.2 litres from the standard version)

. The car has a acceleration of 0-60mph in 4.7 seconds, and hit a top speed near to 200mph. The car has new bumpers, air intakes, sills, grills, tailpipes, a boot-lid spoiler, and has special 20 inch alloy wheels. A "tweaked" XFR, producing 600bhp, hit a top speed of 225.675mph on Bonneville Salt Flats in November 2008.[3] Template:PistonHeads

As of November 2007, the following XF models are available in the UK (according to Jaguar UK):

(names as given on the Jaguar webpage)

Notice that the 3.5-litre V8 petrol engine, available for the XJ in Western Europe (but not in the UK), is not listed as an option for the XF, even outside the UK (see, for example, Jaguar DE or Jaguar PL).

As of April 2008, the following XF trims are available in North America:[1]