From Ford Wiki
Jump to navigation Jump to search
For the computer game of the same name, see Jaguar XJ220 (computer game).

The Jaguar XJ220 is a mid-engined sports car produced by Jaguar in collaboration with Tom Walkinshaw Racing as Jaguar Sport between 1992 and 1994. It held the record for the highest top speed of a production car (350 km/h, 217 mph) until the arrival of the McLaren F1 in 1994.

In the early days of the company, certain Jaguar employees had created an informal group they called "The Saturday Club" (so-named because they would meet after-hours and on weekends to work on unofficial pet-projects). In the 1980s, Jaguar's chief-engineer Jim Randle, as part of that group, began work on what he saw as competition for cars like the Ferrari F40 and Porsche 959. He envisioned what was essentially an updated XJ13 - a lightweight two-seater with a powerful mid-mounted V12 engine. Randle expanded on the idea by settling on all wheel drive for increased traction and better handling and an integral safety-cage so the car could be safely raced at extremely high speeds. From the outset, the intention was to create a vehicle capable of exceeding 320 km/h (200 mph).

Jaguar executives who saw the concept were sufficiently impressed to formally commit company resources to producing a car for the 1988 British Motor Show. Tom Walkinshaw Racing was tapped to produce a 6.2 L version of Jaguar's legendary V12 engine with four valves per cylinder, quad camshafts and a target output of 500 hp (370 kW; 510 PS). The all wheel drive system was produced by FF Developments who had experience with such systems going back to the 1960s and the Jensen FF. The styling of the car was done by Keith Helfet and included scissor-style doors similar to those in use by Lamborghini in several of their cars. The name XJ220 was assigned as a reference to the targeted top-speed of 220 mph (350 km/h). 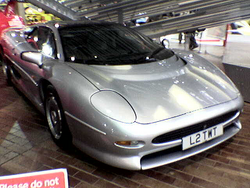 The prototype car was significantly heavier at 1,560 kg (3,439 lb) than other Jaguar racers like the XJR-9. But as it was intended to be, first and foremost, a roadcar, it would be more appropriate to compare it with something like the XJS; in spite of being 30-inch (762 mm) longer and 10-inch (254 mm) wider and even with the added weight of the all wheel drive system, the XJ220 was still 170 kg (375 lb) lighter than the XJS.

The car was officially announced in 1989 with a price of £361,000 ($580,000 USD) and prospective buyers were expected to put up a deposit of £50,000 ($80,000 USD) to be put on the waiting list for delivery. Because Jaguar promised to limit initial production to 220 units and that total production would not exceed 350, many of those who put deposits on the cars were speculators who intended to sell the car at an immediate profit.

The production version of the car was first shown to the public in October 1991 after undergoing significant changes. The most obvious of which was a completely different drivetrain and the elimination of the scissor doors. TWR was charged with producing the car and had several goals/rules in producing the car: the car would be rear wheel drive instead of all wheel drive; turbocharged V6 instead of the big V12; and performance goals of over 200 mph (320 km/h), 0 to 60 mph (97 km/h) under 4 s, and the lightest weight possible. 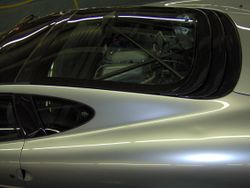 The XJ220's V6 engine is visible through the rear window

The 6.2 L V12 had been judged too difficult to get past increasingly strict emission regulations and there were also reportedly some design problems caused by the size of the power plant. It was replaced with a Tom Walkinshaw-developed 3.5 L V6 based on the engine used in the Rover Metro 6R4 rally car and fitted with twin Garrett T3 turbochargers, generating 549 bhp (409 kW; 557 PS) of maximum power at 7000 rpm and 473 lb·ft (641 N·m) of torque at 4500 rpm. This engine was not the first V6 in Jaguar's history, but was the first to use forced induction. In spite of the smaller displacement and half the number of cylinders, the engine produced more power than the V12 would have. However, potential customers judged the exhaust note to be harsh and the lag from the turbos to be an annoyance. Also missing from the production version of the car was the Ferguson all wheel drive – the production car had only rear driven wheels, through a conventional transaxle – and the ABS.

The car entered production in 1992 in a purpose built factory at Bloxham near Banbury, and the first cars were delivered to customers in July. Original customers included Elton John and the Sultan of Brunei.

Many of the initial customers were dissatisfied not only with the modifications to the original specification but the significant increase in delivery price from the original £361,000 to £403,000 ($650,000 USD). Another downfall to sales was the recession, causing many original speculators to not want to buy the car, either because they were not able, or did not think they could sell it on. Further complicating the issue was Tom Walkinshaw's offer of the faster (by acceleration, not top speed), more expensive and more exclusive XJR-15 which was based on the Le Mans champion XJR-9. Some customers reportedly either sued Jaguar or threatened to sue; in any case, Jaguar gave the customers the option to buy themselves out of the delivery contract. As a result, many of the owners challenged Jaguar in court where the Judge eventually sided with Jaguar. To reduce costs the use of parts from mass production cars had been extensive; for example the rear view mirrors came from the Citroën CX 2 Series.

In spite of the drama surrounding its creation, a total of 281 cars were made and by 1997, few of these remained available for sale new at £150,000. Nowadays, it remains a sought-after collectible sports car, fetching £100,000+.

A racing version called the XJ220C was also made. The XJ220C, driven by Win Percy won its first race, a round of the BRDC National Sports GT Challenge at Silverstone. Three works XJ220C's were entered in the 1993 Le Mans 24 Hour race, entered in the newly created Grand Touring Class. Two of the cars retired but one XJ220, driven by John Nielsen, David Brabham and David Coulthard took the checkered flag to take a class win, which was revoked two weeks later, when the XJ220C was disqualified for a technical infringement.

An XJ220 would also be used in the Italian GT Championship in the early 1990s, although this car had no factory support.

During the mid-nineties, the Sultan of Brunei and his brother Prince Jefri secretly bought hundreds of sports cars and had them custom appointed by various companies. One of these is this custom Jaguar XJ220 that has been completely redone by Pininfarina. Modifications included fixed headlights, replacing the pop-up versions originally installed, and a redesigned double-vane rear wing. [1] [2]

The video "Hot Metal", presented by Jeremy Clarkson (of the BBC's Top Gear) intended to support the idea that newer isn't always better, the XJ220 beat the Pagani Zonda S in a drag race. Clarkson mocked the car before the drag race, calling it "as advanced as a telegraph pole", compared to the Zonda. The XJ220 was featured alongside two other sports cars more than 10 years old at the time (episode 2, series 5, made in late 2004), the McLaren F1 and the Ferrari F40.