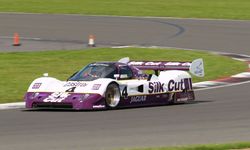 The Jaguar XJR-11 was a sports-prototype racing car introduced for the 1990 World Sportscar Championship season.

The 1990 season marked an extension to the Group C category - the FIA's new, and controversial, 3.5 litre formula had been delayed to 1991 as the championship's mandatory rules.

To take advantage of Group C's stay of execution, and in an effort to combat the dominant Mercedes-Benz team, with their C9 and C11 models, Jaguar came up with an all-new car; the XJR-11.