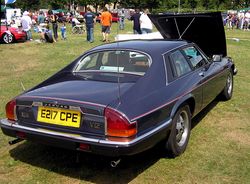 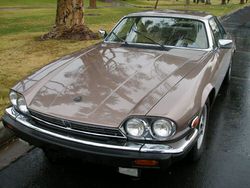 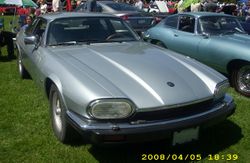 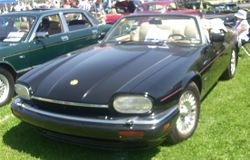 The Jaguar XJ-S (later the Jaguar XJS) is a luxury grand tourer produced by the British manufacturer Jaguar. The XJ-S replaced the legendary E-Type (or XK-E) in September 1975, and was based on the XJ saloon. It had been developed as the XK-F, though it was very different in character from its predecessor. Although it never had quite the same sporting image, the XJ-S was a competent grand tourer, and more aerodynamic than the E-Type. The last XJS was produced on 4 April 1996, with the XK8 taking its place.

The first XJ-S appeared in 1975 as a 1976 model. Power came from the Jaguar V-12 petrol engine with a choice of a manual or automatic transmission, but the manual was soon dropped. V-12 automobiles were unusual at the time, with notable others coming from Italian luxury sports car makers Lamborghini and Ferrari. The specifications of the XJ-S compared well with both Italian cars; it was able to accelerate to 60 mph (97 km/h) in 8.9 seconds and reach 142 mph (229 km/h). The first series of XJ-S cars had a Borg-Warner Model 12 transmission with a cast iron case and a bolt-on bell-housing. In 1979 GM Turbo-Hydromatic 400 transmissions were fitted. The TH400 transmission was an all aluminium alloy case with an integrated non-detachable bell-housing.

Jaguar's timing was not good; the car was launched in the wake of a fuel crisis, and the market for a 5.3-litre V12 grand tourer was very small. The styling was also the subject of criticism, including the "flying buttresses" behind the windows.

Jaguar did seize promotional opportunities with the television series The New Avengers and Return of the Saint. The New Avengers featured Mike Gambit (Gareth Hunt) who drove an XJ-S. Return of the Saint saw Simon Templar (played by Ian Ogilvy) driving an early XJ-S with the number plate "ST 1". Miniature versions were made by Corgi and proved popular. A decade and a half before, Jaguar had turned down the producers of the earlier Saint series when approached about the E-type; the producers had instead used a Volvo P1800.

Responding to criticisms that the XJ-S was not a worthy E-type successor, Pininfarina revealed a sporty show car in 1978 based on XJ-S mechanicals and called Jaguar XJSpider[2]. The car never went into production.

From July 1981, XJ-S received the new High-Efficiency engine for much better economy; as a by-product, power was increased to 220 kW (295 hp) or 196 kW (263 hp) in North America[3]. At the same time, the XJ-S received changes to its exterior and interior (new five-spoke alloy wheels, chrome inserts on the upper part of the bumpers, wood inserts on dashboard and door cappings). In 1982, the new V12 XJ-S won first and second at the RAC Tourist Trophy race at Silverstone.

In 1983, a new cabriolet version débuted with a new 3.6-litre Jaguar AJ6 engine I6, the XJ-SC. In the XJ-SC, the rear jump seats were eliminated making it only a 2-seat car. The XJ-SC was not a full convertible but had a non-removable centre targa-type structure and fixed cant rails above the doors. The rear quarter windows remained as well. With the introduction of the AJ6 engine in the XJS chassis came the availability of a 5-speed manual transmission for the 6 cylinder cars. This model with a Getrag manual transmission was not imported by Jaguar into the United states until 1994 (and then only in extremely limited numbers). A limited number of earlier 5-speed AJ6 cars did enter the US as grey market personal imports however. A V12 XJ-SC did not emerge until 1985. The two-seat XJ-SC targa-type model was replaced with a two-seat full convertible in 1988. Prior to that there was a special full convertible version called a Hess & Eisenhardt XJS offered through dealers starting in 1986. The Hess & Eisenhardt coachbuilding firm was located in Ohio and built approximately 2100 of these cars under contract from Jaguar before the official Jaguar built XJS convertible appeared in 1988 to be offered as a 1989 model.

The Hess & Eisenhardt convertible differed from the later Jaguar convertible XJS as its unpadded top folded down deeper into the body structure of the car resulting in a cleaner rear profile when the roof was lowered. In order to accommodate this design element, the Hess & Eisenhardt convertibles have two separate fuel tanks, positioned to allow for the roof to fully retract. The process of converting the stock Jaguar XJS Coupe into the H&E Convertible included the post-production removal of the roof, cutting the body in several sections, the addition of steel reinforcements behind the driver's seat, and 20 lb (9.1 kg) weights placed just behind the headlights to eliminate harmonic resonance caused by the significant modifications to the car. H&E XJS convertibles are easily identified by the lower folding top, as well as two small badges located just behind the front wheels. The later Jaguar full convertible had a heavier padded top that did not fold into as small of a bundle when in the lowered position, but retained nearly all of the original components of the Coupe.

The true number of H&E Jaguar XJSes produced varies, due in part to a fire at the Hess & Eisenhardt factory that destroyed most of the records pertaining to the Jaguar XJS conversions.

Jaguar did consider a luxury Daimler version tentatively called Daimler-S, without the flying buttresses, but this vehicle was not put into production, although one prototype was made in 1986[5]. Paul Banham did produce some custom notch back coupes without the flying buttresses, larger rear side windows, and a narrow C-pillar. In the mid nineties, Banham also made a re-worked version called the XJSS based on the XJS. This set of front and rear styling modifications was also available for a while as a DIY kit.

Throughout the life of the XJS, British company Lynx sold a high-quality four-seat full convertible conversion. Lynx also produced 67 hand-built two-door estate/shooting brake/station wagon versions of the XJS marketed under the name of "Lynx Eventer".? The Eventer was a very elegant model, which succeeded in the overall design because it removed the flying butresses, incorporating them into the estate design. Jaguar were urged to market their own version but never did. Most Eventers are believed to still exist although build quality, especially on the early versions, was at best variable.

The car was re-engineered in 1991 and renamed XJS, with a convertible waiting one year. The rear windows were enlarged, though the flying buttresses stayed, as designer Geoff Lawson argued that they were part of the car's character. The car got a new 4-litre version of the AJ6, and the V12 was upped to 6 litres in 1993/1994 (227 kW (304 hp)). At the same time the car benefited from a revision to the rear brakes, they were now fitted with outboard rear disc brakes, instead of the more complicated inboard items on previous models. With the introduction of the 6.0L V12, the transmission was also updated to a GM 4L80E with a 4th gear overdrive. These changes begin the "face-lift" for the aging XJS. A 2+2 convertible was also introduced, as was a customized insignia line. In 1994 the car received more aerodynamic front and rear bumper fascias, which completed the face-lift. 1992 and 1994 were the only years the 6 cylinder with 5 speed manual transmission XJS was exported to the United States. Exact production figures are unknown, though it is likely there are fewer than 10. In 1995 substantial revisions were made to the 4-litre AJ6 engine which became the 4.0L AJ16 with coil on plug ignition being the most noticeable change. The car was discontinued in 1996, after 21 years in production. It was replaced by the XK8.

Having been in production for over 20 years, the XJS today can vary in price from a few thousand pounds (circa $4000 - $7000) for an older coupe, to over twenty thousand (circa $38,000+) for a late V-12 Convertible. In the United States, the coupes can be had in rough shape on a regular basis for $800 - $1,000 and convertibles bring anywhere from $4,000 - $15,000 depending on year and condition. In the UK the sweet spot of the market is often considered by enthusiasts to be the mid-80's coupes. The rare 6.0L cars usually command a premium price in the US market with a 6.0L convertible bringing top dollar. While initial build quality is likely no longer a factor, the mid-eighties cars were greatly improved over the earlier models but are not nearly as expensive as the later cars. Over time, the XJS has slowly moved from "used car" status to collectible. More often than not however, these vehicles are in the hands of non-enthusiasts. Most cars on the market suffer not from mileage, but from age. Everything made of rubber is likely to have disintegrated with time if it has not already been replaced. This includes perhaps hundreds of small hoses, bushings, and seals. If these inexpensive, but time consuming to replace, parts are renewed the balance of the car is fairly indestructible. The 5.3L cars are particularly prone to fuel system fires as the rubber hoses in the high pressure fuel injection system age. Particularly the short hoses between the fuel rail and injectors seem to be a common problem area. The 6.0L cars eliminated these extra rubber hoses with modern fuel injectors without the rubber connecting hoses to the fuel rail assembly.

For 1977, the "Group44" racing team had a very successful season in Trans Am with a race car based on the actual production XJ-S chassis and running gear. The team won the series' 1977 drivers' championship cup for Bob Tullius but missed winning the manufacturer's title by 2 points (only one Jaguar was competing in the Trans-AM series compared to many more Porsche entrants). In 1978, a purpose-built tube-frame "silhouette" style XJS race car was constructed which greatly reduced the weight compared to the full production chassis car campaigned in 1977. This silhouette car had only the production car's roof panel as the sole piece of factory XJS sheetmetal on the car. Group 44 succeeded in again capturing the driver's championship for Bob Tullias and also captured the manufacturer's title as well, by entering Brian Fuerstenau driving the 1977 car at some venues to gain additional manufacturer's point for Jaguar. The silhouette car survived and has surfaced recently in the SVRA historic sports race series. The 1977 factory chassis race car is believed to still be in the hands of Group 44's Bob Tullius.

In 1984 Tom Walkinshaw captured the Drivers’ title of the European Touring Car Championship with a Group A version of the XJ-S, entered by TWR. During the championship season the TWR team had also won the Spa 24 Hours race with an XJ-S driven by Tom Walkinshaw, Hans Heyer and Win Percy.

In 1985, XJ-S drivers John Goss and Armin Hahne won the James-Hardie 1000 for Group A Touring Cars at Bathurst, New South Wales in Australia.

The XJ-S has been featured on BBC's Top Gear television series several times: