The Jaguar XK series (XK8 and XKR) is a grand tourer produced by British carmaker Jaguar since 1996. The car was introduced in Geneva Motor Show on March 5th 1996. It is the replacement of the XJS, and is available as a coupé and convertible. Currently in its second generation, the XK8 was the first 8 cylinder vehicle produced by Jaguar, when the Jaguar AJ-V8 engine was introduced. 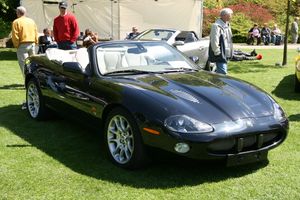 The 1997 XK8 (project code X100) was available in coupé or convertible body styles and with either a supercharged 370 hp (276 kW) or naturally aspirated 290 hp (216 kW) engine. The supercharged variant is known as the XKR. The first-generation XK series shares its platform with the Aston Martin DB7. Both cars are derived from the Jaguar XJS, though the platform has been extensively changed, with co-efficient drags of 0.35 and 0.36 for the XK8 coupe and XK8 convertible respectively.

Both the XK8 and XKR are electronically limited to a maximum of 155 mph (250 km/h), lower than the top speed of its predecessor. The XK8 heralded a change in direction for the company, resulting in the S-Type and X-Type.

Both the XK8 and XKR come standard with 18-inch alloy wheels, and 19 and 20-inch wheels are available for additional cost. A navigation system and self-leveling xenon headlamps come standard with the XKR and as options for the XK8. Jaguar's Adaptive Cruise Control is an optional feature available on both models. Both come with all-leather interior, burl walnut trim, and side airbags. Jeremy Clarkson, during a Top Gear (a UK motoring magazine/TV show) test-drive, likened the interior of the original XK8 to sitting inside Blenheim Palace. In 2005 the grille design of the XKR was refreshed.

Only 600 Silverstones were made, in celebration of Jaguar's return to F1 racing in 2001. It featured a Platinum paint finish, high-performance package (with the same engine as the standard XKR, but improved transmission, suspension and brakes), 20" Silver BBS "Detroit" wheels and a custom interior.

Built to celebrate the centenary of Jaguar's founder, 500 'XKR 100' coupés and 500 convertibles were made in 2002.[1] The XKR 100 featured an Anthracite paint finish, Recaro seats, 20-inch BBS alloys, Brembo brakes, and custom interior. This model may be referred to as the XKR-R as well.

The convertible-only Portfolios were produced in 2004 exclusively for the US market. Of the Portfolio models, 100 featured unique Red paint with matching Recaro sports seats and interior, whilst the remaining 100 had Blue paintwork and interiors.

There is also a 2008 Portfolio model planned which will be available worldwide, featuring the most powerful brakes featured on any production-line Jaguar.

In Europe the 4.2-S was unveiled at Geneva on March 1, 2005. This was the last XK to be rolled out that was based upon the original 1996 design. Features for the 4.2-S Four included new exterior and interior colours and two distinct veneer options for the instrument panel, polished door treadplates with chequered-flag emblems and embossed, leather-edged floor mats. The revised white Jaguar badge on the bonnet also feature chequered accents. New 19" Atlas wheels plus cross-drilled Brembo brake discs, red wheel badges and red brake calipers were also fitted.[2] 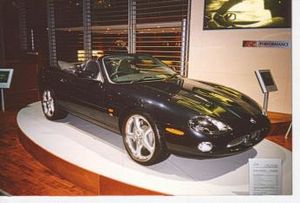 Jaguar also produced a concept car called the XKR-R which was very similar to the production XKR, but boasting a more powerful 450 bhp (340 kW) engine, a manual gearbox, a limited-slip differential and improved handling. The naming convention is similar to that of the S-Type R special edition. Unlike the S-Type R, it will never be realised on a Mk.1 XK chassis although a model of the same name could appear on the Mk.2 XK later this year.

Jaguar unveiled an all-new 2006 car (project code X150), called simply the "XK", at the Frankfurt Motor Show in September 2005. It uses the new all-aluminium monocoque chassis developed from the 2005 Advanced Lightweight Coupé (ALC) concept car and is offered as both a coupé or convertible.

In the opposite manner to the way convertibles are traditionally designed, the coupé is based on the convertible. This meant that the engineers could design the convertible without the drawbacks of the car looking like, and actually being, a coupé with the top chopped off. It also meant that minimal additional weight was required to maintain the structural rigidity lost with the removal of the roof (1,635 kg (3,600 lb) curb weight for the convertible versus 1,595 kg (3,520 lb) for the coupé).[3] This makes the XK convertible exceptionally rigid and lightweight for a car of its type, offering an extremely impressive driving experience.

The XK convertible was introduced at the 2006 North American International Auto Show in Detroit. It features a conventional cloth top that will open or close in 18 seconds.

The new XK closely resembles the ALC Coupe concept which was first seen at the 2005 North American International Auto Show. The designer, Ian Callum, was also responsible for the Aston Martin DB7 and Vanquish coupés, which explains the similarities in design among the three cars.

The new XK's grille is inspired by that of the 1961 Jaguar E-Type.

The XK features an advanced paddleshift gearbox that enables the driver to either use it as one would a standard automatic gearbox, or an automatic gearbox featuring faster shifts by using the sport mode. Alternatively, the driver can take full manual control of the gears by means of two paddles situated behind the steering wheel, affording the driver optimum control in fast driving.

Jaguar's innovation is to have sensors in the front bumper that determine if a pedestrian has indeed been struck and this then triggers two pyrotechnical charges that instantaneously lift the bonnet, providing extra distance between engine and head. The hood's sheet metal cushions the impact better than the solid engine block.

This device has awarded the all-new Jaguar XK the Engineering and Technology Award at the prestigious Prince Michael International Road Safety Awards in London.[5]

Based on the XKR, the XKR-S is the fastest production XK to date. With recalibrated engine management, the XKR-S reaches an electronically limited top speed of 174mph (280kph) – 19mph (30kph) faster than the XKR. This additional performance is made accessible by improved aerodynamics (reduced drag and lift) and suspension set-up.

The high performance braking system for the XKR-S was developed by Jaguar’s Special Vehicles team in partnership with British competition brake specialist Alcon.

The limited edition coupé is identified by the unique XKR-S badge on the rear of the car. The exterior of the XKR-S has been subtly enhanced to make it recognizably different without being overstated. Another significant element in the revised handling package is that the ride height of the XKR-S has been reduced by 10mm compared with that of the XKR.[7]

To celebrate the 60th anniversary of the launch of the XK120, Jaguar is launching a special series of the current XK for the UK market – the aptly named XK60.

XK60s will be built from July 2008 and include 20-inch Senta alloy wheels, a sporty alloy gear knob and selector-gate surround, plus distinctive body enhancements: a new front spoiler and rear valance panel, chrome-finished side vents and bright upper and lower front grille meshes, special tailpipe finishers and appliqués on both sides of the car.[8]