The XK120 was launched in roadster form at the 1948 London Motor Show as a testbed and show car for the new Jaguar XK engine. It caused a sensation, which persuaded William Lyons to put it into production.

The "120" in its name referred to its 120 mph (193 km/h) top speed (faster with the windscreen removed), which made the XK120 the world's fastest standard production car at the time of its launch.[3].

It was available in two convertible versions — first as the roadster (designated OTS, for open two-seater, in America), then also as a drophead coupé, or DHC, from 1953 — and as a closed, or "fixed-head" coupé (FHC) from 1951.

The roadster version was popular with Hollywood stars such as Humphrey Bogart, Ingrid Bergman, Clark Gable and Lauren Bacall. 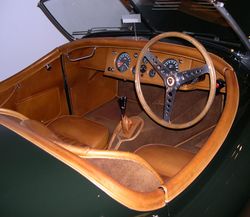 Ex-Biondetti roadster has competition seats and aftermarket steering wheel; positions of tachometer and speedometer have been reversed

The first 242 cars, all 1949-model roadsters hand-built in late 1948, had aluminium bodies on ash frames. To meet demand it was necessary for the mass-production versions, beginning with the 1950 model year, to have pressed-steel bodies. They retained aluminium doors, bonnet, and boot lid.

With alloy cylinder head and twin side draft SU carburetors, the dual overhead-cam 3.4 L straight-6 XK engine was comparatively advanced for a mass-produced unit of the time. With standard 8:1 compression ratio it developed 160 bhp (119 kW). [2] A 7:1 low compression version was also available to cope with low quality fuel. This same basic design of the XK engine, later modified into 3.8L and 4.2L versions, survived into the late 1980s.

All XK120s had independent torsion bar front suspension, semi-elliptic leaf springs at the rear, recirculating-ball steering, telescopically adjustable steering column, and all-round drum brakes that were prone to fade. The roadster's lightweight canvas top and detachable sidescreens stowed out of sight behind the seats, and its barchetta-style doors had no external handles; instead there was an interior pull-cord which was accessible through a flap in the sidescreens when the weather equipment was in place. The windscreen could be removed for aeroscreens to be fitted.

The drophead coupé had a padded canvas top, which folded onto the rear deck behind the seats when not in use, and roll-up windows. The windscreen was fixed. Dashboards in both the FHC and DHC were wood-veneered, whereas the roadster's was leather-trimmed. All models had removable spats ("fender skirts" in America) covering the rear wheel arches, which enhanced the streamlined look. On cars fitted with optional centre-lock wire wheels (available from 1951), the spats were omitted as they gave insufficient clearance for the two-eared Rudge-Whitworth knockoff hubs.

In addition to wire wheels, upgrades on the Special Equipment, or SE, version (called the M version in the United States) included increased power, stiffer suspension and dual exhaust system.

In May 1949 Jaguar demonstrated an XK120 roadster to the press on the high-speed autoroute between Jabbeke and Aeltre in Belgium. The road was closed for the occasion. The white left-hand drive car, chassis number 670002, was the second XK120 built. Jaguar's development engineer Walter Hassan was to have driven but fell ill, so Jaguar test-driver Ron "Soapy" Sutton substituted for him. With hood and sidescreens erected, and the airflow under the car improved by the addition of a full-length aluminium undertray, the Jaguar was timed through the flying mile by the Royal Automobile Club of Belgium at 126.448 mph (203.498 km/h). With hood, sidescreens and windscreen removed, a metal airflow deflector fitted in front of the driver, and a tonneau cover fastened over the passenger side of the cockpit the speed improved to 136.596 mph (219.830 km/h), making the XK120 the world's fastest production car.

XK120s were active in racing and rallying:

A 1953 fixed-head coupé with steel wheels and spats