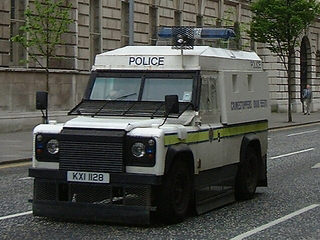 The Land Rover Tangi is an armoured car used in Northern Ireland. They were used by the Royal Ulster Constabulary (RUC) and currently by the Police Service of Northern Ireland (PSNI).

The creation of the vehicle was made with input from the RUC's engineering team[1].

Based on the Land Rover, the Tangi can trace it roots back to the Shorland armoured car. After the 1970s, it was decided that the Shorland with its machine gun turret was too provocative for long-term use on the streets of Belfast, as it was originally designed for patrolling the border for smugglers. So armoured Land Rovers based on the Series 3 109 Model were used, called the Simba. They were fitted with amoured hulls, skirts to prevent explosive devices being rolled under the vehicle in riot situations and grills over all lights and windows to prevent missile damage. Over the years with the need for increased protection the design was evolved using the new Land Rover Defender 110 Chassis. Changes included a reinforced double roof following experiences were vehicles were attacked with IEDs dropped from the upper stories of urban buildings. The latest evolution of the design is the current Land Rover Tangi.

Known locally as a "meat wagon" or a '"Newry Ice-cream van", the vehicles are synonymous with Northern Ireland's Troubles. At the height of the Troubles the vehicles were essential for patrolling across Northern Ireland, carrying two police officers in the front and a maximum of five riot equipped officers in the rear. At this time they were painted battleship grey. A number of people were killed after being hit by the vehicles during the Troubles, usually in riot situations.[2]

Since the Good Friday Agreement and the resulting peace, the vehicles are largely used for crowd control, particularly during contested Orange Order parades. They are also used as arrest wagons. It is not uncommon to see the Police patrolling Belfast City Centre in them, on call to deal with any shoplifters they may be required to deal with and transport to the nearest Police Station. The vehicles are now painted in standard white, yellow and blue Battenburg markings, as seen on the majority of police vehicles throughout the United Kingdom. The original rotating blue beacons have been replaced with full light bars.

More than half of the former RUC (now PSNI) fleet of 450 armoured Land Rovers were decommissioned under the terms of the Good Friday Agreement - a number came back to Great Britain to be refurbished and distributed among UK forces. For instance, they are now in use with the West Yorkshire and North Wales police services.[3][4]

The vehicle has become popular with collectors. Diecast models and artwork of the vehicles are available.