The Lincoln LS was a mid-size, rear wheel drive sedan from Lincoln — based on the Ford DEW98 platform shared with the Jaguar S-Type and, later, the Ford Thunderbird. LS versions were originally to be called LS6 and LS8 depending on engine choice, but those designations were replaced with "LS V6" and "LS V8" upon threat of a trademark infringement lawsuit by Toyota in relation to its Lexus LS.

The LS was introduced in early 1999 as a 2000 model year vehicle, in part as a successor to the Lincoln Mark VIII coupe that was discontinued after 1998. It was the first Lincoln in decades to offer an optional manual transmission. With its available V8 power, rear wheel drive, and near 50/50 weight distribution, the LS was an attractive alternative to European and Japanese luxury sports sedans.

Production of the LS ended on April 3, 2006. All Lincoln LS models were manufactured at Ford's Wixom Assembly Plant which was idled in 2007, as part of The Way Forward. About 262,900 LS models were built. [1]

In 1999 the LS debuted as Lincoln's first rear-wheel drive sport luxury sedan for the 2000 model year. The LS was devised to appeal to a younger generation of luxury car buyers not common to Lincoln as well as to those who would have normally chosen auto manufacturers such as BMW or Mercedes-Benz for a luxury sport sedan. Though related to the Jaguar S-Type, which was introduced the same year, the LS was distinctive in style and content due to the fact that the S-Type and LS each had their own design teams. In designing the LS to be competitive in its segment, Helmuth Schrader, the LS' German-born chief designer, said of the car, "In a segment defined and dominated by BMW and Mercedes, the car had to have a functional, no-nonsense look. This redefines the Lincoln brand, but we still had to make sure it was recognizable as a member of the same family as the Town Car, Continental, and especially the Navigator."[2] Heeding this insight, the LS featured an understated, well-proportioned exterior design with squared-off edges (relative to the S-Type), including trapezoidal headlight housings and rectangular fog lights. The body was tightly sculpted with short front and rear overhangs to emphasize an athletic appearance while well-rounded wheel housings were intentionally made small to suggest that the car's wheels were larger than their actual size. The greenhouse of the LS offered spacious headroom and was accentuated by a smoothly arched roofline. Completing the exterior were subtle chrome accents on the front and rear fascias and Lincoln's signature waterfall grille. 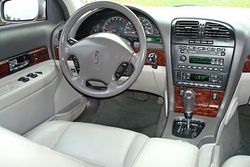 Instrument panel and dash area of a 2002 Lincoln LS. Other model years are similar.

Relative to the exterior, the interior of the LS bore a stronger resemblance to its S-Type cousin with a similar dashboard layout, gauges, and controls. This said, the interior of the LS was simple, straightforward, and comfortable. Large gauges were designed to convey sportiness while other controls, such as audio and climate controls, were positioned in the car's center stack for convenience to both the driver and the front passenger. The steering wheel could be wood- and leather-wrapped while wood accents continued around the interior on the door panels and dashboard area. Leather seating surfaces were standard and the front power bucket seats were bolstered for a firm feel like the LS' European competitors. Other standard interior features included power windows, power door locks with keyless entry, power heated mirrors, automatic headlights, air conditioning with automatic climate control, cruise control, and an AM/FM cassette radio. Some of the available options included a six-disc in-dash CD changer (only accessible through the glove box initially; changed on later models), a power moonroof, and a universal garage door opener.

As mentioned above, the Lincoln LS shared a platform and equipment with the Jaguar S-Type. The DEW98 platform that the cars were based on was a rigid chassis that featured independent double wishbone (short-long arm; SLA) front and rear suspensions for excellent handling and ride quality. Enhancing ride quality further as well as increasing interior space was the LS' large 114.5-inch (2,910 mm) wheelbase. Four-wheel antilock disc brakes were standard while Ford's AdvanceTrac traction control system was available as an option for improved driving control. A number of suspension components as well as the hood, decklid, and front fenders used aluminum to save weight. The LS came with standard 16 inch alloy wheels while 17 inch wheels were available through an optional sport package. The battery of the LS was positioned in the spare tire well inside the car's trunk because there was too little room for it in the engine bay. However, moving the heavy battery and its interconnecting cables to the rear of the vehicle contributed to its near-50/50 weigh distribution.

The base LS was powered by an all-aluminum 3.0 L DOHC V6 that was a variant of the Ford Duratec 30 engine. Optional in the LS was an all-aluminum 3.9 L DOHC V8, a de-bored variant of the Jaguar 4.0 L AJ-26 V8. Both engines required premium-grade gasoline for optimum performance. Ford's 5R55S 5-speed automatic transmission with an optional manual shift ability called SelectShift was standard with either engine while a Getrag-designed 5-speed manual transmission was available for V6-equipped LS models through an optional sport package. Automatic transmission-equipped LS' featured a 3.58:1 rear axle ratio while manual transmission-equipped versions came with a 3.07:1 rear axle ratio. The available manual transmission made the LS the first Lincoln since the 1951 Cosmopolitan to have this option. In spite of this, Lincoln stopped production of the manual transmission model LS after 2002 due to low sales figures; only 2,331 were produced. Road tests by Motor Trend and Car and Driver found that a V8-equipped LS could accelerate from zero to 60 mph (97 km/h) in the low seven second range while V6 models were up to two seconds slower in the same test.

The powertrain control module in 2000-2002 automatic transmission models with the SelectShift option originally would not allow the car to start in first gear when shifting manually (the car started in 2nd gear). It would quickly shift to first gear however if the throttle was depressed more than 60%. Second-gear starts were programmed in order to meet fuel economy regulations as required by the U.S. Environmental Protection Agency. This was changed in 2003 when the regulations were amended and first-gear starts were permitted.

In 2002, the LSE (Limited Special Edition) package was introduced in V6 and V8 versions, with a revised fascia including round fog lamp openings and a special metallic grille treatment, and with enlarged lower body rocker panels, special wheels, and twin-dual exhaust tailpipes. Also for 2002, V6-equipped LS models gained 10 hp (7.5 kW) and 10 lb·ft (14 N·m) of torque.

The Lincoln LS received its first, and only, major refresh for 2003, coinciding with Lincoln's then-new "Travel Well" ad campaign. The exterior received a slight facelift, with HID headlamps, and a revised trunklid with new taillights. For the powertrains, both available engines received a boost in power and torque as well as slightly improved fuel efficiency. The 3.0 L DOHC V6 that the LS was introduced with now featured continuously variable intake cam timing, improved variable-length intake runners, and electronic "drive-by-wire" throttle control (which replaced the traditional mechanical cable-linked throttle control system used previously). The optional 3.9 L DOHC V8 that the LS was also introduced with received variable intake valve timing.[3] Thanks to its upgraded design, the 3.9 L V8 now produced over 87% of its peak torque output at only 2000 rpm and LS' equipped with the V8 could now accelerate from zero to 60 mph (97 km/h) in under 6.5 seconds.[4] Other notable additions to the LS included an electronic push-button parking brake (similar to that of the BMW E65 7 Series), replacing the traditional center console mounted hand lever (or foot pedal), a touch-screen DVD satellite navigation map system, and an industry-first, 10-speaker THX-certified sound system. Limited Special Edition (LSE) versions were also available in the 2004 and 2005 model years, with unique fascias, unique 17-inch wheels, all-red tail lights, a color-keyed grille, unique floormats, and additional wood paneling in the interior.[5] 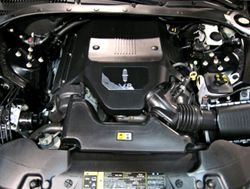 Earlier LS models had a mechanical engine cooling fan that was operated with a hydraulic clutch because the electrical charging system did not have sufficient capacity to effectively power an electric fan. Later on, thanks to an improved alternator design, the fan was changed to an electric version for the 2003-2006 models.

The 2003-2006 GPS navigation system uses a DVD player mounted in the trunk (under the package tray) to contain the map data.

For the 2006 model year, the LS received a minor facelift, which resembled the LSE fascia and body treatments used in previous model years. The V6-powered model was dropped from the lineup due to poor sales volume and as a part of Ford's plan to discontinue the LS altogether. As a result of this change in the lineup, the base MSRP for the Lincoln LS increased from roughly $32,000 in 2004 to $39,945, moving the LS from the entry-level luxury segment into the mid-luxury segment.

In spite of Ford's initial success with the LS, a lack of meaningful updates to the car prevented it from staying competitive and, ultimately, caused sales to plummet. The LS went from a peak of over 51,000 cars sold in 2000 to less than 9,000 sold in 2006.[6] Given this situation and Ford having no interest in further investments into the LS in favor of other products for Lincoln, production of the Lincoln LS at the Wixom Assembly Plant was ended in April of 2006.[7] The Wixom plant itself was idled a year later. The de facto replacements for LS were two new all wheel drive-capable sedans, the Lincoln Zephyr/MKZ and, later, the Lincoln MKS.[8].

The Lincoln LS has received very high marks in occupant protection. The Insurance Institute for Highway Safety has rated the LS as a "Best Pick" with a perfect score in their frontal offset crash test. The National Highway Traffic Safety Administration gave the LS almost perfect scores in its side impact and rollover tests. In fact, CNBC rated the LS as “one of the five safest cars of all time.”

Lincoln originally intended to designate LS models as "LS6" and "LS8", depending on the engine size option. Toyota threatened a trademark infringement lawsuit, due to the similar naming scheme used on the Lexus LS, while at the same time, Ford threatened a lawsuit regarding the Toyota T150 concept, arguing that the name was too close to that of the F150. Lincoln settled on designating the cars as "LS V6" and "LS V8" and Toyota changed the name of their pickup truck to the Tundra.