The Mazda Atenza or Mazda 6 is a mid-size car produced by the Japanese car manufacturer Mazda since 2002. The name Atenza is used only in Japan with the Mazda 6 moniker used everywhere else in the world. The Atenza/Mazda 6 replaced the Capella/626, and has sold over one million units worldwide since its introduction, hitting that sales milestone faster than previous Mazdas.[1]

The model lineup consists of a four-door sedan, a five-door liftback and a five-door station wagon, marketed in North America as the "Sport Sedan", "5-Door" and "Sport Wagon", respectively. In Australia, the lineup starts with Limited, available only as a sedan. Then comes the Classic, available in sedan, hatch or wagon. The Luxury model is next available in sedan and hatch versions. Topping the range is the Luxury Sports model, available only as a hatch. When it arrived in North America, it was first sold as a 2003 model in the United States and as a 2004 model in Canada. In Europe, the luxury sports model was available as a 136 hp (101 kW) direct injection turbodiesel ("DITD") station wagon up until 2007. As of 2008, the European Mazda catalog lists only the "Sport" version of the 146 hp (109 kW) turbodiesel station wagon, while the "Luxury Sport" version has been dropped.

Drivetrain combinations include the Mazda MZR engine in configurations of 1.8 L(L8 European Model), 2.0 L(LF European Model) and 2.3 L(L3 European Model), initially with a five-speed manual or four-speed automatic transmission (with sequential-automatic option, dubbed the "Four-Speed Sport AT"). In the US domestic market a 3.0 L Duratec 30 V6 engine is also available with a five-speed manual or five-speed automatic (with sequential-automatic option, dubbed the "5-Speed Sport AT"). European and Australian versions also feature a four-cylinder turbodiesel that comes with a six-speed manual transmission and produces significantly more torque than the V6 with much improved fuel economy.

In North America, the 5-speed automatic optional on the V6 models is replaced by a 6-speed automatic from Ford for 2005 model year. The four-cylinder model receives a five-speed automatic in the following year. Power is directed to the front wheels only in most markets, although full-time all wheel drive models are available in Japan, Europe and Australia. Not all configurations are available in all areas - for example, the Mazda 6 as released in Australia is available in 2.3L four-cylinder guise only, while the 626 which it replaced was available with a choice of four or six-cylinder engines. This was due to the Australian Mazda6 being sourced from Japan where the V6 engine was not available. The Duratec 30 V6 engine fitted to vehicles manufactured at Flat Rock, Michigan is only available in the US and Canadian domestic markets.

Like the 626 before it, Ford is using the Atenza's CD3 platform as the basis for a number of other vehicles, including the Ford Fusion, Mercury Milan, Lincoln Zephyr/MKZ, Lincoln MKX, and a range of SUVs and minivans. Ford also plans to offer a hybrid powertrain on the platform. For its part, Mazda themselves refer to this chassis as either the GG (sedan/hatch) or GY (wagon) series - following the previous 626/Capella in its GF/GW series.

North American Mazda 6 production is handled at the AutoAlliance International plant which is a joint venture between Ford and Mazda. The first Mazda 6 rolled off this Flat Rock, Michigan assembly line on October 1, 2002, one month after 626 production ended. Hofu plants in Hiroshima produce the Mazda 6 for Europe and some Asian markets, including Australia. There are also satellite plants building Mazda 6 models in China and Thailand for their respective local markets. (Ford owns a controlling interest in Mazda.)

In China, the Mazda Atenza is used as the base for the FAW Benteng, also known as Besturn or Hongqi C301, manufactured by the First Automobile Works in Jilin Province. 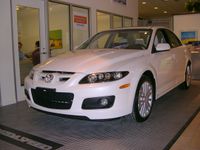 The 2006 Mazdaspeed Atenza (known as MAZDASPEED6 in North America and Mazda 6 MPS in Europe and Australia) is a high-performance version of the Mazda 6. It features a turbocharged version of the 2.3 L MZR I4 which produces 272 PS (200 kW) (European version is detuned to 260 PS (191 kW); the North American version, at 274 hp (204 kW), revised to 270 hp (200 kW) for 2007). All models have 280 lb·ft (380 N·m) of torque. This 2.3 L DISI turbocharged engine features direct fuel injection and conforms to the new Euro 5 emissions standards. It has a revised front fascia with a raised hood, a 6-speed transmission, and four-wheel drive. The all wheel drive system uses Mazda's Active Torque Split computer-based control which routes up to 50% of the power to the rear wheels depending on driving conditions. The Mazdaspeed Atenza competed with the Subaru Legacy GT and less directly with the compact Subaru Impreza WRX STi and Mitsubishi Lancer Evolution.

Originally scheduled to be launched in June 2005, the Mazdaspeed Atenza was delayed until November. In North America, the MAZDASPEED 6 comes in two trim levels; the "Sport" trim with cloth interior and standard key entry and ignition; and the "Grand Touring" trim with leather interior, keyless entry/ignition, and an optional DVD navigation. Automatic climate control is standard, as is a 200 W Bose stereo system featuring seven speakers and a 9 inch subwoofer in addition to an in-dash six-disc CD changer. A sunroof with moonroof feature is optional on the Grand Touring trim.

Car and Driver magazine has achieved a 0-60 mph time of 5.4 seconds for this vehicle.

The Mazda 6 was praised for its edgy handsome design, communicative steering and tight suspension. However, as it was designed as a world car in order to fit the needs of Europe and Japan, it was smaller than its North American contemporaries in the midsize segment, being criticized for its reduced passenger space. Its acceleration, particularly the V6 engine models, lagged behind that of its rivals as well. [4]

As one of the few midsize vehicles to offer a wagon and hatchback, these models retained the good driving characteristics of the sedan while providing additional cargo versatility. The hatchback's liftback/notchback styling was considered a clever design to disguise it as a four-door sedan, as North Americans generally considered trunks more elegant than hatches. The wagon had an early demise but the hatchback was somewhat successful in Canada, especially in Quebec, though it would not have a 2009 refresh, as both models were unpopular in the US. [5]

The Mazda6 second generation made its premiere at the Frankfurt Auto Show in September 2007.[6][7] The US version will be redesigned for the 2009 model year, which will be a larger car than the models offered in other markets. Mazda followed Honda's strategy in offering a larger sedan in America compared to the European version, and the company believes the new car will strengthen the brand significantly. Reviewers have noted its coupe-like roofline and sportier style.[8][9][10][11] Engine choices include a new 2.5 liter 4-cylinder and North American versions get the 3.7 liter V6 which is also available in the Mazda CX-9.[12]

The new Atenza is still based on the Ford CD3 platform and continues to provide three bodies, including 4-door saloon (sedan), 5-door hatchback and wagon. Despite its increase in dimensions, weight is not increased significantly and therefore the same overall driving experience is generally maintained. A number of journalists have already praised its electrically assisted steering for being considerably improved compared to the last generation, providing more feedback to the driver. The hatchback model even has a boot space which beats the larger rival Ford Mondeo (hatchback) by 200 liters with rear seats folded down. For the US and Canadian market, only a sedan model will be available. In the North American market, the Mazda 6 will be positioned against the Honda Accord and Toyota Camry. Early reviews have been favorable.[13]

The Mazda 6 is currently used in the Speed World Challenge Touring Car class. This year, they are currently 2nd in the manufacturer's championship with 46 points, with Acura as the only other brand in the standings.[14] In 2007, Mazda won its first manufacturers championship in the class.[15]

The Mazda 6 is also used in the KONI Challenge Series Sport Touring class. It is currently used by the Baglieracing team with Dennis Baglier, Chris Gleason, and Marty Luffy as drivers.[16]