The Mazda Axela is a compact car manufactured by the Mazda Motor Corporation in Japan. Outside of its home market, it is marketed as the Mazda3. The Axela was introduced for the 2004 model year, replacing the Mazda Familia (323 or Protegé in export markets). A more performance-oriented version of the Mazda3 is marketed as Mazdaspeed3 in North America and Mazda3 MPS in Europe.

The Mazda3 has been generally well-received by the automotive press.[1][2][3] In 2006 the 3 was the second best-selling car in Canada and the best selling car in Israel during 2005-2007. Mazda is increasing production of the 3 at its Hofu 1 and 2 factories to meet heavy worldwide demand of over 300,000 units per year.

The Axela is based on Ford's global C1 platform, which was developed by Mazda, Volvo and Ford and is shared with the latest European Ford Focus and Volvo S40. Based on the styling of the MX-Sportif concept car, the Axela is available in two body styles, a four-door sedan, marketed as "coupé style" in Europe, and a five-door hatchback, branded the Sport version in Canada, Japan, and the United States.

Front suspension is by MacPherson struts, with coil springs and an anti-roll bar. Rear suspension is a Ford-designed "E-link" multi-link suspension, with four locating links per wheel and an anti-roll bar, suspended on coil springs that are mounted inboard of the shock absorbers to reduce suspension intrusion into the cargo area. Disc brakes are standard at all four wheels, with 300 mm (11.8 in) discs front and 279 mm (11 in) discs rear; ABS and electronic brake force distribution are available or standard, depending on the model. Wheel and tire sizes vary with model, from 15 in on base models to option 17 in wheels on upper-level models. 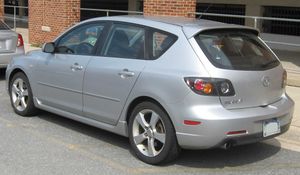 When first introduced, United States-market Mazda3 models were available in only two trim levels, i and s, with the 2.0 L and 2.3 L engines, respectively. Since then Mazda has introduced a proliferation of additional models under the Touring and Grand Touring labels. British Mazda3s are offered in S, TS, TS2, Sport, and a top end 2.3ltr turbocharged Mazda3 MPS (Mazda Performance Series) models. Since April 2008, when there was a mainly cosmetic facelift of the Mazda3, there have been some changes to the trim designations for UK cars, with the models now being the entry level S, then Takara (which replaces TS), the Tamara Special Edition and the Sport and MPS as before.

All 3 models use the inline-4 Mazda MZR engine, with various types, displacements and outputs including the MZ-CD turbodiesel, depending on model and market. Transmissions are a five-speed manual transmission and a four-speed automatic transmission; since the 2006 model year, a five-speed automatic is optional on models with the 2.3 L engine. This transmission has now been made standard on the 2.0 L engine in Japan (FWD models only), as part of a minor facelift in early 2008 which includes different front/rear bumper designs, new wheel designs and bodycolors, stiffened chassis, and better interior materials. The MPS / Mazdaspeed version is only available with a six-speed manual.

The 3 uses the following engines:

The 0 to 60 mph (97 km/h) or 0 to 100 km/h acceleration times depend on the type of transmission, engine and other options that add weight to the car. Generally a vehicle with a manual transmission accelerates faster because it is lighter and its clutch transmits power more efficiently than the torque converter in an automatic transmission.

The Mazdaspeed3 is a high-performance car based on the standard Mazda3. This model was first displayed at the 2006 Geneva Motor Show. This model was introduced in the North American market in 2007. In Japan this model is named the Mazdaspeed Axela and in the EU market the Mazda3 MPS. The Mazdaspeed3 competes with the latest generation of hot hatches and sport compacts. The car is powered by the MZR 2.3L DISI Turbo 4 cylinder engine, has a 6 speed manual transmission, limited slip differential, upgraded brakes, suspension, tires, chassis and other performance enhancements.

For the 2006 model year, Mazda added variable valve timing and variable-length intake runners to the 2.0 L engine resulting in a power increase to 150 bhp (112 kW; 152 PS). The automatic transmission used in Mazda3 s trim with the 2.3 L engine was changed from a four-speed to a five-speed design. The larger engine, the 2.3 L, was PZEV-certified (Partial Zero Emissions Vehicle) for vehicles sold in California and other states that have adopted California automotive emission standards. The 2.0 L engine had already been PZEV-certified. The colour palette was also simplified in 2006, with the deletion of Canary Yellow.

The 3 received a minor cosmetic facelift for the 2007 model year with minimal exterior, interior and mechanical changes. On base models, the black plastic at the top of the grille became body-coloured. The front fascia and bumper were changed with a floating foglight design and the lower air intake opening was reshaped to better resemble the typical "Mazda five-point face." All Mazda3 sedans and five-doors gained the same "Altezza" clear-lens style rear tail-lights as the SP23 model, and also featured LED brake lights. The LED brake lights were added to compete with the growing trend of higher-end vehicles using LED tail lamps for more visible light output. The range of alloy wheels were redesigned. The rear fascia was slightly changed adding a notch on the bumper cover of the sedan. Several new exterior colors were added, a lighter shade of blue, a copper red metallic (April 2008), a dark blue called Stormy Blue and a purple color. The Titanium Gray color was replaced with a darker Galaxy Gray color.

The interior of the Mazda3 was offered with several new color choices and an audio jack in the center console, allowing the use of digital music players. Also, Takara models, which were introduced in the 2008 upgrade, added climate control and 6 cd autochanger to the TS specification.

The 2007 model also includes less visible mechanical changes. The keyless entry system was improved. Reinforcements to the body shell improve overall chassis rigidity. The front dampers of the MacPherson strut suspension have been re-tuned to quicken steering response and reduce understeer. The hydraulic dampers of the multi-link rear suspension were also re-tuned to match the front suspension changes. Mazda engineers and designers addressed concerns regarding cabin noise level by redesigning or changing multiple systems and adding sound-deadening material to the roof lining and hood panel.[4]

The bumper-to-bumper warranty was reduced to 36 months / 36,000 miles while the powertrain warranty was increased to 60 months / 60,000 miles in most markets. In the UK all Mazda3's have a 3 year unlimited mileage warranty as standard.

In October 2008 Mazda released pictures and video showing the next generation design of the Mazda3. Mazda has restyled the exterior to reflect its current design language, and incorporated LED tail lamps and a dual exhaust. The trim with the larger engine will use a 2.5L straight-4 shared with the second-generation Mazda6, while the less powerful trim will continue with the same 2.0L engine.[6]

Mazda has not confirmed if the new design is based on the current C1 platform, the EUCD, or the CD3 platform. The new model is expected to be wider, longer and lighter than the current Mazda3. The North American market's base 2.0L engine is expected to receive a modest boost in power. The 2.3L engine will be replaced with a 2.5L engine that should produce at least 170 bhp (127 kW; 172 PS). In other continents it is also expected to receive a 2.2L turbodiesel engine.[7] Car and Driver had earlier mentioned a possible 1.6L rotary engine; it remains unclear if that will materialize.[8]

Mazda unveiled the 2010 Mazda3 sedan at the Los Angeles Auto Show on November 19, 2008. The new Mazda3 is slightly larger than the old Mazda3, and is available in "i" and "s" versions. The "i" is powered by a 148 horsepower (110 kW) 2.0L engine while the "s" is powered by a 167 horsepower (125 kW) 2.5L engine adapted from the Mazda6.[9] Both engines are also available in PZEV versions, the 2.0 producing 144 hp (107 kW) and the 2.5 producing 165 hp.[10] The 3s Grand Touring model includes leather seats, power driver's seat with memory, rain-sensing windshield wipers, dual-zone automatic climate control, and steerable active bi-xenon headlights as standard equipment.[9]

Laurens van den Acker, the chief designer at Mazda, talked about the 2010 Mazda3 exterior and interior at the 2008 Los Angeles auto show.[11]