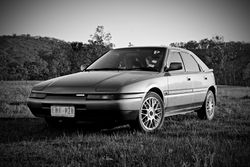 The Mazda Familia Astina was Mazda's sportier five-door fastback version of the well established Familia. It was sold in export markets (where the Familia was known as the 323) as the Mazda 323F or Mazda 323 Astina, and luxury versions were sold as the Eunos 100 in Japan. The car was produced from 1989 until 1994 when it was superseded by the Lantis. It featured pop-up headlights, a much sportier looking fastback body and a choice of 1.5, 1.6, and 1.8 litre 4-cylinder engines depending on the year, and place of purchase. The car mainly used fuel injected DOHC versions of these engines, however there were also carbureted SOHC versions available for the 1.5 and 1.6 litre engines. Unlike the standard Familia saloons and three-door hatchback, the Astina never came from the factory with the 1.8 litre turbo "GTX" spec engine or four wheel drive system.

From 1992 on, the model had a catalytic converter.

Taillight arrangements varied from country to country, the main difference being a third brake light in the spoiler and two brake lights per cluster ("Jap spec") instead of one.