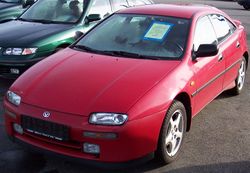 The Mazda Lantis was a series of two cars sold in Japan from 1993 to 1996. In the rest of the world it was also known as 323F, Astina, Allegro Hatchback or Artis Hatchback. 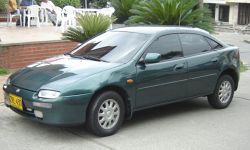 Mazda Allegro HB in Colombia, this type of engine is 1600cc. 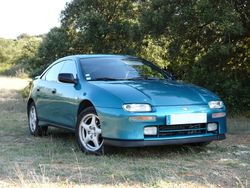 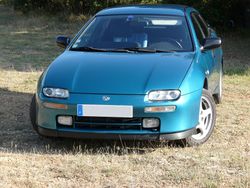 The Mazda Lantis used Mazda's CB platform, which means close relations to the Eunos 500/Xedos 6 and the 1994-1997 Mazda Capella. It was a FF layout car with either a manual or automatic transmission.

There were four body variants: a 4-door sedan, two different 3-door hatchbacks and what Mazda called a "4-door coupé", which in common terminology is a 5-door hatchback.

The 5-door was sold as the Mazda 323F in Europe, Artis in Chile and Allegro Hatchback (HB) in Colombia and a few other countries of Latin America. This model was penned by Ginger (Arnold) Ostle, who was at Porsche before he arrived at Mazda, and thus some consider the 5-door to be closely related to a stillborn 4-door Porsche proposal.

By the time the cars premiered in August 1993, Mazda's multi-brand strategy had become difficult to sustain, so both Lantis variants were released to Mazda, Efini and Eunos dealerships. Sales in Japan was lacklustre throughout the Lantis' production run, but the 323F proved to be immensely popular in Europe and some Latin America countries, where it sold in reasonable numbers right until it was discontinued.

The name Lantis is created from the Latin phrase "Latens Curtis".

The "Astina" has been selected for "Jackie Chan" trophy in 1995 and 1996 Macau Grand Prix driven by the Hong Kong actress with racing driver sitting beside to assist them.