The Mazda Tribute (Code J14) is a mid-size car-based Crossover (automobile) made by Japanese automaker Mazda since 2001. It is jointly developed with Ford Motor Company and based on the front-wheel drive Mazda 626 platform, which is in turn the basis for the similar Ford Escape on the CD2 platform. The Tribute is priced below the Ford Escape and Mercury Mariner in Ford's CD2 SUV lineup.

The Tribute and Escape debuted in 2001, offering front or all wheel drive and a choice of a transversely-mounted 2.0 L Ford Zetec 4-cylinder engine or 3.0 L Ford Duratec V6. Ford Escape was also sold as the Ford Maverick in Europe with a Ford 2.0 L I4 Zetec engine with manual transmission, or 3.0 L Duratec coupled to automatic transmission.

One main difference between the Tribute and the Ford Escape/Maverick is that the Tribute's suspension is tuned for a firmer ride than the Escape/Maverick, in order to correspond with Mazda's sporty image. It is also Mazda's oldest SUV still in production.

The Tribute made its debut at the 2000 Los Angeles Auto Show. In the United States, it somewhat filled the gap left by the Mazda Navajo, a rebadged Ford Explorer, (which was retired in 1994), while in most other countries it was the first Mazda-badged SUV ever sold. Also, in Japan, Mazda had an SUV called the Mazda Proceed Levante, a rebadged Suzuki Escudo prior to the SUV's debut. The Ford plant in Claycomo, Missouri assembled Tribute for the North American market, alongside Ford Escape. The Mazda plant in Hofu, Japan and the Ford Lio Ho plant in Taiwan assembled Tribute for their respective markets. The 2001-2006 Mazda Tribute featured plain-looking but comfortable roomy interior. It had decent hadling and car-like ride. 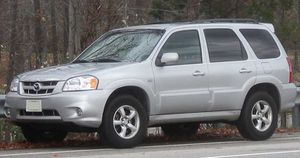 Both the Escape and Tribute were refreshed for 2005. The base engine became the Mazda 2.3 L MZR 4, and the top remained the 3.0 L Duratec V6. In North American built models, a floor mounted automatic transmission shifter replaced the column shifter. However, Japanese-built models continued with a column shifter. Mazda decided to halt production after the 2006 model year for the Tribute, and a hybrid version of the Tribute has been introduced alongside the next generation Tribute as a 2008 model.

A significantly face-lifted version of the Tribute was released in the second half of 2006 for Asia Pacific markets. The updated Tribute featured a larger, bolder grille, with an enlarged Mazda emblem, as well as restyled front bumper and headlights. Side mirrors featured integrated indicators.

On the inside, changes included a new floor mounted automatic transmission shifter, in place of the old column shifter (Asia-Pacific model only; US-built Tribute gained the floor shifter in 2005). The dash was updated with a brand-new radio and automatic climate control with digital read-out, on certain models.

Mechanically, the rear drum brakes was replaced by disc brakes.

Engines remain the same, but the V6 has been modified to reduce fuel consumption by over 10%, while the 4-cylinder has improved mid-range torque and an electronic throttle. Both engines had been certified to meet Euro III emission regulations.

Starting with model year 2007, Mazda stopped selling and producing Tribute in Japan, and replaced it with similar sized CX-7, later on in 2007, Mazda Australia also discontinued the Tribute, the absence of the Tribute being filled by the Mazda CX-7. For other Asia-Pacific markets, the production of Tribute was shifted to the Ford Lio Ho plant in Jhongli, Taiwan, which also produces Tribute's twin, Ford Escape, for the Asia-Pacific markets.

For the 2008 model year, the Tribute was significantly revamped, like its Ford Escape and Mercury Mariner siblings. Originally set to be renamed the Mazda CX-5, the vehicle kept the Tribute name. The changes were significant, but fell short of a "clean sheet" redesign, as the vehicles remained on the CD2 platform, and kept the old 2.3L MZR I4, and 3.0L AJ V6 engines. Visible changes include all new sheet metal and interior. The interior was significantly upgraded using all new components and higher quality materials, and was generally praised by automotive journalists.[2]. However, unlike the first generation of the Tribute, which had unique exterior and interior from its siblings, the new model only differs from its siblings in the "nose" (front fenders, hood, and front fascia), tail lights and detailing. Notable changes to the exterior include higher belt line, and more pronounced wheel arches. Overall the car was to look larger and more substantial than the previous model. As a cost saving measure, the rear brake was reverted back to drum brake, with predictable criticisms [3] [4].

A new addition was the Hybrid model which was previously only available on the Ford Escape and Mercury Mariner.

Another significant change was the switch to Ford's new 6F 6-speed automatic, which became standard on all V6 equipped models and optional on the I4. As well, new front and 18.5 mm (0.73 in) rear stabilizer bars were added for 2009 to improve ride handling after complaints about diminished performance following the 2008 changes. Others changes included redesigned seats, daytime running lamps, optional steering mounted audio controls, and other additional features.