Merkur, the German word for Mercury, was an automobile brand which was briefly marketed by Ford Motor Company in the United States and Canada from 1985 to 1989. The brand made only two entry-level luxury cars (as a smaller companion to Lincoln's large luxury cars), and Ford's creation of the Merkur brand led to Honda creating a captive import luxury brand called Acura (a brand also known for small luxury cars) for the 1986 model year.

Ford introduced the Merkur brand as a franchise separate from its other brands, and it was only offered to Lincoln-Mercury dealers, of which only about 800 accepted.

When the Merkur name was launched in North America, advertising and PR materials strongly urged the proper German pronunciation, "mare-coor," but practically no one used it and the cars were generally called "Merkers". Below the Merkur badge was a script stating "FORD WERKE AG-Cologne, West Germany", indicating the car's place of manufacture.

Like the Capri before it, the Merkur was Ford's attempt at selling a European car in the North American market. However, Ford could not just import the cars and sell them; American government-mandated safety regulations dictated that Ford modify the design of the XR4Ti and Scorpio. This meant that the two cars were manufactured in Europe in a manner different from other European Fords. The XR4Ti was manufactured by Karmann in Rheine, Germany, with a turbocharged Ford Lima 2.3 L 4 cylinder engine from the Ford engine plant in Taubate, Brazil, and the Scorpio was manufactured in Ford's Cologne plant and fitted with the Cologne 2.9 L V6. 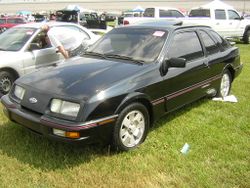 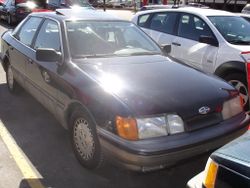 Neither model was particularly successful in Ford North America's eyes. Exchange rate fluctuations were one explanation. Also, the Scorpio bore a strong resemblance to the Mercury Topaz, and the similarly-sized Mercury Sable, which were sold on the same showroom floors and were considerably cheaper.

Merkur Scorpios are well known for being nearly identical to each other in appearance and options. All of them had standard features, such as Automatic Climate Control, and the optional Touring Package upgrade was included with nearly every Merkur Scorpio sold. The original cost of a Merkur Scorpio was nearly USD $30,000.00. A major factor in the decision to drop the cars was the US government's requirement to add either a passive restraint system or air bags for US models since these were not requirements for European models. The XR4Ti was dropped first and the Scorpio a few months later in 1989.

The spirit of the Merkur brand was revived with the 2000 Lincoln LS, Lincoln's then-new small rear-wheel-drive sedan.

Contrast to Ford of Europe

It is interesting to contrast the relative failure of the Merkur vehicles compared to the success of the European versions.

The Sierra was introduced as a replacement for the aging Ford Cortina/Ford Taunus, which was a bold move at the time considering that the Cortina/Taunus was one of Ford's best selling cars. Despite Ford's initial misgivings about the styling, Sierra went on to be the second best selling car in Europe , second only to Ford's own Escort.

At the other end of the spectrum the Sierra Cosworth would do 0-60 mph in 6.2 seconds and go on to a top speed of almost 150 mph (240 km/h) (and still be capable of over 20 Template:Convert/fourmig (Template:Convert/L/100 km mpgus) if driven gently). Oddly, the Sierra XR range and the Cosworth models are not viewed as sales flops in Europe, despite individual models selling fewer cars than the XR4Ti.

Like the Sierra, the Scorpio was also introduced to replace another popular model, the Ford Granada, so popular in fact that in the UK and Ireland the Granada name was still used with the Scorpio name reserved for the top of the range Granada models. The Scorpio started life as a 5-door hatchback, and it later became available as a 4 door sedan and a 5 door wagon. An "executive express" in the form of the Scorpio Cosworth was produced, powered by a 2.9 litre, 24 valve Cosworth V6 motor. This featured 16" aluminum alloy wheels similar to the AMG Mercedes wheels, a rear spoiler, and additional ground effects.

Before Ford pulled the plug, there were rumors that it would begin sourcing South American-made Sierras, but nothing came of this. There are accounts of a 16-valve turbocharged engine that was in prototype stage as well. This engine was never produced.

Merkurs have not so far generated much interest in the collector market. Several active owner communities exist, and parts can still generally be found, although some may have to be obtained from Europe. Merkurs are considered very rare cars on the roads today, and considered one of the rarest '80s automobiles.

The XR4Ti shares its engine, the "Lima" 2.3L OHC, with the Mustang SVO and the Thunderbird Turbo Coupe, making it relatively easy for North American owners to find mechanical parts for the engine.

The XR4Ti's turbocharged engine is very robust and fairly easy to modify to produce additional power and torque. Popular performance modifications to the XR4Ti are: larger turbochargers, larger intercoolers, and the heavier duty T5 transmission from the Mustang or Thunderbird Turbo Coupe. Easy upgrades to 4-wheel disc brakes and heavier duty suspension systems are quite common as well. Merkur Scorpios also have generally easy maintenance, except for specific design features to the car's interior and body.