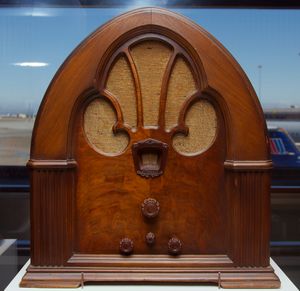 Philco, the Philadelphia Storage Battery Company (formerly known as the Spencer Company and later the Helios Electric Company), was a pioneer in early battery, radio and television production as well as former employer of Philo Farnsworth, inventor of cathode ray tube television.

Philco's rise to the top of radio makers was an amazing feat. While other makers like Atwater-Kent, Zenith, RCA and many now forgotten others (Freshman Masterpiece, Fada, Grebe, etc) sold many battery-powered radios in the early 1920's, Philco only made batteries, "socket power" units and battery chargers. With the invention of the rectifier tube which allowed radios to be operated from the wall socket, Philco knew their business was doomed, and decided in 1926 to get into the booming radio business. By 1930 they would sell more radios than any other maker and hold that first place position for over 20 years. Basically, by sitting out the early 1920's development years of radio Philco jumped into the game right when it was taking off, and zoomed ahead of its competitors.

Philco built many iconic radios and TV sets, including the classic cathedral-shaped wooden radio of the 1930s (aka the "Baby Grand"), and the very futuristic (in a 1950s sort of way) Predicta series of television receivers.

From its inception in 1892 until 1904, the company that eventually became known as Philco manufactured carbon-arc lamps. As this line of business slowly foundered over the last decade of the 19th century, the firm experienced increasingly difficult times.

Philco (as the Philadelphia Storage Battery Company) began in 1906 making batteries for electric vehicles. They later supplied home charging batteries to the infant radio industry. From 1920 to 1927 all radios were powered by storage batteries, which were fairly expensive, and often messy in the home. A very successful product, called the "Socket Power", was a rectifier unit that allowed users to operate their battery powered radios from standard wall current. The Philco brand name appeared in 1919. By 1927 over a million of these units had been sold. However, the invention of the vacuum tube rectifier (incorporated into the coming 1928 line of radio sets) made this technology obsolete.

In 1926, Philco decided to begin making radios. [1]. The first Philco radios were introduced in mid 1928. A total 96,000 radios were produced that year, making Philco radios 26th in the nation in production volume. Up to that time, most radios were handmade and priced for relatively wealthy consumers. Atwater-Kent was the leading radio seller, co-incidently, they were also located in Philadelphia.

The Philadelphia Storage Battery Company decided that prices of radios could be scaled for a mass market by incorporating assembly line techniques then only used by the automobile industry. By the 1929 model year, Philco was in third place behind Atwater-Kent and Majestic (Grigsby-Grunow Corp)in radio sales. In 1930, the company sold 600,000 radios, grossed $34 million, and was the leading radio maker in the country. By 1934 they had captured 30% of the domestic radio market[2].

Philco radios were notable for their economy of design without sacrificing quality or durability. Like other makers of the era, they offered a wide line of radios, beginning with little 5 tube sets all the way up to high-fidelity consoles with 20 tubes in 1937-8. Philco also made battery powered radios which were by then called "Farm radios", most of which had cabinets identical to their AC powered versions. The Philco "Baby Grand" (today called "Cathedral" radios by collectors) was a shape that featured an arched top that wrapped from the sides over the top. This was for economical reason partly, as one piece of wood formed both the top and sides. Philco sold far more of this style than any other maker, and many of them exist today in collections. By today's standards, most of them are still excellent performing AM band radios when restored.

A few of their innovations were very futuristic. From 1939 to 1941 they sold radios that were remotely operated by wireless controls. This feature was not offered by any other maker until the 1970's stereo receivers. Another interesting product was the Philco "Beam of Light" 78 RPM record players offered in 1941 and 1942. These units had a tiny mirror attached to the player's needle. A beam of light was focused on the mirror which caused a vibrating light to hit a solar cell and produce the audio signal. While this system had some advantages over the standard crystal phono cartridge of the time, it was unreliable and is today a very difficult unit to restore.

By 1954, Philco had led the radio industry in volume sales for 24 straight years, selling over 30 million radios[3].

The Philco Predicta TV set was introduced in 1957 for the 1958 model year. It was a black and white television with the picture tube mounted in a unique steerable pod on a pedestal. There were many versions: 17" or 21" picture tubes, wood or metal cabinets and table or floor standing versions, some with rare UHF tuners. It turned out to be a very dogged design, and cost the company dearly in repairs and reputation. Many of them were sold to motels and bars due to the convenience of the swivel tube arrangement. It was discontinued in 1960; a great failure for Philco, like the Edsel automobile was for Ford, which ironically ran the exact same model years. Today the Predicta is a collector's favorite and restored examples can easily be found.

In 1962, the Philco 2000 Model 212 computer was chosen for use in the North American Aerospace Defense Command's famous Cheyenne Mountain facility. Three of the machines were installed that year and ran until 1980. The machines were also used by research labs at Westinghouse Electric and General Electric. The Philco S-2000 Transac was the first solid state computer. It used discrete transistors instead of vacuum tubes, the integrated circuit not yet invented.

In later years, they produced automotive electronic controls, aerospace tracking systems, and artificial satellites. In 1960, NASA contracted Philco to build the world-wide tracking station network for Project Mercury, and all subsequent Man-In-Space projects until the ground station network was replaced by the TDRS communication satellites in the 1990s. Philco's Western Development Labs ultimately became Space Systems/Loral, which continues to manufacture spacecraft as of 2008.

Acquired by Ford Motor Company on December 11, 1961 and renamed Philco-Ford, it continued to make many car radios for Ford vehicles as well as its other products. Eventually, the name was abandoned. Ford sold Philco to General Telephone and Electronics (who also owned Sylvania) in 1974. The Aerospace portion of Philco Ford was renamed Ford Aerospace in 1976.

The company was acquired by Philips in 1981 in order to gain the rights to use the Philips trademark in the United States. (Philco had been able to keep Philips from using its trademark legally because of the similarly sounding names.) Philips continues to use the Philco name for promotional consumer electronics and has licensed the name for private brands and retro style consumer electronics. Philips also is using the Philco brand name for digital converter boxes for analog TVs in the USA[4]. The Philco brand in this case is being licensed by Philips to Funai, who is manufacturing these boxes.

In Brazil, Philco (then Philco-Hitachi) was acquired in 1989 by Itautec, becoming Itautec-Philco and in August 2005 Itautec sold Philco to Gradiente. In August 2007, Gradiente sold the brand to a group of investors, who intended to license the brand to Brazilian appliance maker Britânia.[1]

In 2003, the Merloni Group acquired rights to the Philco brand (from Philco International) for use in Italy [2]. The Italian Philco produces household appliances in affiliation with Bendix and Thorn EMI Moyor Electronics (e.g. Bendix 71258 1000 automatic washing machine 1986). As of 2006, the company is mainly recognised in Australia.

In Argentina, in March 2004, Philco was acquired by a group of Argentine investors. The presence of Philco in Argentina dates since 1930, remains a traditional mark of appliances in this country. It currently manufactures refrigerators and white line products by Philco Argentina S.A. and Helametal Catamarca S.A. Argentina [3]